In Search of a Sundance Purpose: A Fest Wrap-Up 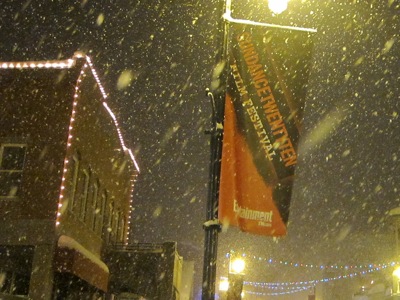 Breakouts and bombs collided in Park City over the past week and a half, but that’s part of the reason the Sundance Film Festival still matters. However, as the conversation shifts from a specific dialogue about movies to questions about the purpose of the festival itself, battle lines have been drawn. Nevertheless, somewhere in the mess lies a kind of internal progressiveness that stands to keep cinematic standards in check.

Public statements took on a new tone. The most provocative moment at last year’s awards ceremony may have arrived when “The Cove” subject Ric O’Barry strode the stage and made a plea for the end of worldwide dolphin slaughter. Or perhaps it was when Lee Daniels, accepting an honor for directing “Precious,” dedicated the award to “every gay little boy and girl that’s being tortured.” It was an evening filled with heated emotional declarations.

By contrast, the biggest rants at the ceremony concluding the 2010 festival took potshots at an easier target: The media. “Three Backyards” director Eric Mendelsohn accepted his award for best director and defended the festival against journalists critical of the festival. “Start your own festivals,” Mendelsohn scoffed. Later, Mark Ruffalo stepped up to the podium after nabbing a special jury prize for his directorial debut, “Sympathy for Delicious” — a movie that had developed negative buzz in the wake of its festival premiere. “We got our asses handed to us by the critics and we’re still here,” Ruffalo declared. Bitter, much?

These combative declarations suggest the perseverance of mediocrity in an environment allegedly intended to highlight the cream of the crop. But there’s room for Mendelsohn and Ruffalo to bathe in the spotlight and complain about the naysayers, too. That’s because Sundance, like other major festivals, functions as a filtration device — a curated window into the state of independent film, which still feels like a mixed bag.

The recently completed program contained a diverse collection of movies that frequently interrogate the definition of independent cinema. Features like “The Company Men” and “The Extra Man” stake their surface value in star-studded casts, yet neither one feels distinctly Hollywood, because they don’t contain immediately marketable content beyond the obvious appeal of their celebrities. But “The Company Men” contains such a patient script that you almost forget it’s essentially a companion piece to the topicality of “Up in the Air,” with Ben Affleck as an unemployed corporate suit in search of a recession-era purpose. Replace Affleck with an unknown and “The Company Men” might look like a Sundance underdog. “The Extra Man,” which stars Paul Dano and Kevin Kline, has no such hook; as a high profile star-filled feature with an incessantly grating script, it ought to be derided; as a mediocre movie, it ought to be ignored.

The point is that Sundance provides a venue to judge movies on an even playing field rather than relying on advertisements and other industrial pressures to guide their visibility. Of course, the movies with stars tend to bubble to the top of innumerable must-watch lists, but that doesn’t make them impervious to criticism — quite the opposite, in fact.

Consider the curious case of “Hesher.” This bizarre directorial debut from Spencer Susser stars Joseph Gordon-Levitt in an utterly insane performance, as his character wanders through the life of a socially alienated child (Devin Brochu) with random expressions of vulgarity and violence, usually after taking his shirt off. But even though “Hesher” lacks a fully developed plot and often defies logic (who the hell is this crazy biker guy, anyway?), it retains lopsided appeal as a result of its unique strangeness. It may not work as an emotional narrative, but it does contain a fiery showcase of Gordon-Levitt’s willingness to reach certain wild-eyed extremes, and Susser demonstrates enough creative audacity to prove that he could, someday, make a good movie. That’s enough of a reason to get it out there, as Newmarket plans to do in the near future.

Yet there are more reasons to get excited about the aesthetically solid movies that landed distribution out of the festival: “Winter’s Bone” and “The Kids are All Right.” Both offer seamless executions of the genre expectations in which they exist: “Bone” exudes a classic detective story vibe, while “Kids” essentially puts a gay spin on the conventions of the suburban family drama.

But if these are the Sundance breakout stories simply because they landed distribution, I should point out some of the other potential breakouts that woefully remain on the market: Taika Waititi’s charming period piece “Boy” and the neorealist zeitgeist drama “The Imperialists are Still Alive!” It’s unfathomable that these intelligent and emotionally complex narratives remain on the market while an atrocity like the Sundance bomb “The Runaways” made a clean getaway from negative reviews by securing distribution before the festival.

Of course, all of these movies face reasonably surmountable challenges compared to the aimless trajectories of several entries in the Next section, few of which made any ripples during the festival. There was one worth seeing, though: Katie Aselton’s “The Freebie,” a strikingly believable relationship drama in which two lovers take a failed shot at an open relationship. Concise and insightful, the movie asks a single basic question — can this work? — and boldly leaves the answer open-ended.

But that’s the exception to the rule. For all the ballyhoo about Sundance rearing the next generation of narrative filmmakers by championing them in Next, the real promise came out of the nonfiction selections. I was blown away by the smart blend of satire and scholarly commentary in “The Red Chapel,” which features “the Laurel and Hardly of Danish-American comedians” Simon and Jacob, traveling to North Korea and bringing humor the oppressed masses. Sebastian Junger and Tim Heatherington’s “Restrepo” brings a closer look at military battles than any other documentary in recent memory, and Josh Fox’s “GasLand” launches a compelling tirade against hydraulic fracturing by injecting a human element into the fray. Henry Joost and Ariel Schulman’s “Catfish,” whether or not it’s entirely true, engages the pratfalls of new media with an unprecedented combination of playful narrative intrigue and pathos. And Banksy’s “Exit Through the Gift Shop” spoofs the vanity and self-interested components of the art world with a free hand. Sundance may or may not have an identity issue, but the quality of these new works indicate a reason to keep hoping that the truth is out there. The search continues.

This Article is related to: Festivals and tagged Features