Hollywood Studio to Back Micro-Budget Movies 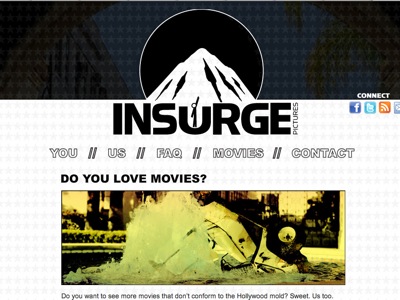 After effectively abandoning specialty films, Hollywood studio Paramount Pictures is expected to officially unveil a new division for micro-budget movies today. Dubbed Insurge Pictures, the unit has one million dollars fueling its films. 10 movies are on tap in the first year at a budget of just $100,000 each.

A formal announcement of the division could come as early as this morning, according to one source.

Said to be headed by Amy Powell, the studios’ SVP of Interactive Marketing, Insurge is emerging in the wake of the tremendous success of “Paranormal Activity,” which was shepherded to success last year by Powell and Paramount’s new media team. Similarly, the new division will utilize grassroots approaches to support their films.

Rather than scouring for finished films at festivals like South by Southwest, which opens tomorrow in Austin, Insurge is currently scouting for filmmaking teams to produce a slate of projects for Paramount. They hope the movies will serve as a low budget proving ground for new talent and intend to release the movies theatrically.

“Aren’t you tired of being fed the same movies wrapped in different paper?” asks the Insurge website, “We want to find and distribute crazy, unpredictable, and hopefully awesome movies – movies that make you want to line up to see at your local theater with all your friends (and us). Movies that a big studio would never release because they’re too risky, too silly, and they don’t star Sandra Bullock.”

The studio will develop an online community to fuel the initiative and is expected to support their goals with additional elements that are still to be announced. Horror films, comedies and animated movies are among the projects the division is aiming to produce, according to a source, targeting moviegoers in the 13 – 34 year old age range.

Prominently featured on the Insurge site are direct links to the unit’s Twitter and Facebook pages. Fans of the site will be invited into the production process and potentially involved all the way through a movie’s eventual release.

“We want to build a community online to engage people in the filmmaking process,” explained an insider connected to the division. For example, fans may help cast a role in a film or vote on a film’s one sheet. “We want to open it up, engaging [fans] in the process and keeping them involved.”

“Insurge Pictures is devoted to the distribution of micro-budget movies and we’re the little crew running it,” reads the division’s website. “We want to try something different and deconstruct the Hollywood system. We’re about to conduct an experiment and we’re building a team of mad scientists to help.”

Additional details will be reported when the new division is formally announced, perhaps as early as this morning.