As the film conference portion of the SXSW Film Festival came to a climaxed today in Austin, TX, organizers announced the winners of 2010 festival tonight. Organizers unveiled the full list of winners tonight, even as the award ceremony continued in an Austin theater.

Dunham, a twenty-something woman who debuted her first feature this week in Austin, was clearly thrilled to win the award. “This is a movie about a girl with a pot belly, whining,” Dunham said, “So I am amazed and happy that the jury took to it.”

“And I want to say this is amazing to win just one week after Kathryn Bigelow winning the Oscar,” she continued, “Which was a big fucking deal for me. So thank you.”

“Tiny Furniture” is the story of 22-year-old Aura, who returns home after college to her artist mother’s loft with the following: a useless film theory degree, 357 hits on her YouTube page, and no shoulders to cry on.

The festival’s Audience Awards for Spotlight Premieres, Emerging Visions, 24 Beats Per Second, Lone Star States, and Midnighters will be announced on Monday.

Award winners are being update as they are announced in Austin, TX. 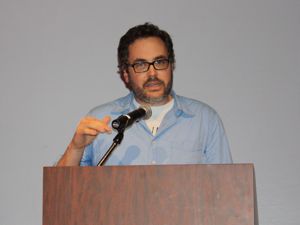 DOCUMENTARY FEATURE
Winner: For Once in My Life
Director: Jim Bigham & Mark Moormann

Runner Up: White Lines and The Fever: The Death of DJ Junebug
Director: Travis Senger

Runner Up: One Square Mile of Earth
Director: Jeff Drew

Special Award – The Chicken & Egg Pictures “We Believe in You” Award:
Martha Stephens for Passenger Pigeons