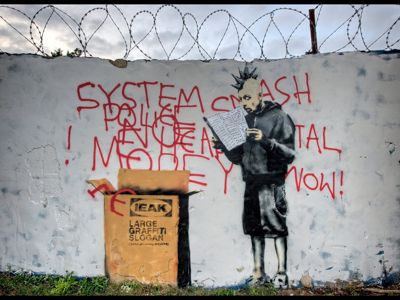 “Exit Through The Gift Shop,” the mysterious is-it-a-documentary from the equally mysterious British street artist Banksy, entered the market on eight screens in New York, Los Angeles, and San Francisco this weekend. The result was a potent showing from a film that defied traditional release strategies, utilizing social media to get the word out. In addition, strong numbers also came this weekend from Argentine director Juan José Campanella’s Oscar winner “The Secret In Their Eyes” and James Ivory’s “The City of Your Final Destination.”

According to estimates provided by Rentrak earlier this afternoon, “Exit Through the Gift Shop” grossed $166,126, and averaged $20,770. For a film being released through a uniquely upstart DIY distributor, and for one with little traditional means of marketing, these are impressive numbers (UPDATE: The estimates proved to be a bit under, with “Gift Shop”‘s final total at $170,756 and the per screen at $21,345).

For “Gift Shop,” Cinetic Media’s John Sloss – who represented rights to the film at Sundance (and then Berlin) – co-founded a distribution entity called the Producers Distribution Agency with his Cinetic partner Bart Walker. With a team including Richard Abramowitz, Donna Daniels and Marc Schiller, the company decided that despite offers coming in the wake of “Exit”‘s acclaimed screenings in Sundance and Berlin, it was a highly unlikely project for a traditional distributor. Sloss explained last week that this was due to the fact that not only is Banksy very controlling, but you can’t talk to him (Sloss himself never expects to meet the elusive man).

Today Sloss told indieWIRE that they are “obviously thrilled” with what resulted this weekend. “We had very little P&A to work with in buying traditional awareness,” he said. “We did not have a ‘money’ New York Times review. So I think this is close to unprecedented to make this kind of film work with very limited resources.”

So how did it work, at least so far? Sloss said that he and his “Exit” team (including Richard Abramowitz, Donna Daniels and Mark Schiller) focused on a lot of non-traditional media and screened “the hell out of it” to try and get word of mouth going.

“If you go on to Twitter and type in ‘Exit Banksy’ – every 30 seconds there’s a testimonial of the film… It’s encouraging to me be because this is a film that is social media friendly and we knew that. It really feels like you can make a film work with these methods.”

Sloss said that New York’s Sunshine and Los Angeles’ Arclight were both standouts for the film, “attesting to our point about younger, less traditional specialty audience.” The film will expand in “a classic restrained platform” manner over the coming weeks, with exclusive screens in Boston, Philadelphia and Seattle on tap for next weekend.

Also opening was “The Secret In Their Eyes,” Juan José Campanella’s film that surprised many by taking the best foreign language film Oscar over “The White Ribbon” and “A Prophet” (oddly enough, all three films are being released through Sony Pictures Classics). “Eyes” grossed $176,389 from its 10 screens, giving it a $17,639 average. That puts the film almost exactly on par with “A Prophet”‘s February debut, where it averaged $18,197 from 9 screens. “A Prophet” just hit $1,805,286 now in its eighth weekend. “Secret” will expand over the next few weeks.

The film that actually scored the highest per-theater-average of the weekend was the single screen debut of James Ivory’s “The City of Your Final Destination.” Starring Anthony Hopkins, Laura Linney and Charlotte Gainsbourg, “City” grossed an impressive $22,000 from its exclusive opening at the Paris in New York. The Screen Media Films-released “City”‘s true fate comes next weekend, when it expands beyond the Paris and into metro NY and LA.

A much more aggressive debut came care of Roadside Attractions’ release of Derrick Borte’s Demi Moore-David Duchovny film “The Joneses.” On 193 screens in 68 markets, the film managed $554,489, or $2,873 per-screen. While certainly not a major success story, these numbers aren’t bad for a release of this size, or for a mildly buzzed about film like “The Joneses.” Roadside opened in a combination of specialty venues and more commercial theatres, and saw a 43% increase in grosses from Friday to Saturday, which is a good sign for the future. Roadside’s Howard Cohen told indieWIRE this morning that the distributor plans to hold at roughly this number of screens with maybe some small expansions within markets.

Other openers included IFC Films’ release of Bahman Ghobadi’s Iranian “No One Knows About The Persian Cats,” which grossed $8,600 from its 2 screens, averaging $4,300, and Paladin’s release of Bette Gordon’s “Handsome Harry,” which opened in four theaters in NY, LA and South Florida for a gross of $13,500 and a per screen average of $3,375. The IFC Center in New York did nearly $8,000 for the weekend, featuring a number of sell out shows.

Last weekend’s top debut, Maren Ade’s “Everyone Else,” expanded from 1 to 2 screens, and saw its grosses take a bit of a tumble. Its total gross was $8,494, for a $4,247 average. A whopping $7,332 of its overall gross came from New York’s IFC Center, despite only 65 seats in the theater. While that’s an impressive feat, the fact that its other screen – the Garden Cinemas in Norwalk, CT – only managed $1,162, is not.

Also falling off from its debut was Tom DiCillo’s The Doors documentary “When You’re Strange.” DIY released through Abramorama, the film grossed $20,448 from 8 screens, averaging only $2,556. The film’s total stands at $116,692.

Holding up a bit better was Peter Bratt’s drama “La Mission,” which expanded from 15 to 22 screens and saw its per-theater-average rise from $3,270 last weekend to $5,909 this weekend. Its weekend gross was $130,000, including two particularly impressive San Francisco theatres, where the film takes place. The AMC Metreon grossed an estimated $40,000 and the Kabuki an estimated $33,000, both huge numbers. Co-distributors Screen Media Films and Global Cinema Distribution will expand the film in the coming weeks. Its total to date is $200,223.

Anchor Bay’s “City Island” – starring Andy Garcia and Julianna Margulies – continued to be an under-the-radar success story. Going from 45 to 57 screens, the film grossed $259,000. That made for a 30% increase, seeing its per-theater average actually rise despite a higher screen count ($4,544 vs. $4,422 last weekend). After five weeks, “Island” has taken in $842,858, and should soon become the first $1 million grosser young Anchor Bay’s history.

Finally, checking in on another specialty success story now in its ninth weekend of release: Summit Entertainment’s release of Roman Polanski’s “The Ghost Writer.” Falling off only 17% despite losing 85 screens, “Ghost” grossed another $683,000 this weekend, taking its total to $12,570,000. That makes it one of Summit’s top ten grossers ever, and gives it the highest take of a 2010-released specialty film so far.

This Article is related to: News and tagged The Secret In Their Eyes