iW begins this week’s production column, ‘In the Works’, by talking with Heidi Ewing and Rachel Grady – the makers of acclaimed documentaries “Jesus Camp” and “12th and Delaware” – about their new project, “Detroit Hustles Harder,” then profile a few upcoming films featured on crowd-funding websites Kickstarter and IndieGoGo.

EDITORS NOTE: “In the Works” is a weekly column taking a look at upcoming films, in addition to projects in production. It spotlights films in development, as well completed films that are taking creative paths towards distribution and occasionally ventures away from films to look at other types of projects, such as interesting new film distribution, funding, or exhibition mechanisms.

“This is a different approach for us and it’s a creative challenge for us,” said Heidi Ewing about the latest project she is co-directing with longtime collaborator Rachel Grady. “Usually we start using a small story that conveys a broader idea, but we’re going backwards with this one.”

Ewing and Grady’s recent projects, including the Oscar-nominated “Jesus Camp” and their latest, “12th & Delaware” (which will be broadcast by HBO this Summer) focused on individual characters who represent a broader cultural context. This summer, the filmmaking pair will turn a spotlight on Detroit and are currently searching for individuals to represent the city, which has personified the downside of the global economy.

“It’s a city on its knees that everyone has left for dead,” said Ewing. “But we’re going to focus on the dreamers and hustlers – people who think they can make the city great again.”

Using the working title “Detroit Hustles Harder,” Ewing and Grady will chronicle the lives of several people that have made a conscious effort to stay in the city and are attempting to beat the odds and re-invent Detroit, which today stands as a shell of its former self.

“We chose Detroit because our thesis is that so goes Detroit, so goes the nation,” said Grady, who is also from the Motor City. “We have all these people with skills, but we don’t make anything anymore. It’s not just a regional story either. It’s a former success and was the birth of the American middle-class.” Continuing, she added, “It’s a litmus test for the rest of the world, or at least the country, on how we’re going to re-invent ourselves…”

Grady and Ewing plan to shoot for about a year and pointed out that Time Magazine is focusing its attention on the city as well over the next 12 months. While they’re still in search mode for individual stories that will represent the city in “Detroit Hustles Harder,” they’re keeping their ears to the ground on a number of themes including people who are using abandoned buildings to create art, laid off auto workers who are buying and selling $500 homes, and they’re even looking at some proposals to return this bastion of industrialism back to farming.

Despite its prospects, Ewing said “There is a lot of young energy coming to this city,” and they’re determined to find it. Unlike “12th & Delaware,” which received financial backing from HBO ahead of production, the filmmakers are taking this project on alone and are going to foundations and other private money sources as they prep the formal shoot. 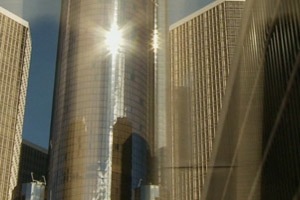 A scene from Rachel Grady and Heidi Ewing’s “Detroit Hustles Harder.” Image courtesy of the filmmakers.

“This is not going to be completely depressing, but it’s a city that many think is over,” said Ewing. Grady added, “A version of it is over, and [this film] is about what it will become… I believe this is a way of exploring the American identity.”

Logline: “Melvin” is a slow-burn road movie and the fractured portrait of Melvin Mills, a cross-country wandering misfit struggling to express himself.

About the film: Multi-hyphenate Chris Ohlson describes the starting point for “Melvin” as a desire to make a “cinematic home movie” from the perspective of their protagonist. With their actor, Jef Greilich, set and with the endgame in mind, the filmmakers, who have collaborated on other projects before, let the character loose to interact organically with his surroundings. As signaled by the film’s title, their focus is on creating an in-depth portrait of a singular character. As Ohlson explains, “The inner workings of a mind bent towards destruction are fascinating to me, and this film and this character were a way to explore that.”

Current status: The project is currently in post-production, with an anticipated completion in the late summer. Producers are currently running a Kickstarter campaign to raise funds to cover a number of post-production costs, including the final sound mix, color correction, and the output of a high definition master.

For more information and to support the film: http://kck.st/9KG7iH. Note that while the filmmakers have met their funding goals, additional donations may be made until the May 2nd deadline. 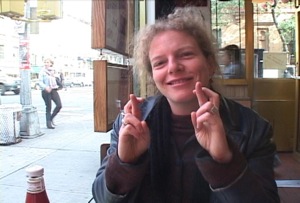 A scene from Deirdre Fishel’s “Sperm Donor X.” Image courtesy of the filmmaker.

Logline: Despite the fact that only 6% of American children will grow up in a “traditional family,” filmmaker Deirdre Fischel never imagined having kids solo. “I mean it’s not like when you’re a little girl you think, ‘Oh yeah, I’m gonna grow up one day and buy my sperm over the Internet…’”

About the film: Filmmaker Deirdre Fishel is no stranger to projects involving women and their bodies – her previous documentary, “Still Doing It: The Intimate Lives of Women Over 60,” profiled a diverse set of older woman discussing their sex lives. With “Sperm Donor X,” Fishel brings her own story into the mix: “I began [making the film] at 40, when I found myself at a precipice. I wanted to at least try to have a biological child, yet doing it alone with donor sperm felt bizarre and terrifying.” She related her own story, and those of three other women having children alone via sperm donation, for two years. While she struggled with the idea of completing such a personal film, Fishel realized that the documentary could help normalize the process for others contemplating going through it.

Current status: “Sperm Donor X” is nearing completion, with a sound mix and color correct planned for this summer. Fishel notes that the production has raised $20,000 out of a $35,000 grassroots funding drive, and are also currently running a Kickstarter campaign to raise an additional $3000 for licensing archival footage and other post costs.

For more information and to support the film: http://kck.st/cLum7u. As with all Kickstarter campaigns, the filmmakers will not receive any donations unless they meet their fundraising goal of $3000 by their May 6th deadline. 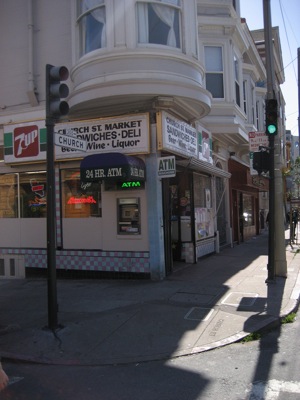 A scene from Katherine Bruens’ “Corner Store.” Image courtesy of the filmmaker.

Logline: “Corner Store” is a documentary profile of Yousef Elhaj – beloved shop owner, Palestinian immigrant, and long-distance father – and his resoundingly universal tale of hard-won choices for a better life, now set on the backdrop of San Francisco and modern-day Palestine.

About the film: Bruens and her team overcame Elhaj’s initial wariness to gain his trust and access to the unassuming immigrant’s life. Having spent ten isolated years operating a small shop in San Francisco in order to provide for his family back in Palestine and to set up a legal path to have them join him in the US, Elhaj makes the journey back home to make final preparations – only to be confronted with a vastly changed homeland. The filmmakers see in Elhaj’s story a universal one: “’Corner Store’ will not only resonate with those from the Middle East but also with millions of immigrants across all ethnicities, parents of all ages, and anyone who has had to make great sacrifices to meet a long-term goal.”

Current status: While “Corner Store” has already generated some exposure through a recent work-in-progress screening at SF’s IndieFest, the filmmakers are currently in the last stages of making their final festival cut, and have been running a $2,670 IndieGoGo campaign to help cover associated costs. They are continuing audience-building efforts and outreach for both traditional and non-traditional opportunities to connect with viewers.

For more information and to support the film: http://www.indiegogo.com/CornerStore . The funding deadline for this IndieGoGo campaign is May 30.

A still from Michael Chance’s “Project Arbiter.” Image courtesy of the filmmaker.

Logline: Set in 1943 at the height of World War II, “Project Arbiter” is the code name of an experimental O.S.S. unit. This short film is a sci-fi espionage story that demonstrates how a small quiet victory tips the balance of power and foretells the outcome of WWII.

About the film: “Project Arbiter”’s Michael Chance notes that he’s always had a fascination with science fiction and with World War II. These interests combine in his ambitious WWII noir dramatic short about a prototype suit that renders its wearer temporarily invisible. Based on historical events, and conspiracy theories involving WWII special operatives from the O.S.S. and British S.O.E., “Project Arbiter” promises to offer big-budget action thrills at a fraction of Hollywood costs. The project’s teaser trailer has already impressed fans of sci-fi, action, and war films, and created an eager and growing fan-base awaiting the completed film.

Current status: The film is currently in late pre-production stages, with principal photography scheduled for early May. Producers are currently running an IndieGoGo campaign to raise $25,000 towards production and post costs.

For more information and to support the film: http://www.indiegogo.com/ProjectArbiter . There is no deadline for funding.

Also currently In the Works:

“Hackonomics: No Hacking, No Surfing,” directed by MK2’s Etienne Rouillon and produced by Charles Gillibert, is currently in development by MK2’s 360° multimedia label and is set to go into pre-production later this month, with production planned for the fall. The documentary looks at the history of web piracy and hackers, from Napster to Pirate Bay, and assesses the current, ever-changing culture of illegal downloading and social media networking and their impact on the Internet.

This Article is related to: Features and tagged In The Works