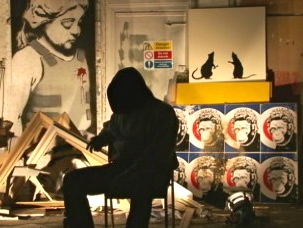 From the moment elusive street artist Banksy appears on camera in “Exit Through the Gift Shop,” something seems fishy. With his face obscured by shadows and his real voice rendered unrecognizable by mechanical distortion, Banksy remains the mysterious figure he has always been. In “Exit,” the context of his anonymity shifts from public vandalism to cinema, an equally appropriate venue for creative tomfoolery. (Other critics have aptly compared it to Orson Welles’s 1974 essay film “F for Fake.”) Although the movie ostensibly tells a true story, much of what appears on screen raises the possibility of a trickster behind the scenes, expanding its allure.

A blend of talking heads and dubious home video footage, “Exit” centers on relentless video diarist Thierry Guetta, a jolly Los Angeles-based Frenchman whose aimless interest in shooting street artists led him to become chummy with Banksy himself – or so we’re led to believe. Non-fiction purists can easily dream up conspiracy theories about the nature of the movie and the category where it belongs (I’m fairly convinced it’s a hybrid of some sort).

According to the plot, Thierry’s footage of Banksy and other artists never yielded a finished product, so Banksy took on the reins, while his goofy protege seamlessly transitioned into a visual artist on his own, taking on the persona of pop art provocateur Mister Brainwash. It all holds together well enough for one to take this information at face value, although it’s equally possible to imagine Mister Brainwash as an invention of Banksy devised to spoof the art world. Even Banksy has slippery definition, to the point where “he” could be several people or pure fiction. From the title to the narrative, “Exit” is a multi-layered riddle wrapped in a mystery inside an enigma…or maybe just an old fashioned prank.

However, these lingering possibilities never detract from the movie’s giddy spirit and spot-on assessment of hypocrisy in the community at its center. Just as “Exit” scrutinizes the assignment of aesthetic value to objects of questionable merit, it causes skepticism about the validity of its content. Viewers can wholeheartedly embrace the ambiguity, because “Exit” retains a light, playful tone consistent with the above-the-law mentality of its subjects.

Aided by Rhys Ifans’s droll narration and a soundtrack that dramatically announces each new plot twist (there are many), Banksy offers his vision of street art as both a cherished and fragile act. His intentions are twofold: As he explains to his theoretical audience, the nature of his illegal practice is such that much of what he and his colleagues create gets washed away shortly after its birth, necessitating documentary proof of its existence. Beyond those archival intent lies a more valiant motive: The runaway monetization of his practice (an original Banksy can sell for millions at Sotheby’s) calls the purity of his intentions into question, and Banksy hopes to prove that “it’s not all about the hype.”

Yet, for Guetta, that’s exactly what it’s about. This tantalizing paradox emerges as the high energy cameraman, in his pre-Mister Brainwash phase, tracks down a series of street artist for his makeshift project (including his alleged cousin, “Invader,” and Shephard Fairey, future architect of the ubiquitous Obama “Hope” poster) on a trail that leads straight to Banksy. Guetta pledges his life to artist, establishing the question of exactly how this strange man manages to support his family without any discernible income. (A cover story in the L.A. Weekly that coincided with Mister Brainwash’s career-making 2008 exhibit suggests he inherited a real estate fortune.) Guetta’s obsession with capturing the artistic process on camera eventually leads him to emulate what he admires rather than innovate — but he manages to succeed anyway, selling $1 million worth of art work in a week.

Superficially playing off his alleged inspirations, Guetta situates himself as a hoax of his own making. The outcome elicits cynicism from Banksy that rings true even if he’s punking us.

Based in Brooklyn, Eric Kohn is indieWIRE’s lead film critic. He writes a blog that is hosted by indieWIRE and can be followed via Twitter.