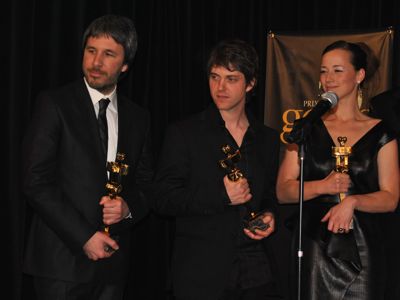 “We didn’t design this film for awards ceremonies or film festivals,” Villeneuve said backstage after the ceremony. “So I am very flattered to recieve these honors.”

“Polytechnique” premiered at last year’s Cannes Film Festival, where Villeneuve said he submitted his next film, “Incendies,” for 2010 consideration. He said he still doesn’t know whether it would play at next month’s fest. “The Cannes people are the hardest people on Earth,” he quipped. “I submitted my film but I do not know if it got in yet. And even if I did, I could not tell you.”

Villeneuve competed in the Director’s Fortnight program in Cannes last year, where “Polytechnique” lost to another Quebec film, Xavier Dolan’s “I Killed My Mother” (J’ai tue ma mere). “Mother” was nearly absent from the Genie festivities, having been snubbed in every competitive category. This oversight was a cause for considerable controversy before the ceremony. Canada’s Globe and Mail ran a story heavily criticizing the Genies for snubbing the film – which had been Canada’s entry for the Academy Awards. The film was clearly the country’s most discussed film on the international festival circuit last year.

“With the 30th annual Genie Awards coming Monday,” The Globe wrote, “the Canadian movie industry will try to ignore for one celebratory night the chronic problems plaguing homegrown film. With just $26-million, or 3 per cent, of the billion-dollar-plus Canadian box office in 2009, according to the Motion Picture Theatre Associations of Canada, Canadian films need all the help they can get. Why, then, do this year’s Genie nominations not reflect some of last year’s most critically acclaimed and popular Canadian films? It’s an issue that confounds commonsense and has raised questions from some film distributors and producers about a nomination process where a handful of people determine which films will be in contention. The most flagrant omission this year was J’ai tué ma mère, the debut film from 21-year-old Montreal wunderkind Xavier Dolan, whose exclusion from the competitive categories lead the film’s French distributor, Louis Dussault to call the Genies ‘totally irrelevant.'”

People didn’t shy away from noting the omission during the ceremony.

“J’ai tué ma mère – why isn’t that in every category,” supporting actress winner Martha Burns said after accepting her award. “It’s too bad we don’t have a more fun, sexier way of showing the world that our films are getting better and more original and bright… Let’s stop boring each other… I’m sorry that Xavier isn’t here.”

Dolan did not attend the ceremony, despite being awarded an honorary, non-competitive Genie for a directorial debut. Quebec producer and vice-chairman of cinema for the Academy of Canadian Cinema & Television Kevin Tierney (who also produced 2007’s “Bon Cop, Bad Cop,” one of the highest grossing films in Canadian history) accepted the trophy on Dolan’s behalf.

“I had no involvement in this film whatsoever,” Tierney laughed. “When I heard there was this scandal, I saw an opportunity to pursue my desperate quest for infamy.”

More seriously, though, Tierney did speak out against “Mother”‘s snub.

“Between you and me, this was an aberration,” he said. “To be ignored and shut out in all the other categories… Anne Dorval gives one of the best performances I’ve ever seen in Canadian history. The fact that he only got this award was sort of like him being sent to the kiddie table. I mean, seriously… There’s something quite preposterous about it.”

Tierney admitted he is on the Academy’s board, and had previously served on nominating committees.

“I’ve been on these juries,” he said. “I know what happens. So let’s call it a draw and say it’s an aberration. And let’s also remember what happened at the Toronto Film Festival. They did not give this the best first film or the best Canadian film award. Uh, hello…” 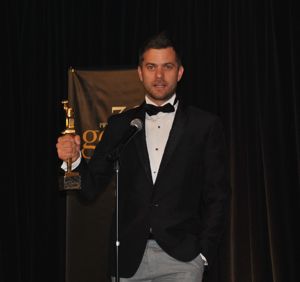 Joshua Jackson at the Genie Awards. Photo by Peter Knegt.

Other major winners included some star power care of Joshua Jackson (of “Dawson’s Creek” and “Fringe” fame), who won the best actor award for cancer road trip drama “One Week.” Noticeably surprised and nervous as he took the stage, Jackson said he “couldn’t believe he’d won something.”

In the press room, a questionable journalist asked Jackson if he’d be calling his “Creek” co-star Michelle Williams to brag that he’d won the Genie while she had lost the Oscar for “Brokeback Mountain.”

“I appreciate the sentiment but that’s definitely not the next call I’m going to make,” Jackson said politely.

This Article is related to: News and tagged J'ai tué ma mère (I Killed My Mother)