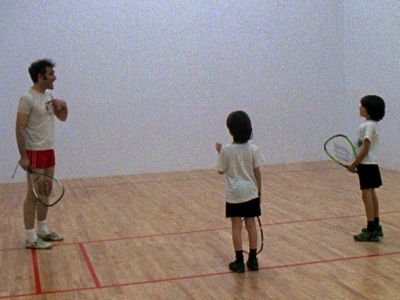 While all eyes were on the 2010 Cannes Film Festival this weekend, some specialty films quietly made their box office arrivals Stateside.

While the opener of this year’s Cannes, “Robin Hood,” managed a so-so $37 million haul in very wide release, two highlights of last year’s edition of the fest made limited debuts to varied results. IFC Films released both Ken Loach’s “Looking For Eric” and Benny and Josh Safdie’s “Daddy Longlegs” this weekend, with “Longlegs” proving financially superior and finding the best debut per-theater-average for a specialty film this weekend. A quasi-autobiographical story of a divorced father and his two young sons, “Longlegs” (which was available on VOD back in January), grossed $8,857 from its sole NYC engagement. “Eric,” meanwhile did not fare as well. A comedy about a depressed Mancunian postman obsessed with football (of the European variety), the film debuted on two NYC screens – grossing only $7,470 for a $3,735 average.

Perhaps the most impressive debut was Roadside Attractions release of Marc Forby’s “Princess Kaiulani.” The film debuted on 33 screens that consisted of 14 screens on Hawaii and 19 on the mainland in NY, LA, SF, Seattle, Las Vegas and San Diego. A historical epic tells the story of the final days of Hawaiian independence and how one young princess stood up to the impending takeover of her nation, the film totalled $184,750 – averaging $5,598 per screen.

“We’re happy with the opening,” Roadside Attractions’ Howard Cohen told indieWIRE today. “Seems we’re reaching in particular the Hawaiian and Pacific Islander audience both in Hawaii and in select markets on the mainland.”

Meanwhile, after successful openings in Los Angeles and Washington DC, Shirin Nehshat’s “Women Without Men” opened the Lincoln Plaza and Quad Cinemas in New York City this weekend, and also found impressive numbers. The film grossed $18,125 for a per screen of $9,063 – taking the Indiepix release’s total to $71,684 as it continues to roll out to markets across the country.

Also making its NYC theatrical debut was “Best Worst Movie,” the DIY-released doc by Michael Paul Stephenson that has proved very popular in festival and special screenings over the past year or so. The film takes on the undisputed worst movie in cinematic history, “Troll 2,” and managed a decent $8,526 gross in New York, taking its total to $18,959 since opening officially in theatrical late last month (in Austin, Texas).

Last weekend’s big debut, Thomas Balmes’ documentary “Babies,” dropped off steeply in its second frame. The Focus Feature release – which follows four babies from four different continents during the first year of their lives – grossed $1,003,996 over the weekend, a 54% drop. Considering last weekend’s positioning with Mother’s Day provided an unusual Sunday boost, the drop is still quite reasonable. After 10 days, “Babies” has totalled $3,900,719 – already an impressive cume for a documentary.

Another film positioned last weekend to debut with Mother’s Day was Sony Pictures Classics’ release of Rodrigo Garcia’s “Mother and Child.” The Annette Bening-Naomi Watts-Kerry Washington omnibus drama expanded from 4 to 24 screens (6 of which were in Canada, where the film is being released through TVA Films). In total, that resulted in a $72,144 gross – and a so-so average of $3,006. “Child”‘s total stands at $130,991.

Finally, the mysterious is-it-a-documentary from the equally mysterious British street artist Banksy “Exit Through The Gift Shop” expanded from 31 to 45 screens this weekend and continued to do good business – crossing the $1 million mark along the way. The DIY-oriented Producers Distribution Agency-released film took in $230,533, averaging $5,123 and taking its total to an impressive $1,284,905.