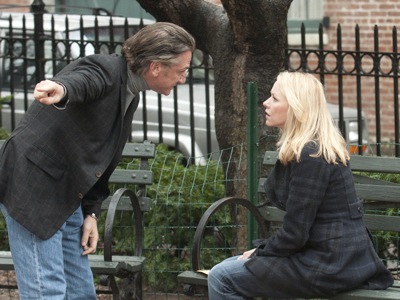 Doug Liman’s “Fair Game” opens with a credits sequence featuring images from the post-9/11 war on terror set to the Gorillaz’s single “Clint Eastwood,” marking the only instance of stylized commentary in this thoroughly subdued dramatization of recent history. The lyrics – “I’m useless/But not for long/”The future is coming on” – signal the shift into a new era of heated public engagement with global threats. But Liman’s fictionalized account of the 2003 outing of former CIA agent Valerie Plame strays from fiery political commentary in favor of an insistently unsentimental tone that only occasionally moves beyond the level of a solid made-for-TV routine.

“You have no idea what we can and cannot do,” Plame (Naomi Watts) tells another character in an introductory scene, but the movie never fulfills the implications of that statement. Instead, “Fair Game” hums along with a matter-of-fact portrait of the impact Wilson’s career and subsequent media exposure had on her marriage to United States Foreign Service diplomat Joe Wilson (Sean Penn). Using equal amounts of restraint, Penn and Watts generate competent relationship chemistry, but Liman’s ongoing shots at realism often seem at odds with his actors’ immovable star power. Still, their performances ensure that the stronger bits hold together.

The political components of the events play out in equally low key terms. Liman’s shaky cam approach, which allowed him to blend naturalism with suspense in “The Bourne Identity,” brings a droll touch to the offices of the CIA and the characters’ unremarkable household. The details of Plame’s working life are a different story. As we watch her commandeer discussions of WMDs in Iraq, yellowcake or the lack thereof, and other buzzwords of modern intelligence warfare, the screenplay (by Jez and John Butterworth) borders on didacticism. Whenever a real figure drifts into view – fake Scotter Libby, fake Karl Rove and the voice of Chris Matthews all make cameo appearances – “Fair Game” automatically loses its authenticity to strained efforts of reconstruction.

However, Liman provides a solidly observational peek at the couple’s failed bids to rectify the demands of Plame’s career with those of suburban domesticity. “I’m not feeling very 007-ish,” Wilson sighs at one point. As if redoing the cartoonish spy universe of his “Mr. and Mrs. Smith” in quasi-documentary form, the director revels in the couple’s attempts to maintain themselves around peers engaged in armchair political discussions. But much of that clever verité quality dissipates when the plot shifts focus to the Libby affair behind the White House’s conscious outing of Plame’s identity.

When the secret gets out and their unexpected celebrity status threatens the stability of their marriage, Penn unleashes a screaming fit that tests the boundaries of Liman’s anti-melodramatic streak. Understatement gives “Fair Game” its main appeal, and also makes its awkward ventures into ideology (particularly with a closing speech about citizen responsibility) look particularly contrived. As a slice of mismanagement in the era of the Bush Administration, the movie mercifully avoids both the bizarre histrionic embellishments of Oliver Stone’s “W.” and the distracting morbidity of Rod Lurie’s “Nothing But the Truth,” which depicts the experiences of jailed New York Times journalist Judith Miller in reporting on Plame’s job.

To his credit, Liman takes the facts upfront and allows the events to unfold with eventuality rather than unbelievable tragedy. “Fair Game” builds to an admirably intelligent perspective in its middle section, when Wilson embarks on a frenzy of media appearances and increasingly endangers his family’s comfort, but the overall impact only amounts to a few insignificant lines of conclusive dialogue. Unlike the national media circa 2003, Liman undersells his intrinsically sensationalistic hook.