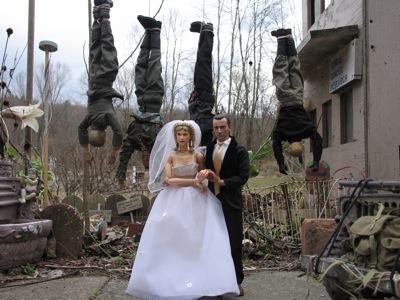 The Cinema Guild has announced the acquisition of U.S. distribution rights to Jeff Malmberg’s “Marwencol,” which won the Grand Jury Award for Best Documentary Feature at the 2010 South by Southwest Film Festival. Andrew Herwitz, President of the Film Sales Company, negotiated the deal on behalf of the filmmakers with Ryan Krivoshey of the Cinema Guild. “Marwencol” will open in theaters this fall.

The film follows fantasy world of Mark Hogancamp. In indieWIRE‘s SXSW review, Eric Kohn describes the film: “Hogancamp, an upstate New York resident left with brain damage after several men attacked him outside of a bar in 2000, copes by creating his own world. An amnesiac and alcoholic in his previous life, Hogancamp emerges from the attack in a confused but essentially reflective state: Lacking the finances to unravel his trauma through therapy, he plays with dolls instead.”

“‘Marwencol’ is like nothing you’ve ever seen,” commented Ryan Krivoshey in a statement. “It not only captures the awakening of a bona fide artist, it brings to life a fictional universe with enough action, intrigue and romance to rival anything coming out of Hollywood this summer. We are very excited to be working with Jeff and his team on the release of his amazing film.”

Director Jeff Malmberg said in a statement: “Cinema Guild is a great home for ‘Marwencol.’ They have a long history of distributing interesting, high-quality films. We look forward to collaborating with Ryan and his team on the release of our documentary.”

This Article is related to: News and tagged Acquisitions, Documentary, Marwencol