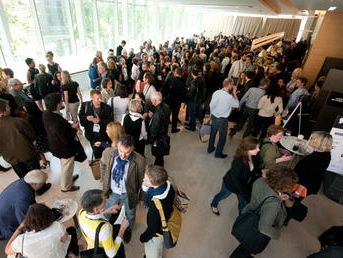 Hundreds of broadcasters, funders, filmmakers, and other observers convened this Wednesday and Thursday morning for the Toronto Documentary Forum, North America’s largest documentary market, as part of the ongoing Hot Docs film festival. Led for the second year by Elizabeth Radshaw, the TDF selects twenty promising new projects for filmmakers to pitch for potential co-production support, providing invaluable access to the movers and shakers of the non-fiction world and allowing them to make an early impression that may pay off with a broadcast deal or at least open a door to acquisition meetings down the line.

Despite facing reduced commissioning and acquisition budgets and programming slots in the ongoing recession, producing teams soldiered on to deliver their best attempts to garner attention and potential financial support for their projects in 15 min pitches to the assembled crowd in the TDF’s new center at the Royal Conservatory of Music. Well-regarded Pitch Moderators, including Axel Arno (Sveriges Television/STV), Karolina Lidin (Nordic Film & TV Fund, Sheffield Doc/Fest MeetMarket), and Andrea Meditch (Executive Producer, “Man on Wire,” “Encounters at the End of the World”), kept the proceedings moving briskly, prompting the participation of a United Nations-like assemblage of broadcasting representatives from around the world to weigh in on their relative interest in the various projects.

Thirty projects had the opportunity to pitch (28 pre-selected, and two wild cards randomly drawn from a Royal Canadian Mounted Police’s hat from entries submitted by observers). Of the roughly one-third I observed, a number were note-worthy:

Easily the best pitch observed during Wednesday’s session, “Herman” impressed industry with its plan to creatively and humanistically wed a personal story of artistic collaboration with a serious consideration of the failings of the prison system.

Well-respected documentary producer Wintonick gave the most memorable opening to a pitch at the TDF by cleverly adopting the bravado and jargon of a boxing announcer to introduce his team before director Chang (“Up the Yangtze”) took over. Aiming to follow their subjects over a year of training and competing, “Heavyweight” won over broadcasters and funders who confessed they were not even supportive of the sport.

The discovery of the never-before-seen amateur narrative film by the project’s half Egyptian/half American protagonist serves as a springboard to examine a lost part of Arab history and identity and its intersection with the rapid growth in the importance of oil in the geopolitical landscape. The film succeeded in capturing the imagination of more than one broadcaster, and many are eager to see more.

While the filmmakers’ pitch drew varied responses and opinions from the assembled, the core of the story, recounting the remarkable story of a man who survived the atomic bombing of Hiroshima and sought refuge in Nagasaki, only to live through the bombing their a few days later, remains compelling. While Yamaguchi, late in life, became an anti-nuclear weapons advocate, the revelation that survivors of the atomic attacks kept silent for most of their lives due to societal stigma especially piqued the curiosity of many of the delegates.

“The Wanted 18”
Director: Amer Shomali
Producers: Saed Adoni, Ina Fichman, Dominique Barnaud
Country: Canada
Production Company: Intuitive Pictures
Proposed Delivery: 9/30/2011
Financing Sought: $690,000 of $972, 730 USD
Synopsis: The (partially animated) story of the most powerful army in the Middle East chasing 18 cows. In the early years of the first Intifada, a group of Palestinian activists started their own dairy farm with 18 cows. Deemed a threat to Israeli security, the activists and their cattle were forced to go undercover…

While different broadcasters expressed contradictory concerns that the project was perhaps both too light and not funny enough, there seems to be documentary gold in the absurdity of this story, well-known to Palestinians as a pivotal episode that solidified their sense of dignity and pride, but virtually unknown to outsiders. The trailer featured examples of the humorous animated cows in hiding, a device employed due to the lack of archival footage from the time period.

Although the overall arc of the project wasn’t entirely clear, the premise is intriguing – Rezwan adapts to the loss of Bangladesh’s surface area due to rising water by designing initiatives to transfer schools, training centers, and more onto boats, providing opportunities for the displaced people. The question remains as to what kind of support he hopes to receive from the first world – a scene in the trailer suggests he has an uphill battle to gain attention and funding to implement his ideas effectively.

Award-winning documentarian Jonathan Stack (“The Farm: Life Inside Angola Prison”) confidently pitched his new project, following Nigerian company SW Global, as they successfully bid (as the only African company) for important jobs that should revolutionize their country’s ability to participate in the global marketplace and subsequently improve their citizen’s economic position. But against endemic corruption and a lack of infrastructure, SW Global has the potential to fail. Some broadcasters questioned this open-endedness, but the potential for positive change by Africans for Africans drew overwhelmingly positive responses for the project.

For more information on these and other projects, please visit the Toronto Documentary Forum’s website.

ABOUT THE WRITER: Basil Tsiokos is a Programming Associate, Documentary Features for Sundance, consults with documentary filmmakers and festivals, guest curates the Out at the Movies film series at the Jacob Burns Film Center, and recently co-produced Cameron Yates’ feature documentary “The Canal Street Madam.” Follow him on Twitter: @1basil1

This Article is related to: Festivals and tagged Documentary, Features, Festival Dispatch