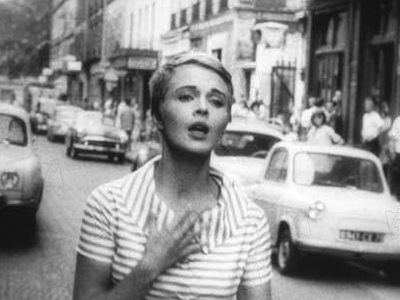 Jean-Luc Godard’s “Breathless” woke me up to the vitality of film language — and, by extension, the medium’s potential as an art form. I first encountered this existential slice of genre deconstruction on VHS, a format generally unkind to preserving dated moving image experiences, but perfectly aligned with Godard’s intentionally uneasy formalism. The tracking problems virtually enhanced its self-reflexive allure.

I have seen it many times since then and continue to work on comprehending all of it. “Breathless” is about crime the same way that “Citizen Kane” is about a sled, by which I mean it doggedly avoids such a basic reduction. As the Godard movie returns to theaters this week in commemoration of the 50th anniversary, one thing remains certain: The radicalism of both “Breathless” and its maker haven’t changed. When the 79-year-old director recently premiered “Film Socialism” at Cannes (and mysteriously ditched out on the festival at the last minute), critical reactions were all across the map: Angry, frustrated, fascinated. “Breathless” did that upon its release in 1960, and still does it to this day.

The story of cop-killing hoodlum Michel (Jean-Paul Belmondo, on the brink of global stardom) and his hesitant lover Patricia (Jean Seberg, whose star had begun to fade) routinely avoids being about what it’s about. If “Breathless” truly revolved around a doomed criminal on the lam, Godard wouldn’t stop the action for an aimless segment in Patricia’s apartment, where the couple babble on about music and literature before engaging in lazy afternoon sex. The characters, or rather the illusion of characters, regularly steal the spotlight.

The same can be said for Godard’s loose homage to gangster movies and his reliance on the purposefully unsettling editing device known as the jump cut. “Breathless” offers a lesson in the principles of cinematic meaning by systematically confronting them. That Godard chose to use the jump cut as a quick strategy for whittling his two-and-a-half hour version down to ninety minutes almost seems irrelevant. Godard’s cheap shortcut underscores his devotion to realizing his ideas in steadfast resistance to failure. Out of that resistance emerged a new kind of style: stream-of-consciousness filmmaking of the highest order.

Godard’s historically stressful 1959 production of “Breathless” coincided with the shooting of John Cassavetes’s own famous directorial debut, “Shadows,” on the other side of the Atlantic. Appropriately, both movies commit to non-commercial processes. That the spirit of invention arrived with similar aesthetic techniques (handheld camera, improvisation, etc.) in two places at once speaks to the manner in which they opened the floodgates to unvarnished personal expression. As a result, both men informed the work of independent filmmakers in later generations. In Godard’s case, these range from Gregg Araki and Quentin Tarantino to Wes Anderson.

But we don’t need “Breathless” to understand these movies; we need “Breathless” to understand movies, period. Every jagged, disorienting scene is offset by pure visual inspiration. Godard’s uncontrolled excitement over the possibilities of the camera’s unblinking eye lead to a series of ruptures. In one of my favorite moments, Raoul Coutard’s camera zooms in on Belmondo’s face through a rolled up poster, an ode to the iris that anticipated the ritualistic opening of James Bond movies.

Individual shots either blatantly or subtly reference other movie personalities, from Humphrey Bogart to Jean-Pierre Melville, whose memorable cameo as a famous novelist allows him to deliver the movie’s best line. Asked by Seberg’s journalist character about his ultimate wish, he cooly responds, “To become immortal, and then die.”

So far, it appears that Godard has pulled off that feat for himself. His career continues to stagger through several unpredictable stages, each of which further solidifies the possibility that his reputation will eternally perplex newcomers to his work. The struggle is part of the fun.

Why do we need “Breathless” in an age when anyone with a decent internet connection can upload their uncensored cinematic vision? Because Godard broke those barriers better than anyone else at the time. Those willing to easily dismiss that factor should consider wrestling with “Breathless” a little while longer. The greatest threat to Godard’s legacy is not obliviousness but disinterest.