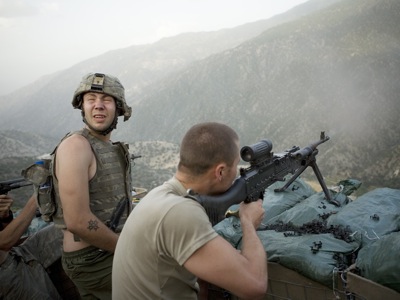 Sebastian Junger and Tim Hetherington’s Sundance Grand Jury Prize winning doc “Restrepo” led the weekend’s specialty box office, according to estimates provided by Rentrak earlier this afternoon. The film, which examines the men of the Second Platoon in Afghanistan’s Korengal Valley, grossed an impressive $30,453 on 2 screens, averaging $15,227. That made for the highest per-theater-average for any opening film (including Hollywood’s “The Grown-Ups” and “Knight and Day”), and the second highest per-theater-average of any film in North America.

The film that beat “Restrepo” was the film that last weekend nearly set the year’s record for best limited debut, “Cyrus.” The Fox Searchlight release – a significant expansion into the mainstream for brothers Mark and Jay Duplass, whose previously work included ultra low budget films “The Puffy Chair” and “Baghead” – expanded from 4 to 17 screens and managed a quite impressive gross of $300,000, averaging $17,647 to take its cume to $565,032 after 10 days of a very limited release. Searchlight’s goal is to have the film at 300 to 400 theaters by its fifth week. Though they are prepared to go wider than that if the momentum and audience response dictates it.

Besides “Restrepo,” the weekend’s other openers include Sony Pictures Classics’ release of Alain Resnais’s 2009 Cannes Film Festival entry “Wild Grass.” The film, which divided critics at Cannes (though those who loved it really loved it), grossed a decent $20,132 from two screens in the U.S., and then another $15,600 from three screens in Canada. Overall, its North American box office was $35,732, averaging $7,146 from its five screens.

Yorgos Lanthimos’s “Dogtooth” – the best reviewed of the openers – unfortunately was the least successful, grossing only $7,500 from two screens. Its $3,750 average was the lowest of the three major openers. Like “Grass,” “Dogtooth” premiered at the 2009 Cannes Film Festival, where it won the top prize in the Un Certain Regard competition. Critics seemed to agree with the Un Certain Regard jury, giving it one of the five best scores in criticWIRE history.

The news was much more promising for other holdovers. Besides “Cyrus,” Luca Guadagnino’s critical darling “I Am Love,” held on very well in its sophomore frame. Going from 8 to 27 screens, the film, which richly details the refined world of a wealthy Italian family (led by Tilda Swinton, who learned to speak Italian for the role), grossed $245,000, averaging a potent $9,074. Notable was that the film’s NYC grosses (at the Sunshine, Lincoln Plaza, and Cinemas 123) all actually went up from last weekend, taking in a $45,023 total after Fri/Sat last week to 46,682 this week for Friday and Saturday. The film will expand to 75 screens on July 2nd.

In its third weekend, Debra Granik’s Sundance prize winner “Winter’s Bone,” also had much to celebrate this weekend. The film, which follows a young woman living in the Ozark Mountains played by Jennifer Lawrence, crossed the $1 million mark, going from 38 to 70 screens and managing a respectable $446,000 gross, averaging $6,371 and taking its total to $1,072,993. Distributor Roadside Attractions should be quite happy with the numbers especially considering the film had recently expanded to a number of markets near where the film takes place, including St. Louis, Louisville, Kansas City, Springfield, MO and Fayetteville, AR, that wouldn’t generally be part of a limited release’s expansion process.

IFC Films had two films expanding – Ricki Stern and Annie Sundberg’s doc “Joan Rivers: A Piece of Work” and Michael Winterbottom’s “The Killer Inside Me.”

“Rivers” went from 29 to 86 screens in quite the aggressive expansion, and managed a promising gross of $365,500. The film, which chronicles the private dramas of iconic comedian Joan Rivers, averaged $4,250 and took its total to $716,500, suggesting quite strongly that it is sure to hit the rare-for-a-documentary-these-days $1 million mark in the next week. IFC Films plans to expand the doc to 50 markets by July 4th weekend.

“Killer” went from 1 to 4 screens this weekend. The controversially violent film starring Casey Affleck, Jessica Alba and Kate Hudson, revolves around a small town Texas sheriff and a series of murders. The film grossed a $24,400, averaging $6,100 and taking its cume to $42,622.

The sixth weekend of Brian Koppelman and David Levien’s “Solitary Man,” went from 107 to 177 screens and grossed a fantastic $478,000. That gave the film, starring Michael Douglas, Susan Sarandon, Danny DeVito, Mary-Louise Parker and Jesse Eisenberg, a great $2,701 average and brought it past the $2 million mark with a new total of $2,072,000. That made it distributor Anchor Bay’s second two million dollar grosser ever (its first, “City Island,” hit $6,150,000 this weekend).

“Man” was one of four specialty films (the others being “Winter’s Bone,” “Joan Rivers” and “Cyrus”) to make the overall box office top 20, despite each playing on fractions of the screens of the studio films to do so. Narrowly missing that cut was Sony Classics’ nine-week-old “Please Give.” Nicole Holofcener’s film – which stars Catherine Keener, Oliver Platt, Amanda Peet and Rebecca Hall – grossed $292,000 from 219 screens, enough to have it cross the $3 million mark, which is a substantial milestone for specialty films these days.

Check back with indieWIRE later this week for a mid-year report on the indie box office.