“I was two years into an engineering degree at Iowa State University and was really dissatisfied,” Schneider said this week at the Four Seasons Hotel in New York, while in town to promote his first feature film, “Get Low.” “My family and I took off for a vacation to Florida and Billy Crystal just happened to be there. My mom knew I was into special effects at the time, so my mom said ‘why don’t you just go ask Billy how to get into special effects?’”

Schneider did, and got the response he needed to jump-start his new career. Crystal told him to go to film school.

“His instinct was that I didn’t know anything about the film business and that I might find something where my talents lie by going to school,” Schneider said. “So sure enough I applied to three, got into the University of Southern California, and left my friends and family behind in the Midwest.”

This was back in the late ‘80s. Since first meeting the City Slicker, Schneider has worked tirelessly as a cinematographer on such films as “Kiss the Girls” and “Simon Birch.” He also served as the second unit director of photography in 1997 for James Cameron’s little film that could, “Titanic.”

Though Schneider fell into cinematography following his time at USC, directing was always on the horizon.

“I’d always loved all the different aspects of filmmaking,” he said. “Somewhere around ‘97 it kind of surged up in me. It wasn’t a long-term plan thing, I just suddenly realized we’re all storytellers, it’s just my toolbox was a camera, light and lens at the time. A director’s toolbox is everything. I thought it’d be kind of fun to tell a story with all the tools. So I put my entire life savings into a short film that I wrote.”

That short, “Two Soldiers,” garnered Schneider the Academy Award for Best Live Action Short Film in 2004. With his name now anointed with ‘Academy Award Winner’ Schneider set out on directing his first feature film. Happily, he didn’t have to look far – one landed in his lap. 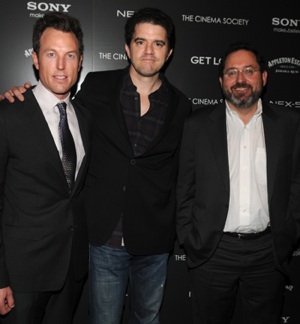 Producer Dean Zanuck (“Road to Perdition”) had seen Schneider’s short, and thought he was the perfect fit to direct “Get Low,” a Tennessee set story of an elderly hermit who enlists the help of a funeral director to throw a party for his own impending funeral. Zanuck had already been in talks with Robert Duvall who wished to star, so Schneider obviously jumped at the opportunity to direct the acting legend. Once on board, Schneider had no trouble wrangling together Sissy Spacek and Bill Murray to round out the cast, due to Duvall’s commitment.

No doubt bolstered by the solid cast, Schneider’s first feature premiered in Toronto, and has since gone on to play at Sundance, South by Southwest and Tribeca. All the festival hop skipping culminated this week at a star-studded event hosted by the Cinema Society in New York to celebrate the film’s opening next Friday. Spacek, Duvall and Schneider were in attendance for the soirée, which attracted a crop of New York’s finest that included Doug Liman, John Cameron Mitchell, Calvin Klein, Lucy Punch and photographer Nigel Barker.

For now, Schneider is still in the midst of promoting “Get Low”’s impending release. Asked if he foresees a career as a cinematographer or director, Schneider offered: “I do think directing is my future. I enjoy it so much, and it’s not like you have to let go of shooting. You’re still working side by side with a cinematographer. Having come up as a cinematographer I’m looking forward to working with some of the cinematographers I’ve always looked up to, and learning from them. Hopefully it’s a long journey with a lot more learning.”

This Article is related to: Features and tagged Futures, Get Low