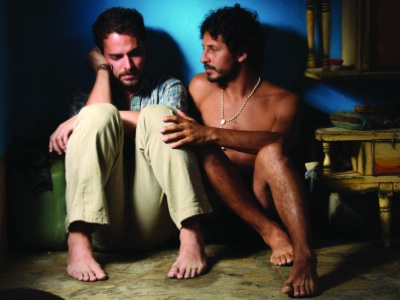 Opening night for LA’s LGBT Film Festival, Outfest is tonight, and to get ready, we’ve been profiling the four first-time filmmakers the festival is putting the spotlight on for their 4 in Focus program.

The past three days, we’ve profiled the following three filmmakers and films:

“I wanted to explore oppression, forgiveness, and sexual awakenings in differences ages and states of being. Whether the awakening is ‘right’ or ‘wrong,’ it often happens exactly the same way.”

“When I was 17 or so, I became active in the homocore scene in the Midwest. It was a place where punk and queer culture overlapped. A lot of people who didn’t fit in anywhere else found a home there. Through this I met a lot of transmen, and I began to wonder what it would be like to have a child with a transman.”

“When I was 12, I had a French teacher I liked a lot. I admired her and she was a good role model. I wanted to be her favourite pupil. Throughout this story, I want to deal with the question of the construction of femininity at this peculiar age, between childhood and adulthood, which had not been shown much in cinema.”

Editor’s Note: Earlier this summer, we profiled Outfest’s fourth 4 in Focus filmmaker, Javier Fuentes-León in our FUTURES column. The following was published in that earlier FUTURES profile.

“The seed for the story came accidentally while I was studying,” director Javier Fuentes-León told indieWIRE of his 2010 Sundance award-winning film, “Contracorriente” (Undertow). The unusual story, which opened the recent NewFest in New York and is one of 4 in focus at this year’s Outfest, takes place in a small conservative seaside village in Peru. On the surface, all appears well for a fisherman and his devoted wife who are expecting their first baby. The hero is a hardworking and respected member of his community, which holds fast to rigid traditions.

There is one wrinkle – he is also devoted to his male lover. A catastrophic accident does not erase the presence of his lover, as the fisherman must now contend with the apparitions of his forbidden love and the gossip and disapproving stares of his neighbors. And it may go without saying – his wife isn’t too pleased either.

“I started working on ‘Undertow’ in 2002 and was invited to a screenwriting lab at Outfest. There I got advice from Don Roos (“The Opposite of Sex”) and John Cooper from Sundance.” From there, the project took on a saga of its own, with Fuentes-León later attending the Talent Campus in Berlin, meeting German co-producers in Cologne. There was also money fundraising in France, a screenwriting workshop in Argentina, and meeting Colombian producers. Finally, he secured financing from Peru where he grew up. “They became my guardian angels really,” Fuentes-León said from Los Angeles. Production began in June 2008 with principal photography taking place in November and December of that year.

The result is an entertaining and unique story. Too often, gay cinema can be one note, but “Undertow” marks a maturation for queer film and Fuentes-León is a fresh cinematic voice.

“It was amazing…,” said Fuentes-León. The reaction was great and we had four screenings – two with standing ovations. And then we won the Audience Award. I hope I don’t sound cliche but it was great.”

Fuentes-León also felt vindicated because some had told him the supernatural aspect in the story would narrow the potential audience for “Undertow.” “People said that it was a fine line. The film is gay and it has a ghost and not too many people would get it. The screenings at Sundance were a great affirmation.”

Now that he has his first feature under his belt, Fuentes-León is looking to carry on with other projects, though he is still traveling to festivals around the world with “Undertow” (the film is currently showing at the Sydneay Film Festival in Australia).

“I have three different projects and they’re all over the place,” Fuentes-León said with laughs. “One is another love story, but it’s between and man and a woman. I also have a psychological thriller set in L.A., and another one is a rock musical.” The one common thread in his ideas, including “Undertow,” is an element of the fantastical present. “There’s a fragile realism [in my stories]. Bringing something that is real, but somehow a bit off is natural. It allows you to talk about issues that in a way is very liberating.”

This Article is related to: Festivals and tagged Features, Interviews, Outfest, Queer Cinema