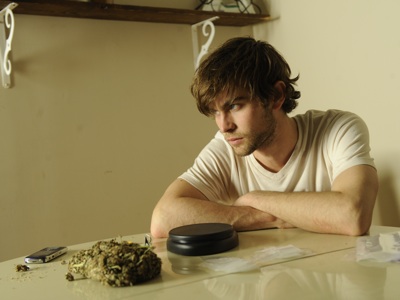 If Joel Schumacher’s critically ravaged “Twelve” is going to one day become a so-bad-it’s-good cult classic, it has now met the box office disaster requirement that typically comes with the territory. According to estimates provided by Rentrak earlier today, the Hannover House release grossed a dismal $107,000 from 231 screens, averaging only $463 per screen. The film follows Chase Crawford as a high school dropout turned successful drug dealer in New York’s Upper East Side. The grosses this weekend do not bode well for the rest of the Schumacher film’s theatrical run (which one would suspect won’t last long).

Paramount’s release of George Gallo’s “Middle Men” (a rare acquisition title for the company) had a similarly wide debut and while the result wasn’t a “Twelve”-like disappointment, it was a disappointment nonetheless. The film – which had its world premiere at the Santa Barbara Film Festival and stars Luke Wilson, James Caan, Giovanni Ribisi and Gabriel Macht – grossed just $305,000 from 252 screens, averaging $1,210.

Faring far better was IFC Films’ release of Ruba Nadda’s Patricia Clarkson romance, “Cairo Time,” which debuted on 5 screens in New York and Los Angeles. The film sold out shows all weekend in New York, grossing $62,250 and averaging $12,450 – the best per-theater-average of any film in release. IFC said it will roll out the film “aggressively” throughout the rest of the summer.

Last weekend’s top debut, Aaron Schneider’s “Get Low,” held on quite nicely in its first round of expansion. The Sony Classics-released film, which follows Felix Bush (Robert Duvall), a hermit who decides he wants to throw himself a “funeral party” before he actually passes, went from 4 to 26 screens and grossed $234,095, a 165% increase over last weekend. That also gave “Low” a strong $9,004 average and a new total of $365,307.

Not quite as strong was the second weekend of The Weinstein Company’s release of Radu Mihaileanu’s French import “The Concert.” The film, which follows a once celebrated Russian conductor who now finds himself a depressed, alcoholic custodian, went from 2 to 19 screens, and managed a $70,000 gross, averaging a so-so $3,684. The film stars Melanie Laurent (of “Inglourious Basterds” fame Stateside), Francois Berleand and Alexei Guskov.

Focus Features made another aggressive push for its summer hit “The Kids Are All Right,” expanding it to 994 theaters in its fifth frame (up 147 from last weekend). The result was a $2,606,238 gross, and for the first ascended into the overall top ten. However, its gross was actually a 26% drop from last weekend, and its $2,622 average unspectacular. Both points suggesting “Kids” has officially peaked. That said, the $4 million budgeted Lisa Cholodenko-directed film has now grossed $14,049,243, and should easily chug past the $20 million mark, making it the highest grossing indie of 2010 so far.

Another summer indie hit, Debra Granik’s Sundance prize winner “Winter’s Bone,” entered its ninth weekend and continued to perform strongly. The film, which follows a young woman living in the Ozark Mountains played by Jennifer Lawrence, expanded ever so slightly from 139 to 141 screens and grossed $290,750 (only a 6% drop). That gave the Roadside Attractions release a $2,062 average and took its total to a stellar $4,473,000.

Finally, “Winter’s Bone”‘s fellow Sundance winner, Sebastian Junger and Tim Hetherington’s doc “Restrepo,” had an impressive seventh weekend. The National Geographic-released film, which examines the men of the Second Platoon in Afghanistan’s Korengal Valley, went from 36 to 49 screens and grossed $110,089. Its $2,247 average – despite 13 new screens – was actually a 5% increase from last weekend. That gave the film a new total of $812,918 and all but assured future entry to the rare $1 million-grossing doc club.