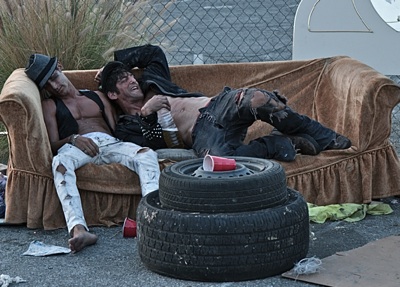 Unless I’m missing something, the miraculous potential of a giant undead penis in Bruce LaBruce’s “L.A. Zombie” is a definite first for film history. Banned from the Melbourne Film Festival and bound to inspire heated debate wherever it plays next, the wordless, hour-long portrait of a walking corpse waking the dead with his regenerative sexual powers will grab more headlines than viewers. A purely experimental exercise in the cinema of the body, the movie overstates LaBruce’s gay-porn-as-art routine in an extreme fashion even by his own standards.

An introductory scene shows the zombie in question (porn star and model Francois Sagat) emerging from the waves, then dives right into the conceptual mayhem: The figure grabs a ride into town, but the car crashes and the driver lies dead on the side of the road. His passenger quickly gets to work, whipping out his zombified manhood and fucking the deceased body’s torn chest cavity until his heart starts beating again. In a bizarre update to contemporary zombie mythology, black semen apparently doubles as miracle juice, and Sagat turns back into a living human post-coitus. Even George Romero may scratch his head at that deviation, but then “L.A. Zombie” isn’t exactly pitched at his target audience.

In 63 minutes, “L.A. Zombie” features five sexual encounters that inspire laughter at first, followed by fatigue. LaBruce has prepared a softcore version for the festival circuit, and promises a hardcore cut available on DVD for those interested in such a thing. Regardless of its explicit nature, the sex (in the softcore version I’ve seen, anyway) hardly approaches the mad provocations of his more ambitious projects. (A skinhead ejaculates on “Mein Kampf” in “Skin Gang,” which makes the chest cavity bit in “L.A. Zombie” look relatively tame.)

In fact, the interstitial moments in which Sagat simply wanders around the city looking purely dazed make the movie — if it can be rightly called that. These extended sequences bear a closer resemblance to installation art than storytelling. Beyond the gay hook, “L.A. Zombie” unquestionably works as a meditation on the urban vapidity of Los Angeles, evocatively captured by cinematographer James Carman in a darkly expressive neonoir palette. Sagat, outfitted in Joe Castro’s bright blue make-up and bloody fangs, represents the social pariah on multiple levels.

A stroll Sagat takes through the cemetery may indicate LaBruce’s intended meditation on mortality, and a repeated crossfade between Sagat’s zombie and non-zombie faces as the character sheds tears of blood deepens his messianic dimensions. If the director positions the zombie as the ultimate Other, he equally suggests that repressed sexual desires create the ultimate monster.

This Article is related to: Festivals and tagged In Theaters, Locarno International Film Festival, Reviews