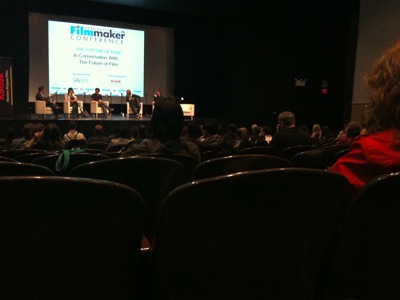 Each year during the week between the Toronto and New York film festivals, indie minded moviemakers are in focus at the IFP annual gathering in Manhattan. Formerly known as the IFP Market (and the Independent Feature Film Market before that), IFP Independent Film Week is a meeting point and showcase for indies and their work-in-progress productions. Attendees alternated between optimism and pessimism yesterday as the event’s film conference, dubbed The Future of Film, kicked off.

“The future is looking quite bright for the first time in quite awhile,” proclaimed Joana Vicente, head of the IFP, opening the proceedings in front of about a hundred folks early Sunday morning. She cited a boost in buying at the recent Toronto International Film Festival and an increase in production as a sign that indie film may be coming out of a slump linked to the recent economic crisis.

Hope and Lipsky warned that independent film today is increasingly aimed at older audiences, namely white women over the age of 45. He wants to counter the shift with his latest film, “Super” (which was just sold to IFC Films at the Toronto fest).

“How do we make sure we are not relegated to the land of dance and chamber orchestras?” asked Hope, “That’s were indie film is heading.”

Inspired in their day by Stanley Kubrick’s “A Clockwork Orange,” Ted Hope and Jeff Lipsky wondered where such movies are today. “How come artists aren’t really addressing the audience?” Hope wondered aloud. Where are the movies that connect sex, drugs, rock-n-roll, anger and rebellion? How come independent film has nothing that represents Public Enemy or The Clash?”

To better reconnect younger audiences with indie films, Lipsky detailed a proposal he said he’s made to the IFP. He wants someone to curate a list of the most significant and best independent films of the past sixty or seventy years and, using prints donated by the distributors, tour them around the country to as many as fifty cities. The screenings should be aimed at junior high school and high school student to help shape their tastes before they get to college. It starts with a sense of history, Lipsky said.

Among Hope’s remedies is to embrace the creativity seen on television today where he said the best independent work can be seen. And, Hope said, another is to foster film criticism among younger writers for a new generation of movie fans. “Name the critic who has the platform who is in their 20s,” he said.

Amidst the talk about the failings of the younger set, earlier in the day the IFP Conference opened with a new generation of filmmakers. Perhaps surprisingly, the group warned about moving to quickly to embrace new technologies and techniques. The discussion was marked by a distinct sense of traditionalism. For all the talk today of filmmakers abandoning celluloid film, only releasing their movies to digital platforms and then marketing them via social media, Sunday’s crop of next indies advocated for a moderate approach that mixes new and traditional methods.

“I don’t think that the whole future is now,” warned Benny Safdie, lobbying for maintaining some traditional methods of shooting and releasing films. He said that filmmakers like himself still want to shoot on film and also covet a traditional theatrical release. And he touted his truly old school promotional techniques. Rather than promote his movie via Facebook or Twitter, Safdie said it was donning a sandwich board on the streets of New York that really did the trick when it was time to advertise his release. “I think I convinced a lot of people,” Safdie said.

Yet, Safdie also advocated that filmmakers avoid being to wedded entirely to old school approaches. “You need to be a little bit flexible,” Safdie advised.

“There’s a changing landscape with how movies get seen,” Safdie explained, “How somebody wants to watch a movie is going to be how they watch a movie.”

Currently in the fourth week of production on a new movie, producer Josh Mond agreed. He spoke out in favor shooting on film when possible and educating audiences to embrace unconventional work, but said that VOD can be a powerful outlet for distributing a film.

Saying that “Afterschool” scored 50,000 buys on demand, Mond proclaimed, “We actually saw money from [distributor] IFC after the fact.” He concluded, “You do whatever the hell you have to do if you believe in the film.”

For producer Mynette Louie, that meant orchestrating a ten city theatrical release of Tze Chun’s “Children of Invention” to drive her ancillary sales. After all, this is still a “nuts and bolts physical business,” she said, saying time and again that her focus was getting “asses in seats” and selling DVDs.

Independent Film Week and the Future of Film Conference continues this week in Manhattan. indieWIRE Eugene Hernandez will moderate a morning Q & A with John Sloss on Wednesday morning at 10 a.m. at the event.