In His Own Words: Director/Writer Nicholas Fackler Discusses "Lovely, Still" 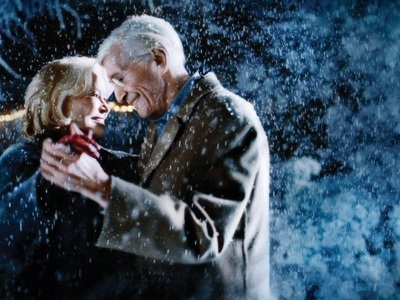 “Lovely, Still” is a unique love story between two people at the end of their lives. It takes place in an imaginary mid-western town a week before Christmas. Robert Malone, an elderly man living by himself, comes home one day to find Mary in his living room. His life suddenly takes a turn he never expected as he experiences love for the first time. But don’t let the synopsis fool you, the film definitely takes a strange turn, which is intended to open up the heart of the story even more.

The stylistic quality of the film jumps from traditional to experimental as the story moves from Robert’s external experience to his internal manifestations of these “new” feelings. I wanted to achieve a film where the character was anchor and the genre/style of the film could move and transform within the context of the story. From “Old Hollywood Christmas film” to “modern comedy”. From classic mystery to something very dark and experimental. It was important for me to find the balance within this concept and most importantly, drive the story with emotion and character.

The scene chosen takes place directly after the first date between Robert (Martin Landau) and Mary (Ellen Burstyn). It is the classic end of date moment. With an audience expectation of a kiss goodnight to seal the deal that we are indeed dealing with a love story between two elderly people.

In fact, the original script I had written many years ago indeed had them kiss. But as I continued work on the story I decided that the innocence of Robert would prevail and that something as simple as Mary taking his hand would hold a greater power. For within the context of the film, it is Mary who continues to enlighten Robert throughout the film. So it makes sense that she be the one who pulls him into the idea of them as a unit. No longer two. But one.

I wanted many moments of “Lovely, Still” to have a sense of magic to them. The phrase “Fairy Tale” was thrown around a lot initially. In moments such as this clip, our magical view of the world took a major importance. Sean Kirby (Director of Photography) and I really tried to paint almost iconic moments. Something from old Christmas Cards or Normal Rockwell paintings. Sean spent hours and hours with his crew setting up the lighting to achieve such a look and ten minutes before we were to shoot this horrible ice storm came roaring through Omaha, NE. All the beautiful lighting Sean had prepared went to waste as a loud thunderstorm of ice/water/sludge came pouring down outside. It was one of many moments of shooting that I thought “damn – we’re f$*ked again.”

Landau, who from the beginning to the end was one hundred percent supportive, approached me as I was calming down in the Robert’s bedroom. The room was filled with all these abstract stained glass windows and Mylar rigs wrapped in Christmas lights. Martin said “You guys just gotta get out there and make sure no light is hitting the rain – Don’t point that light directly into that rain and it will disappear. Now lets shoot the fucker!” Ha! He didn’t say that end part.

I went to tell Sean and he was one step ahead. Our dedicated crew was already outside re-positioning all the lights as to not directly hit the rain. When we we’re finally ready to shoot all the extras had already left. So again, our crew all got dressed in costumes and sat in as our Carolers.

The finished sequence is one of my favorites in the film. I really love how the crazy Christmas-time reality looks almost fake and how the sludge drops looks like beautiful twinkly pieces of snow falling to the ground. It is the turning point for the characters and beautiful introduction to the magic we accomplished practically.

This Article is related to: Features and tagged Video: In Their Own Words