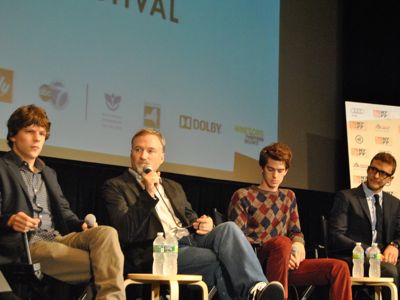 Hundreds upon hundreds of journalists lined up outside the Walter Reade Theater in New York early Friday morning for the very first official screening of David Fincher’s “The Social Network.” Opening the New York Film Festival, the film – which details the very dramatic origins of Facebook – has already won raves and significant Oscar buzz through numerous private screenings over the past few weeks. But this screening marked the first time its filmmaker, screenwriter and cast came along to share their thoughts on “The Social Network.”

Fincher, writer Aaron Sorkin and principal cast members Jesse Eisenberg, Andrew Garfield and Justin Timberlake were joined on stage with NYFF programmer (and indieWIRE blogger) Todd McCarthy after the film for an hour’s worth of quotes on everything from the film’s themes, to whether it’s a biopic, to their own relationships with Facebook. indieWIRE was on the scene, and offers this selection:

Aaron Sorkin on his general disdain for the internet, how he overcame it to make this film, and the universe themes of “The Social Network”:
“My feelings about the internet are actually irrelevant to anyone’s enjoyment of the movie. But what made me overcome it was that I didn’t think it was a movie about Facebook. I thought it was a movie that has themes as old as storytelling itself… Themes of friendship and loyalty, and of class and jealously and power. These things that Shakespeare would write about it, or Paddy Chayefsky would write about. But luckily for me, none of those people were available so I got to write about it.”

David Fincher on what drew him to the project:
“I think people thought we were making the sequel to “The Net,” or that we were trying to do some sort of fad hawking. But, you know, I really didn’t know anything about the origins of Facebook. I just had a dry read of a script that had a bunch of people in it I felt I knew, and knew intimately. I could relate to them, and I could empathize with them.”

Jesse Eisenberg on playing Mark Zuckerberg:
“I did a lot of research during rehearsals… But if I didn’t, and only had Aaron’s script, it would have been perfectly sufficient. As Aaron said, it really was not a movie about Facebook as much as it was about these more substantive themes, and in the same way it was not this traditional biography where I’m trying to do an imitation of Mark Zuckerberg. And so I was really just focused on playing Aaron’s characterization of Mark Zuckerberg.”

David Fincher on whether he considers “The Social Network” a biopic:
“A biopic is there essentially to tell you why somebody did what they did. And I wasn’t interested in that at all. I was interested in what they did… I wanted to stay away from mimicry. We cast the actors that we cast because of what they brought to it, and we wanted to unleash with as much freedom to make each of the parts of the movie be as human as possible. I didn’t want to trap them.”

Justin Timberlake when an audience member asked what it was like “playing an asshole”:
“It became clear to me after my first reading of the script that there was going to be a version of this person – my character, Sean Parker – and he wasn’t the hero, so to speak. But the beauty of this film, to me, is that you really get to pick who you side with. I had a friend who recently screened the film and said to me – and I thought it was really telling – that ‘I don’t agree with anyone in this movie, but I don’t disagree with anyone in this movie.’ He was speaking about all the characters, and I think that’s what makes the dynamic of these three characters tick. I feel like you have to defend your character. No one believes what they’re doing is wrong.”

Aaron Sorkin on suggestions that the story was embellished:
“There is less sex in this movie than there is in any two minutes of ‘Gossip Girl.’ Nothing in the movie was invented for the sake of Hollywoodizing it or sensationalizing it.”

David Fincher on casting “Social Network”‘s Rooney Mara as Lisbeth in the upcoming “Dragon Tattoo” movie:
“Pretty much all the things that we loved about her for Erica are the kinds of things we loved about her for Lisbeth. She’s a really capable, smart, hardworking actress. And she came in and auditioned for ‘Dragon Tattoo,’ and we were like, ‘Yeah, she’s still great.’ And I also felt I needed someone where people didn’t have a preconceived notion of who they were or how they would behave. She’s a mystery onto which the audience can project.”

Aaron Sorkin, David Fincher, Jesse Eisenberg, Andrew Garfield and Justin Timberlake on whether they use Facebook:
Sorkin: “I put up a Facebook page the day I signed up for the movie. I didn’t have one before, and honestly, I didn’t know much about Facebook. I’d heard of it, the way I’d heard of a carburetor. I can’t pop the hood of my car and point to it and tell you what it does. So the first thing I did was start a Facebook account. I kept it up through research and writing and during photography… and then took it down.”

Eisenberg: “I signed up for Facebook the first day of rehearsal, so I could understand what my character was talking about. But when we started shooting, and I had to learn all those lines, I stopped using it.”

Fincher: “I’ve seen it, over someone’s shoulder. But no, I don’t have Facebook.”

Garfield: “I was the usual kind of Facebook user, I’m sad to admit. But I’ve been three months clean. And I’m proud of myself… It was negative for me, like it is for most people.”

Timberlake: “I don’t have a personal Facebook page. It’s hard enough to do voicework on animated films at the same time as this. It’s the double duty of it all… I just don’t have time to look at pictures of my friends.”

Check out video from the entire press conference here.

This Article is related to: Festivals and tagged Features, The Social Network