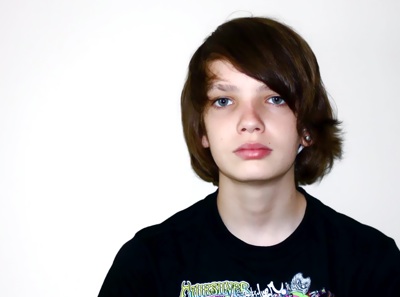 This past September marked Kodi Smit-McPhee’s second visit to the Toronto International Film Festival (TIFF) as an actor with a film to promote. He’s fourteen. Last year saw the young soft spoken Australian trek out to Canada with family in tow to be present for the North American premiere of John Hillcoat’s bleak and beautiful “The Road,” in which he starred alongside Viggo Mortensen. He attended last month’s edition of the festival in support of his lead performance in Matt Reeves’ vampire chiller “Let Me In,” a remake of the Swedish horror “Let the Right One In.”

“The last time I came here I think I only stayed here for two days, so I didn’t get to do a lot of stuff,” McPhee told indieWIRE while in Toronto, two weeks ago. “I have more time now, so it’s more relaxed this time. I’m enjoying it.”

The acclaim bestowed upon his latest film by the majority of the critics at TIFF, no doubt bolstered the ‘enjoyment’ of his time up North. When news first hit that Reeves, the director of “Cloverfield,” was chosen to adapt the beloved Swedish film – released two years ago – for Hollywood, fans were aghast. Margaret Lyons over at Entertainment Weekly summed up their fury when production started on the remake, stating “I’m still not convinced the movie needs an American remake – especially one renamed ‘Let Me In,’ which is not the same – but Richard Jenkins’ presence (as the Håkan character) gives me a sliver of hope. A tiny, tiny sliver.”

Turns out the involvement of the film’s two stars (McPhee and “Kick-Ass”‘s Chloe Grace Moretz) should have signaled that this redo was going to be something special. McPhee turns in a mature and deeply felt performance as Owen, a bullied boy without a stable home, who befriends an alluring young girl, Abby (Moretz), who shares an apartment next to his, in snowy New Mexico. Anyone who’s seen the original, knows that Abby has a secret, one which affects Owen in unforeseen ways.

“I could see what people get defensive about making a new one, especially from Hollywood,” said McPhee, when asked about the initial backlash. “But I’m a fan of the movie, and we’re all fans of the movie, so maybe if they [the fans] realize we’re a part of them, and we’re doing it because we loved the movie, not because we thought it was bad, maybe they’ll realize and have an interest to see it.”

For McPhee, acting is in his blood. Born in Adelaide, Australia, he moved to Melbourne at the age of three because of a gig his Dad, an actor, landed. His older sister was the first to follow in their father’s footsteps – McPhee was next in line.

“I just kind of grew up with it, and it was always just around me, so it was normal to me,” McPhee said. “My dad just asked me if I wanted to do short films and stuff just for fun, and I did some stuff – little things just because I could. It got bigger and bigger, and I got my first feature film, and then that was it. I thought okay I want to be an actor.”

A scene from Matt Reeves’ “Let Me In.” [Photo courtesy of Overture Films]

It was his award-winning turn opposite fellow Aussie Eric Bana in “Romulus, My Father,” that really launched McPhee’s career back in his home country and made him a national star. The team behind the film adaptation of Cormac McCarthy’s spare and brutal “The Road,” invited McPhee on board after coming across an audition tape that McPhee’s father sent from Australia. McPhee was quick to point out that he owes much of his success to his father, who serves as his acting coach both before an audition, and once on set.

“I don’t go to acting schools, because my Dad teaches me everything,” he said. “My performances come from all the work I do with my Dad. The stuff that my Dad gets me to do is just grueling. It’s like school. I have to write about my character, read all these things that I hate. I want people to realize that I just don’t go on set and nail it. It’s all the work I do beforehand.”

McPhee’s hard work seems to be paying off. He’s currently in the process of providing voice work for an upcoming stop-motion animation film, “Paranorman,” produced by “Coraline” director Henry Selick. McPhee is lending his voice to the lead character, Norman, a kid who can see ghosts and saves the world from a zombie invasion. It’s slated for a 2012 release.

As for what lies ahead, McPhee said the path is wide open and full of possibilities.

This Article is related to: Features and tagged Futures, Interviews, Let Me In