There's Something About Mary: Lesley Manville On The Performance of the "Year"

British actress Lesley Manville has been having quite the year. She’s been receiving a enormous acclaim on the festival circuit for her performance in “Another Year,” her latest and arguably greatest collaboration with director Mike Leigh. During a recent stop at the New York Film Festival, Manville discussed her performance in the film, and the man that’s been behind a sizeable portion of her career.

“It feels like I’ve been working with him every minute of my life,” Manville said warmly of Leigh. “But there are actually big gaps. It’s just that we both go back such a long way. And it’s just been an extraordinary canon of work with him. He never gets you to play the same character twice. And that’s my buzz… That’s what I love. And he’s afforded me that enormous luxury.”

Manville recalled the history of that luxury, dating back to 1979, when they attempted to collaborate on a theater project that didn’t end up coming into fruition.

“We started working together on that project but it was aborted, so that was that,” Manville said. “But, we’d met, and it really changed things for me. I was in my early twenties and I didn’t really know what I was doing. I was without direction. I mean, I had a nice career… I had done all sorts of stuff. But I didn’t really think about what [kind of] actress I wanted to be. And I certainly never played anybody that wasn’t me. I had no notion of how to do that.”

Over thirty years later, Manville is definitely no longer playing herself. This is easily evident in witnessing the truly “extraordinary canon” of work the two have done together. From the 1980 BBC film, “Grown-Ups,” where she played a woman dealing with the strain of her relationships with some eccentric relatives and neighbors, to 1998’s “Topsy-Turvy,” where she played the quirky wife of late 1880s playwright W.S. Gilbert, to 2002’s “All Or Nothing,” where she depicts a contemporary checkout clerk living in a South London public housing estate, Leigh has afforded Manville quite a lot of range. But it’s their latest collaboration where that has never been so clear.

With “Another Year,” Leigh gives Manville the gift of “Mary.” Middle-aged, lonely, and never without a wine glass in hand, Mary could have become a caricature in another actor’s hands. Instead, Manville makes Mary one of the most complex and poignant characters to ever come out of a Leigh film (and that’s certainly saying something). With every gesture and every glance, Manville embodies Mary in such a way that critics have been heralding it as one of the year’s greatest performances since “Year” debuted at Cannes in May. But they’ve also perhaps found it a bit of a challenge to describe the root of what it is about Mary and “Another Year” that’s just so compelling.

“The feedback so far seems that people are finding it a deeply moving film,” Manville said, “and that it is also quite a hard film to say what it’s about. Because it’s about life, and it’s about a whole lot of other things… love, loneliness, need, fragility, youth, aging, how random life can be… I think Mary is kind of the sum of all her parts. But she’s the sum of all her parts because life’s dealt her such a bad deal. And it just seems quite random, really. Because she’s a nice person. She’s tender and willing to give so much. But by the time you see her in the film, she’s a pretty battered and bruised woman and that history has led her to behave in ways that are at times not appropriate. And she can’t be completely happy in her own skin. If only she could just relax and stop wearing all those youthful clothes and pink eyeshadow. If only she could just be the age she is instead of fighting against it.” 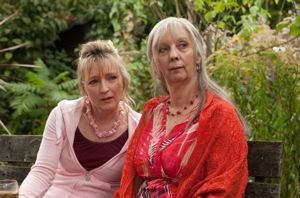 Lesley Manville with Ruth Sheen in a scene from “Another Year.”

Mary was the product of a typical Mike Leigh cinematic process. Known for coming into projects with rather vague ideas about what the film will eventually be, Leigh extensively workshops characters with his actors, giving them unique input into their development.

“It is a bit elusive, really,” Manville said of the process of working with Leigh, “and I think it should stay that way. Because it’s really hard to explain it fully. We’d need a whole week, really. It’s not a process you can do in a day. It’s not like ‘we’ll make her this, this, this and this… let’s put that all together.’ It’s happening very slowly. This kind of cocktail of a person is being born over a very extended period of time. It all merges together in a quite delicate way.”

Manville did offer a few more detailed musings on that merger, which begins with Leigh asking his actors one simple question.

And Manville has always said ‘yes.’

“I can’t see me ever saying no,” she said. “Because the work is so fulfilling. It’s so collaborative. And so much is asked of you as an actor.”

Obviously up to the task once again, Manville is now being rewarded with significant Oscar buzz, which could potentially result in new possibilities for work Stateside.

“I’m deliberately taking some time off so I can go on this journey that Sony Pictures Classics is sending me on to campaign for the film,” she said. “And that’s not unpleasant. It kind of feels like a long term investment for me. It’s the first time I’ve really had the opportunity to do it quite so fully. But I will eventually have to go back to work because I do need to pay my mortgage, [though] I’m hoping to open a new era of work. I have a great career in England – I do lots of theater and make films with Mike and do very nice television work. But it would be nice if this film afforded me the opportunity to come and work with some of the great filmmakers in America and have a bit of an American adventure…”

America would only be so lucky.

“Another Year” is currently playing at the BFI London Film Festival. It opens in select North American theatres December 29th. Check out more from this interview here.

This Article is related to: Awards and tagged Academy Awards, Another Year, Features, Interviews