For Your Consideration: A Mid-November Stab at Oscar Predictions 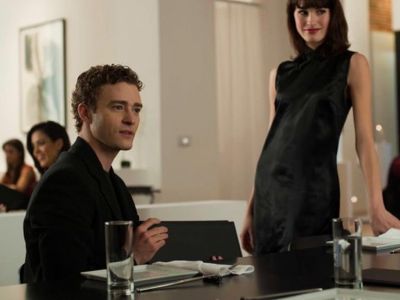 It has been six weeks since this column last took a look at what might be materializing in this year’s Oscar race, and let’s be honest – not a whole lot has changed. At that point, a sextet of films that had screened to Oscar worthy acclaim in the first half of the year – “Inception,” “The Kids Are All Right,” “Toy Story 3,” “Winter’s Bone,” “Another Year” and “Blue Valentine” – all seemed like reasonable bets to stick it out. Venice, Telluride and Toronto had just shown the vast majority of potential contenders, with “The King’s Speech,” “127 Hours” and “Rabbit Hole” leading the way. And “The Social Network” – about to debut at the New York Film Festival – already had an Oscar-buzz-o-meter that was pushing 11.

To varying degrees, all of those things remain in tact. However, that might not be the case for very long. A whole lot is about to change, with the Golden Globe nominations and a flurry of critics awards set to bombard awards season with daily doses of buzz shifts in just a few weeks.

So it seems like now is a good time to reassess where things stand before things start accelerating. Because while not a whole lot has changed, there have been little things here and there. Tom Hooper’s “The King’s Speech” and David Fincher’s “The Social Network” remain best picture’s most-likely-to-succeeds, but there is a certain something in the air that suggests that it’s not necessarily going to boil down to a duel between them (as classic as the old school vs. new school, Weinstein vs. Rudin battle it would be). Then again, there’s nothing that feels like a reasonable bet to beat them either. “Toy Story 3,” “Inception,” “The Kids Are All Right,” and “127 Hours” all seem settled into berths in Oscar’s top ten, though can anyone really picture any of them winning? And then there’s as-yet-unseens like “The Fighter” and “True Grit,” which seem promising but beg respective questions: Is another boxing movie, especially one directed by someone so disliked by a lot of Hollywood, really capable of going all the way? And can the Coen Brothers really repeat just three years after “No Country For Old Men,” and with a remake no less?

These are questions with answers that will be much clearer soon enough (“The Fighter” is actually screening for press today after sneak previewing for the public at AFI last night – which resulted in some mixed-to-positive tweets, for what that’s worth… and suggestively by the time one reads this there could be reviews aplenty), but any Oscar enthusiast should take pleasure in the fact that things could be heading in a contentious direction. One question that might linger all the way to the day the nominations are announced is what films take what seems like two spots that are very much up for grabs (if indeed the eight films mentioned all end up proving and/or sustaining themselves – which is unlikely given history). Right now, it really seems like five or more films could be fighting it out for those slots, with “Another Year,” “Black Swan,” “Rabbit Hole,” “The Way Back” and “Winter’s Bone” all looking like the strongest bets (four of which are still awaiting release). “The Way Back” is the most flexible of the five it seems. A lot of people really like it, it’s from a beloved director that’s never won, and it has a scope that seems right up Oscars’ alley. But then again, it’s getting a tiny qualifying release from a small distributor. It could go over in a big way, or it could not go over at all. 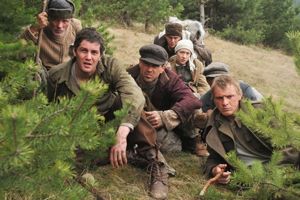 A scene from Peter Weir’s “The Way Back.”

Last year at this time, this column was predicting “Nine,” “Invictus” and “The Lovely Bones” for best picture nods, and “The Blind Side” was a laughable suggestion at best. If any of the noted 2010 films fail to receive the boosts from the critics, Globes and/or Guilds they need to push forward they could be out just as easily. And there’s also still room for a out-of-nowhere surprise. For example, what if James L. Brooks’ “How Do You Know?” is more of a “As Good As It Gets” than a “Spanglish,” despite seemingly everyone’s gut feelings to contrary. Or, on the flipside, what if “True Grit” is the worst thing the Coens’ have ever done, which opens up slots all over? Both unlikely, but both possible. That’s the beauty of the pre-December awards season. Pretty much anything is still possible.

Across the acting categories, that statement could not be more true. Though it’s probably fair to wager that the following actors and actresses can plan on needing a date come February 27th: Annette Bening, Helena Bonham Carter, Colin Firth, James Franco, Natalie Portman, Miranda Richardson, Mark Ruffalo, Geoffrey Rush, and Dianne Wiest. But that still leaves 11 slots open to some guesswork.

The supporting categories in particular really don’t feel fully formed at all. Last year, we knew Christoph Waltz and Mo’Nique were very likely winners from October onwards, while this year it’s hard to decide if anyone is even a likely nominee. But the fact that “True Grit” and “The Fighter” both offer a couple possibilities isn’t making that easier. “Grit”‘s Hailee Steinfeld and “The Fighter”‘s trio of Christian Bale, Amy Adams and Melissa Leo could be full fledged game changers if they go over very well, filling up 4 of the 10 supporting slots. But if they don’t it would open up doors for folks many might not have seen coming.

And while best actor seems rather cemented in its Firth vs. Franco showdown (the only real certainty at this point), best actress remains the most exciting and unforeseen race of the year. Every Oscar blog out there has noted time and time again that this is one of the most competitive races in many years, and for good reason. The fifteen or so women that still seem in contention could have seemed like shoo-ins for a nomination in most other years. Is anyone really safe? Is Julianne Moore really out? And what to make of as-yet-unseens like Gwenyth Paltrow and Reese Witherspoon, and latecomer Halle Berry for “Frankie & Alice” (where she plays a woman with dissociative identity disorder, no less)? All three of them best actress winners that have yet to get a second nomination.

Here’s a category-by-category run down of all the major categories, for what it’s worth. Though looking back at last year at this time, 16 of 20 acting nominees were called, so perhaps things are clearer than they appear.

Quite Possible, But No One’s Seen Yet
8. Mark Wahlberg, The Fighter 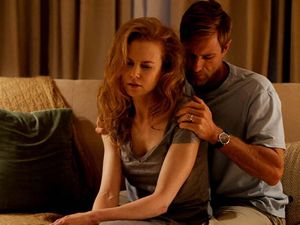 Locks:
1. Annette Bening, The Kids Are All Right

Seem Likely, But No One’s Seen Yet:
2. Christian Bale, The Fighter

Looking Good:
3. Mark Ruffalo, The Kids Are All Right

Seems Unlikely, But No One’s Seen Yet:
13. Jack Nicholson, How Do You Know? 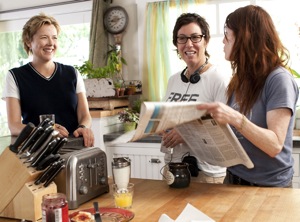 Director Lisa Cholodenko (middle) on the set of “The Kids Are All Right with stars Annette Benning and Julianne Moore. Image courtesy of Focus Features

Locks:
1. David Speidler, The King’s Speech
2. Stuart Blumberg and Lisa Cholodenko, The Kids Are All Right

Seems Possible, But No One’s Seen Yet:
9. James L. Brooks, How Do You Know?

Click here for predictions in all the remaining categories.

Peter Knegt is indieWIRE’s Associate Editor. Follow him on Twitter and on his blog. And get the latest on this year’s award season at indieWIRE’s awards page.

This Article is related to: Awards and tagged Academy Awards, Features, The King's Speech