In Doha, a Young Festival Finds Its Footing

The sovereign state of Qatar (pronounced “khat-er”) is a sun baked peninsula of chalky sand that stretches about 200 kilometers deep into the western waters of the Persian Gulf. Sandwiched between Bahrain to the north, and the United Arab Emirates (it’s sometimes mistaken as a member of the UAE) and Saudi Arabia to the south, Qatar is a relatively small country of about 1.7 million, with around 80% living among and around the fantastical, restless coastal skyline of Doha. Whimsical glass and steel trapezoids, ellipses, spheres, minarets and elongated ovals tell a story that’s become familiar to this region: one of economic and industrial transformation happening at breakneck speed and attracting workers from around the world; also oil and natural gas reserves that have created wealth of a magnitude that’s almost unimaginable.

Yet for all of this urban hustle and hubbub, Doha still sends a strong signal that it is firmly anchored in the cultural and religious traditions of the region. And while Qatari’s are crazy about their sports (the country hosted the hugely popular Asian Games in 2006, and is making a serious bid to host the World Cup in 2022), an appreciation of the arts has played a central role in Doha’s evolution, marked along the way by the 2009 inauguration of the spectacular Museum of Islamic Art and the debut – just days before the film festival began – of the Katari Cultural Village, a sprawling complex of low slung, terra cotta buildings surrounding a magnificent mosque and outdoor amphitheatre that now serves as a sanctuary for artists, writers, photographers, actors and musicians, and also as the headquarters of the brand new Doha Film Institute.

A devoted supporter of the arts and the daughter of the ruling Emir, Her Excellency Sheikha Al Mayassa bint Hamad bin Khalifa Al-Thani invited the New York-based Tribeca Enterprises into Doha to offer expertise, advice, resources, prestige and legitimacy to the conception and creation of the Doha Film Institute and its flagship public program, the Doha Tribeca Film Festival (DTFF). When the partnership was announced in July 2009, there were the expected “Just what we need, another film festival” comments from a jaded independent film community but to its credit, Tribeca tuned out detractors and just got to work. The first Doha Tribeca Film Festival in 2009 did indeed possess film festival characteristics, but the event felt (from the outside, anyway) more like a placeholder for editions to come. The organization had challenged itself to put on a film festival in just a few months because it was mandated and because it was theoretically possible, a situation that echoed in some respects the feverish barn-building spectacle of the very first Tribeca Film Festival in the months following 9/11. It now seems almost old-fashioned for a film festival to grow first from humble beginnings. The 2002 Tribeca Film Festival really ushered in the era of the “mega-festival” where considerable resources (at least by film festival standards) were secured and the ‘humble beginnings’ part was efficiently bypassed. All of a sudden, festivals that lacked history but possessed generous backing and sufficient ambition were competing with festivals that had been around since the middle of the twentieth century. Dubai’s film festival was founded in 2004, Rome followed in 2006, then Abu Dhabi in 2007 and now, Doha.

Since DTFF’s first edition last November, officials announced at May’s Cannes Film Festival the formal launch of the Doha Film Institute, an organization dedicated to building a dynamic and sustainable film industry in Qatar, and the DFI’s management infrastructure has quickly stabilized and matured. With just a little extra time, an experienced team of organizers and programmers assembled a cinematic confetti blunderbuss of a film festival, packed with so many extracurricular and interstitial festival-related activities around the film schedule itself (spanning only four fully-programmed days) that one filmmaker wag suggested that the festival host a ‘movie day’ during the festival to unglue guests from the panels, chats, conferences, networking meetings, hosted lunches, industry confabs and desert excursions.

DTFF’s primary mandate is to shine a spotlight on emerging Arab cinema and talent and expose the region to the international film community, and these efforts are intensely focused and sincere. Kicking off the festival was Rachid Bouchareb’s “Outside The Law”, a gripping epic about three brothers enmeshed in Algeria’s struggle for independence from France following World War II. The film caused some controversy when it debuted at the Cannes Film Festival (the subject is still sensitive to some French people), but the crowd of over 2,000 Qatari’s who turned out at the Katara’s Opera House, Cinema and Open Air Theatre were visibly moved by the French-Algerian director’s action drama, which was reminiscent of ambitious generational epics like “1900” or “Once Upon A Time In America.” 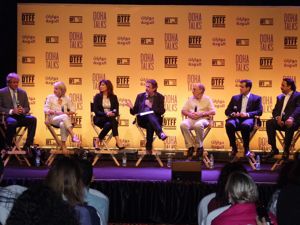 That big opening night set the stage for the following four days of movies – 51 features from 35 countries and 9 Arab shorts – a program built on a foundation of strong regional cinema spiced with some familiar festival favorites and a smattering of not-to-be-denied guilty pleasures. Ten films vied for the first-ever Arab Film Competition prize (indieWIRE reported on the winners over the weekend) but other notable titles in the competition included the amusing “The Mosque”, the new feature from Morocco’s Daoud Aoulad-Syad about a farmer’s attempts to navigate local bureaucracy and public sentiment to have a “mosque” (really just a building front erected for a movie set) removed from his farm. While the rest of the set is long gone, the local townspeople have adopted the mosque as their actual place of worship. Amusing, confounding and deceptively complex, “The Mosque” won a Special Mention from the jury at the 2010 San Sebastian Film Festival. In addition to “Hawi” and “Grandma, A Thousand Times” (both of which were recognized by the jury), the other two world premieres at DTFF were “The Mountain” a Lebanese/Qatari co-production from director Ghassan Salhab, and “Man Without a Cellphone” the debut feature from Palestinian director Sameh Zoabi.

Other highlights in the World Panorama Section included favorites from recent film festivals, such as “Africa United” from the UK, an utterly winning, feel-good tale that charts the odyssey of a group of Rwandan kids traveling across Africa to take part in the World Cup opening ceremony. “Africa United” is a film that, given the right release circumstances and a thoughtful marketing strategy could storm the independent box office in the United States – it’s the kind of film that audiences can really get behind and feels overdue. Also in the “feel-good” category: Taika Waititi’s Sundance favorite “Boy” from New Zealand and Ian Power’s “The Runway”, the latter of which has played at several film festivals but is still holding out for a U.S. festival debut, which should happen early in the new year. Based on a real story “The Runway” follows the story of a young boy who leads his Irish town in helping a lost Spanish aviator get airborne and find his way home. Reminiscent of Danny Boyle’s “Millions”, the film features thoughtfully rendered characters, authentic performances and that signature deadpan Irish wit.

Pedigree festival-circuit titles like Abbas Kiarostami’s “Certified Copy”, Denis Villeneuve’s award-winning “Incendies”, Nigel Cole’s “Made In Dagenham” and Robin Hessman’s “My Perestroika” found appreciative audiences at DTFF and, as if to prove that film festivals don’t always have to feature films low in calories and rich in vitamin and minerals, programmers studded the line-up with high profile Holly- and Indie-wood comfort food like “Machete”, “Stone”, “Casino Jack”, “Secretariat”, “Let Me In” and even “Paranormal Activity 2”. Yum!

Also a big hit at the festival was Egyptian-American comedian Ahmed Ahmed’s documentary “Just Like Us” chronicling his recent tour of the US and the Arab World with a rag-tag band of stand-up comedians as they shatter stereotype and send-up cultural taboos. Ahmed seemed to be everywhere at DTFF, introducing his film, leading a comedy night at La Cigale hotel with fellow comics, participating in the one-day TedxDoha conference (yes, DTFF even had it’s own Ted Conference), opining on the “Do You Speak Comedy? Humor Crossing Borders” panel and, finally, looking jocular in one of several dozen images shot exclusively by the iconic celebrity photographer Brigitte Lacombe for DTFF’s “I Am Film” campaign. Lacombe’s stunning black and white portraits of Western and Arab film artists adorned countless billboards and banners on every street and in every suburb in Doha. Selections from her work since 1975 were featured in an exhibit at the Katara Cultural Center, and her special ability to draw out the beauty of age – the grey-flecked beards and gentle laugh lines of the weary but wise – stand out in welcome contrast to the flawless faces we’re used to seeing.

Logistically, DTFF worked like a film festival that’s been around for years. Way signage at every corner, color-coded shuttle busses running every 10 minutes or a brand new Jaguar summoned at the snap of a finger ready to shuttle you to one of Doha’s many luxury hotels, a magnificent hosted hospitality pavilion (featuring air conditioning units the size of automobiles), all meticulously DTFF branded, signed, sealed and delivered in Arabic and English. DTFF anchored its activity on seven screens at the City Center shopping center (more and more film festivals these days depend on a multiplex) where public screenings started to heat up after lunch with a bustling crowd of locals and ex-pats lining up for tickets, leaving the morning scheduled with sparsely attended Press & Industry screenings; it’s pretty likely some local film buffs would have welcomed the opportunity to attend them. DTFF really hit its stride with some glorious outdoor screening venues however, including the breathtaking Katara Open Air Theatre along the beachfront Esplanade, offering seating for several thousand at the evening galas, as well as the delightful Four Seasons Beach Theatre where audiences settled into deck chairs, dug their toes into the sand and, caressed by a cooling evening breeze, enjoyed the superb picture and sound from a giant movie screen towering above a narrow slip of water. Bliss!

For Qatar’s people, the festival is a gift, even if perhaps they’re not fully aware quite yet just how big a gift it is. But that’s ok – nurturing film appreciation and fostering a new industry into an eagerly anticipated institution with a firm foundation really does take time. And, a seemingly unlimited reserve of fuel-injected, oxygen-rich film initiatives will carry Doha’s nascent film culture only some of the way. Ultimately, it is the region’s storytellers who will attract the greatest attention and when they do, the Doha Tribeca Film Festival will be there to celebrate their achievements.

[Christian Gaines heads up Festival Strategy for Withoutabox, a division of IMDb.com]

This Article is related to: Festivals and tagged Features