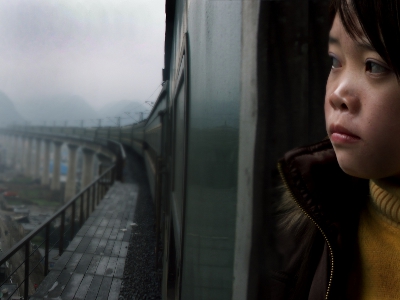 Lixin Fan’s “Last Train Home” led the nominations for the 2011 Cinema Eye Honors, which were announced today at the Sheffield Doc/Fest in the UK by filmmakers Havana Marking (“Afghan Star”), Kim Longinotto (“Pink Saris”) and Cinema Eye Co-chair AJ Schnack (“Convention”). Recognizing excellence in artistic achievements in nonfiction filmmaking, Cinema Eye Honors hands out awards in eleven categories. “Home” was nominated in seven of them, tying the record previously set by both “The Cove” and “Waltz With Bashir.”

Directed by Canadian/Chinese filmmaker Fan, “Home” – which tells the story of a migrant family traveling across China looking for work – was nominated Outstanding Feature, Direction, Production, Cinematography, Editing, International Feature and Audience Choice. Fan himself is nominated in six of those categories, making him the most nominated individual in the history of Cinema Eye.

In the Outstanding Feature category, “Home” was joined by Janus Metz’s “Armadillo,” Banksy’s “Exit Through The Gift Shop,” Laura Poitra’s “The Oath,” and Jeff Malmberg’s Marwencol.” Of those, “Armadillo” and “Gift Shop” each took six nominations in total, while “The Oath” and “Marwencol” each took four.

“Armadillo,” about a Danish/UK military base in Afghanistan, led a bit of Danish invasion at the awards. The International Feature category saw three of five nominations taken by Danish filmmakers, including Michael Madsen’s “Into Eternity” and Mads Bruegger’s “The Red Chapel.”

Banksy was the lone director nominated in the Outstanding Feature category that was shut out of the Directing category, as Poitras, Malmberg, Fan and Metz were joining by legendary documentary filmmaker Frederick Wiseman for his work in “La Danse: The Paris Opera Ballet.” “La Danse” was also nominated in the Cinematography and Audience Choice categories.

The 2011 Cinema Eye Honors for Nonfiction Filmmaking will be held on January 18, 2011 at the newly re-opened Museum of the Moving Image in Astoria, Queens, New York City. The event will be broadcast on television for the first time, on the Documentary Channel.

109 films were eligible for the 2011 Cinema Eye Honors and 88 of those films received votes from one or more members of the nominating committee.

The Cinema Eye Honors were launched in 2007 to recognize and honor exemplary craft and innovation in nonfiction film. Cinema Eye’s mission is to advocate for, recognize and promote the highest commitment to rigor and artistry in the nonfiction field. Check out indieWIRE‘s report from last year’s awards here.

Full list of nominations for the 4th Annual Cinema Eye Honors for Nonfiction Filmmaking are available on the next page.

The Oath
Directed And Produced By Laura Poitras

Exit Through The Gift Shop
Chris King And Tom Fulford

The Sound Of Insects – Record Of A Mummy
Norbert Moeslang

Into Eternity
Directed By Michael Madsen Produced By Lise Lense-Moller

Exit Through The Gift Shop
Banksy

The Autobiography Of Nicolae Ceausescu
Directed By Andrei Ujic

Nostalgia For The Light
Directed By Patricio Guzman

Steam Of Life
Directed By Joonas Berghaell And Mika Hotakainen

Exit Through The Gift Shop
Directed By Banksy

Inside Job
Directed By Charles Ferguson

Joan Rivers: A Piece Of Work
Directed By Ricki Stern And Annie Sundberg

Dock Ellis And The Lsd No-No
Directed By James Blagden

This Article is related to: Awards and tagged Documentary, Exit Through The Gift Shop