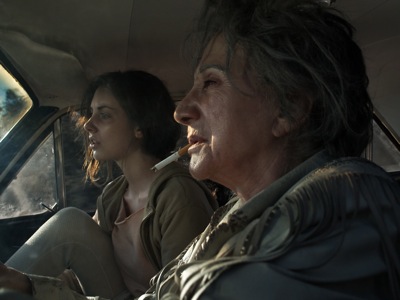 D.G. Brock’s debut feature, “Montana Amazon – The Adventures of the Dunderheads,” was named as the Best Feature Film at the seventh annual Big Apple Film Festival. The comedy, starring Academy Award winner Olympia Dukakis (“Moonstruck”), Oscar nominee Haley Joel Osment (“The Sixth Sense”) and rising star Alison Brie (“Community,” “Mad Men”), follows a rural Montana family whose secluded existence is shattered after an accidental murder forces them to evade authorities on an attempted escape to Canada. Matters become complicated, however, when the trio accidentally drive south for their journey -taking them on a road trip through the American West, culminating in Mexico. Dukakis and Osment also served as Executive Producers on the film.

“Barbershop Punk,” a documentary from Georgia Sugimura Archer and Kristin Armfield, won the award for the Best Documentary Feature. The film follows an independent-minded Barbershop quarter aficionado Robb Topolski who takes on the biggest cable company in the nation in his quest for fewer privatized restrictions on the internet. The film has screened at various festivals this year, including SXSW and Silverdocs.

The Big Apple Film Festival, hosted by the New York focused Big Apple Film Society, is an annual event that showcases new independent films and filmmakers from the city, across the country and around the world. Along with numerous local premieres, this year’s edition featured a 20 Year Anniversary screening of Martin Scorsese’s classic, “Goodfellas.”

Other winners in this year’s festival were: