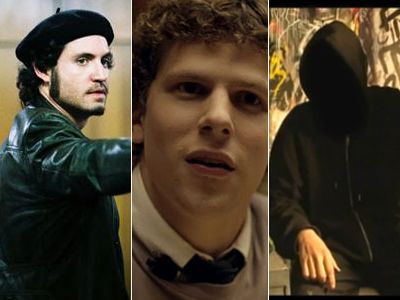 Together those four films dominated many other categories in the poll. “Carlos” star Edgar Ramirez was named the best lead performance of the year, with “Social Network”‘s Jesse Eisenberg, “Black Swan”‘s Natalie Portman, and “Winter’s Bone”‘s Jennifer Lawrence following (interestingly, while Ramirez and Eisenberg were 1-2 in the genderless category, the following 7 slots all went to women). “Bone””s John Hawkes was named the best supporting performance of the year, beating out “The Fighter”‘s Christian Bale, “Fish Tank”‘s Michael Fassbender, and “Animal Kingdom”‘s Jacki Weaver. Also notable was that “Another Year”‘s Lesley Manville placed in the top 10 of both lead and supporting lists, getting 17 mentions in the former and 12 in the latter.

“The Social Network” also topped the best director and best screenplay categories. David Fincher was named best director of 2010, narrowly defeating “Carlos”‘s Olivier Assayas and “Black Swan”‘s Darren Aronofsky, while “Network” scribe Aaron Sorkin took best screenplay honors by a remarkable margin. Of the 125 ballots, 40 named Sorkin best screenwriter, while “Everyone Else” screenwriter Maren Ade was a very distant second with 9 votes (“Everyone Else” – a German relationship drama – was also voted the fifth best film of the year).

Meanwhile, an as-yet-unmentioned film dominated two other categories in the poll: best documentary and best first feature. “Exit Through The Gift Shop,” the mysterious is-it-a-documentary from the equally mysterious British street artist Banksy, was named the top choice in both categories, doubling the votes of second place finisher “Sweetgrass” in the former, and narrowly defeating the likes of “Animal Kingdom” and “Tiny Furniture” in the latter. “Gift Shop” also placed 11th in the overall best film list.

In the poll’s best undistributed film category – which asks voters to pick the best film that has yet to find distribution in the United States – Jean-Luc Godard’s “Film Socialisme” and Andrei Ujica’s “The Autobiography of Nicolae Ceausescu” tied for the most votes with 26 each, followed by Raoul Ruiz’s “Mysteries of Lisbon” and Hong Sang-soo’s “Oki’s Movie.” The top American pick was Errol Morris’ doc “Tabloid.”

The complete results in all categories are below. A special thanks to all the critics and bloggers who participated, and to indieWIRE staffers Daniel Loria, Nigel M. Smith, and Bryce J. Renninger for their work in helping compile the results of the poll. Many of the critics also included their written thoughts on the year in film, and indieWIRE has them compiled for easy reading here.