Filmmakers Toolkit | Happy Sundance! or, 12 Reasons Why You Will Succeed 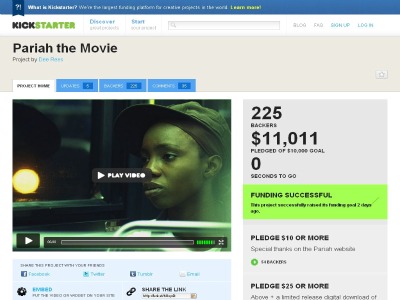 EDITOR’S NOTE: The following is from entertainment attorney and occasional indieWIRE contributor Steven Beer. While there are reasons why indie filmmaking isn’t known for its galloping optimism, he makes some compelling arguments for why things may be better than we think. Agree or disagree? Leave them in the comments.

Fact: There has never been a better time to make and produce independent films. In this space a year ago, I envisioned a “Renaissance Decade of Filmmaker Empowerment.” Today there are fewer boundaries preventing filmmakers from telling their stories. Similarly, there are more resources and options available to realize a project’s potential. In short, the state of the union is improving.

Here is why we are encouraged about the prospects for creating, producing and distributing breakthrough independent films.

Sundance 2011 signals the official start of a new year for independent cinema. Like an industry convention, professional colleagues, filmmakers and fans of indie cinema converge this week on Park City to screen world-class films, discuss new projects and debate the condition of independent film. The consensus perspective of many industry colleagues and observers headed to Park City is that our darkest days are behind us. One year into the Empowerment Decade, filmmakers are focused on creating transformative films and working towards sustainable careers.

The landscape for independent films continues to evolve. Although bumpy and uneven, the new terrain holds promise, opportunity and innovation. Today, empowered filmmakers define success on their own terms, assume responsibility for their projects and refuse to make excuses. Collaborating with professionals skilled in the art of project planning and problem solving, empowered filmmakers craft customized and scalable marketing and distribution plans that support their goals. Perhaps the single greatest factor determining success is their ability to evaluate and discard antiquated business models that served a different community and marketplace.

Empowered filmmakers are finding more ways to finance films. Established film financiers report that looser capital markets and less overall paranoia are helping to cash flow projects. The amount of equity required to finance a film has diminished thanks, in part, to the confluence of federal and state production incentives. The federal government gave indie filmmakers a gift this holiday season when it re-instituted Section 181 of the Jobs Creation Act — a federal tax credit for qualified film and television productions. After a one-year hiatus, investors may once again elect to deduct one-hundred percent of their qualified expenditures up to the first $15 million of a budget on an accelerated basis. Additionally, as a result of competition for production dollars, forty-three out of fifty states feature film production incentives. In support of many of these programs, leading banks have structured loan vehicles to cash flow the prospective tax credits and rebates.

Crowdfunding is gaining traction. Websites that utilize social media, such as IndieGoGo, Kickstarter, and RocketHub, appeal to patrons of the arts who may receive project-related merchandise and on-screen credits in return for contributions. “Tapestries of Hope,” a documentary film exposing the gravity of rape issues in Africa, used crowdfunding to raise over $20,000 and market the picture. The film screened in over 100 theaters. Other projects such as “Wish Me Away” and “Hulk,” which are still in production, used crowdfunding to raise $22,000 and $76,000, respectively. Slava Rubin of IndieGoGo reports that at least three films at Sundance this year relied on crowdfunding as a financing tool.

The cost to produce indie films is declining. The emergence of microbudget programs at film festivals, such as the Next category at Sundance, supports the view that some of the most original filmmaking comes from budgets where filmmakers can take risks without preoccupation for returns on investment. Across the board, there is a new and sober consciousness about economies truly required to produce a film. Empowered producers understand that, given the challenges within the distribution marketplace, they must do more with less.

The tools for quality filmmaking are less expensive. Superb quality HD video cameras, such as the Canon XL-H1, the Red Cam and the Panasonic HVX-200A, are now more affordable than ever. Post-production costs have also declined as cutting edge editing systems that streamline workflow are attainable even on a modest budget.

A-List talent has become more affordable (given the right project). Ryan Gosling and Michelle Williams actively collaborated on and acted in the current low-budget breakout “Blue Valentine.” The cost to secure music for film has also become a less expensive proposition. In a refreshing change, many music artists are actively seeking placement of their tracks in films for little to no money as they seek exposure for their masters and publishing catalogues. For one project at Sundance, a major record label ventured with a film’s producers and licensed an artist’s catalogue for a modest flat rate for their mutual benefit.

Marketing options for filmmakers are expanding. Empowered filmmakers are weaning themselves off of dependence on traditional cookie cutter approaches and deploying innovative hybrid methods to tap into new audiences. “Super,” directed by James Gunn and produced by Ted Hope and Miranda Bailey, synergized social media promotion on Facebook and Twitter with a visit to Comic-Con 2010 in order to build a buzz. Months before the film’s premiere, the film’s YouTube content eclipsed more than 100,000 page views. Empowered producers appreciate that websites exist as potential platforms to secure and motivate vital core audiences through digital word of mouth. Without question, social networking communities figure to play an increasingly important role in generating awareness and motivating audiences. Finally, empowered filmmakers are also open to harnessing underserved markets. “City Island,” one of the most successful independent films of 2010, took in nearly $7 million in part by zeroing in on an older demographic and making it a target of its marketing and distribution campaign.

There are more distribution avenues available. Empowered filmmakers are embracing hybrid distribution platforms, mixing old and new media to connect a particular film to its target audience. While revenues for DVD sales and rentals continue to decline, video on demand sales increased by roughly $300 million and digital download sales grew by $96 million last year. Those that take advantage of the VOD platform can realize huge gains. Magnolia Pictures’ “All Good Things” reaped over $4 million from VOD sales prior to its theatrical release.

The line between the personal computer and home television is blurring. These devices are becoming further intertwined through digital content offerings. This week, Comcast and venture capital firm New Enterprise Associates teamed up with documentary digital distributor SnagFilms (indieWIRE’s parent company), investing $10 million that will allow SnagFilms to begin acquiring and distributing narrative features. Even Netflix and Blockbuster are beginning to de-emphasize DVD rentals and increase their focus on streaming content.

Producers are exploiting alternative distribution options. These include semi-theatrical campaigns incorporating not-for-profit organizations, museums, faith based institutions, schools and universities. One success story is “Food Matters,” a documentary that declined a theatrical or festival release. Instead, they partnered with online retailers, social networking sites and affiliated health sites to begin selling DVDs and pay-per-view streams online. The “Food Matters” team sold over 60,000 DVDs within the first six months and used this initial online success to secure more traditional deals with distribution companies.

Empowered filmmakers are re-exploring traditional distribution. Such as? The theatrical release. Today there are many specialty theaters prepared to book and market digital films. At least one such venue, the Quad in New York City, offers a publicist dedicated to securing reviews from nationally recognized publications, which can be valuable for selling a film or raising money for the next feature. Landmark Theatres’ Truly Indie self-distribution initiative has launched many successful titles in key U.S. markets during its five years of operation.

As a community, we can take heart in developments supporting an improved and robust climate for indie filmmaking. While the Empowerment Decade has only just begun, the forecast for the foreseeable future is sunny with a high probability of inspired filmmaking.

Steven C. Beer is a shareholder in the international entertainment practice of Greenberg Traurig’s New York office. He concentrates his practice on film, music, television, licensing, and media law. He has served as counsel to numerous award-winning writers, directors and producers, as well as industry leading film production, film finance, and film distribution companies. He wishes to acknowledge the assistance of Tyler McGuire J.D., who contributed to this article.

This Article is related to: Uncategorized and tagged Pariah