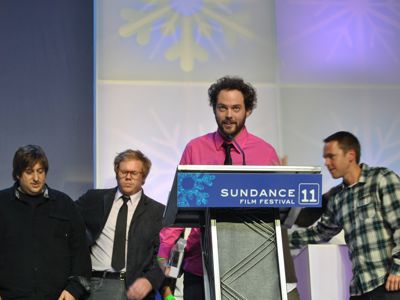 The 2011 Sundance Film Festival has announced its awards. indieWIRE was on the scene at the ceremony, and has a complete list of winners below.

Drake Doremus’s romantic drama “Like Crazy” – one of the big sales of the fest – led the U.S. Dramatic Competition.

“Thank you to my mom and dad for making me believe in love so I could make this film one day,” Doremus said on stage.

The film follows young American guy and a young British girl meet in college and fall in love. Their love is tested when she is required to leave the country and they must face the challenges of a long-distance relationship. Read indieWIRE’s review here.

“I have so much support in my life,” Durkin said, affectionately pointing to his parents and wife in the audience.

Presenter America Ferrera declared this year’s Sundance “year of the actress” when presenting the special jury prize, leading everyone to wonder which actress would take the prize. In the end, “Like Crazy”‘s Felicity Jones won (over the likes of Elizabeth Olsen and Brit Marling).

“When I introduce the film I cried,” “Another Happy Day” writer/director Sam Levinson said upon winning the screenwriting award. “So I don’t know what the fuck’s going to happen now.”

“In 1994 Oregon became the first state to legalize physician-assisted suicide,” the film is described. “‘How to Die in Oregon’ gently enters the lives of terminally ill Oregonians to illuminate the power of death with dignity.

“It’s an incredible honor to be here,” Richardson said. “First I need to acknowledge the incredible documentaries in this section.”

“Resurrect Dead: The Mystery of the Toynbee Tiles,” “If a Tree Falls” and “Being Elmo” were among the other major winners.

Anne Sewitsky’s “Happy Happy” led the World Dramatic competition winners, taking the Grand Jury Prize. “A perfect housewife, who just happens to be sex-starved, struggles to keep her emotions in check when an attractive family moves in next door,” the film is described by the fest.”

Paddy Considine’s “Tyrannosaur” was also a major winner in the section, taking directing and a special jury prize for acting.

The World Documentary section saw Danfung Dennis’s “Hell and Back Again” take top honors, winning the grand jury prize and cinematography. Told through the eyes of one Marine from the start of his 2009 Aghanistan tour to his distressing return and rehabilitation in the U.S., “Hell” witnesses what modern “unconventional” warfare really means to the men who are fighting it.

“This is for those who didn’t come back,” Dennis passionately said on stage..

“I think they couldn’t be here because the adoption papers came through for their own chimpanzee,” Braun joked. 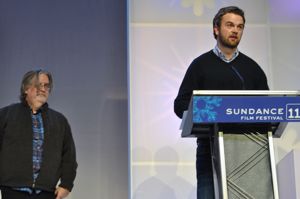 “How to Die in Oregon” director Peter D. Richardson takes to the stage to receive his Documentary Grand Jury Prize Saturday night. His film explores the state’s law that sanctions physician-assisted suicide. “Simpson” creator Matt Groening is in the background. Photo by Brian Brooks/indieWIRE

Grand Jury Prize, Documentary:
How To Die In Oregon

The Best of NEXT Audience Award:
to.get.her

World Cinema Cinematography Award, Dramatic:
All Your Dead Ones 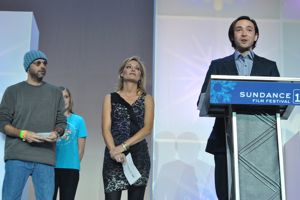 Out of Reach, Director and Screenwriter: Jakub Stozek