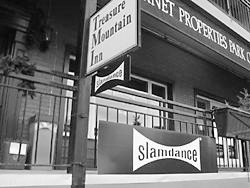 There are three competitive divisions at Slamdance: Grand Jury, Audience Awards and Special Sponsored Awards provided by Kodak, Panasonic, Dos Equis and Good Health. In addition this year Slamdance adds a theatrical distribution award to best feature and short film, offering an alternative to the traditional US theatrical system. Theatrical showings of the winning short and feature program, along with selections from the Grand Jury and Audience Award winning films will be screened in several domestic venues throughout the year, including the IFC Center in New York and 14 Pews in Houston.

Slamdance’s feature competitions are limited to first-time filmmakers working with production budgets of $1 million or less. In addition, this year Slamdance donated 10 percent of its Park City box office proceeds back to the filmmakers.

“Not every filmmaker is going home with a Sparky award but like never before it seems everyone is a winner at Slamdance,” commented Peter Baxter, Co-founder and President of Slamdance in a statement. “By coming together as a community, each of our filmmakers has been empowered by what Slamdance has created this week and in the long run I think this experience will be most useful and rewarding.”

The 17th Slamdance Film Festival winners with descriptions and credits provided by the festival.

Special Jury Mention: “Without,” written and directed by Mark Jackson

This Article is related to: News and tagged Slamdance Film Festival