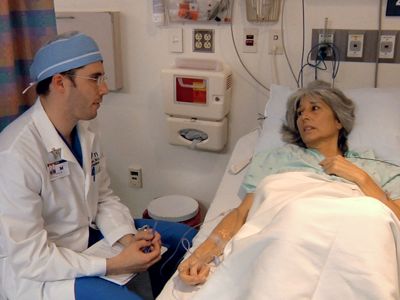 Movies about terminal illnesses are ready-made for emotional manipulation, a fact that director Peter Richardson exploits to the fullest extent in “How to Die in Oregon,” his devastating portrait of Oregonians taking advantage of the state’s Death with Dignity Act. Despite assuming a one-sided perspective on the divisive issue, Richardson’s moving documentary artfully lingers on its dark topic with incessantly powerful results. Surveying a handful of cancer-ridden people considering the self-administered way out—usually, taking a lethal dose of Seconal, an option legalized in 1994—”Oregon” works like a retroactive propaganda piece arguing for the existence of the act. It shows the dignity in droves.

The selling point for “Oregon” is the extent of its access. The movie begins and ends with relatives gathered around dying subjects as they slowly fade away (in the opening shot, an entire death takes place on camera). These uneasy ceremonial proceedings capture the complex decision-making process of voluntary death. Over 500 Oregonians have chosen that route, and Richardson samples a few of them. His interviews primarily consist of those willing to take the medication and the volunteer community involved in helping to administer it. Although less political than philosophical, the movie does confront the topic’s controversial nature through its recent history.

Richardson follows a fervent activist whose husband didn’t live long enough to take advantage of the law, and briefly reveals its downside with the case of Randy Stoup, an Oregonian denied chemotherapy and offered assisted suicide instead. “Oregon” makes it clear that Death with Dignity only works when the dying have personal convictions about taking advantage of it. “They want medication for control,” says one activist. “We present choice. We don’t represent death.”

Despite obviously supporting the law’s existence, “Oregon” exudes a certain creepiness about the culture surrounding assisted suicide. While the terminal patients make their decisions when the decisions must be made, others linger in the world surrounding that dialogue with inexplicable dedication. Few of them get a chance to explain their commitments, since Richardson focuses on a flurry of case studies that demonstrate the effectiveness of the act, regardless of the morbidity required in sustaining it. His central intent is defining the dignity. One of the more haunting moments centers around retired TV host Ray Carnay recording his own eulogy.

Eventually, Richardson funnels his wide view into the singularly poignant case of a middle-aged woman suffering from liver cancer. Outliving her six-month prognosis, she starts to reconsider her chances, talking through her intellectual process with remarkable candor. Obviously selected for her eloquence, the 54-year-old Cody Curtis becomes the movie’s de facto guide. In the absence of an ideologue, she’s the best mouthpiece Richardson could ask for.

As Richardson moves between interviews and verité footage of Curtis’s home life, the serene setting of “Oregon” adds to its solemn atmosphere, conveying the idea of a sacred concept sustaining the act’s existence. Never less than gut-wrenching, the documentary obviously displays unrelenting compassion toward its subjects, and hence lacks the alternative point of view that would make its argument more complex. (The only real opposition comes from a physician. “That’s not the practice of medicine,” he says.)

For the most part, Richardson steers away from polemics and lets those committed to the possibility of voluntary death justify themselves. “There’s a certain grace to accepting the inevitable,” Curtis says. That stance connects Richardson’s project with the Oscar-nominated short documentary “The Last Campaign of Governor Booth Gardner,” which also deals with Washington’s Death with Dignity act. That story, however, features an argument about the right to choose; “Oregon” is an ode to exercising it.

HOW WILL IT PLAY? Undeniably moving, Richardson’s documentary is also incredibly tough to watch, but should play well on both the festival circuit and on HBO.