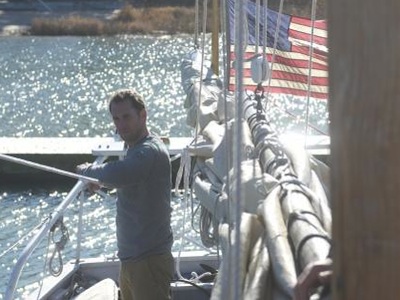 Disarming in its subtly, “A Year in Mooring” is the quiet cinematic journey about the inevitability of change. Starring Josh Lucas in his first leading dramatic role, “A Year in Mooring” follows the story of a successful businessman (Lucas) attempting to resurrect his life. Entering an idyllic harbor as a broken and haunted man, he buys and boards a dilapidated sailboat. Walking an isolated line between solitude and redemption, he’s watched by three equally mysterious residents: a waitress (Ayelet Zurer), the veteran mariner (James Cromwell), and a newly single father (Jon Tenney). [Synopsis courtesy of SXSW]

[indieWIRE invited directors with films in the SXSW Narrative, Documentary and Emerging Visions sections to submit responses in their own words about their films. These profiles are being published through the beginning of the 2011 SXSW Film Conference and Festival. To prompt the discussion, indieWIRE asked the filmmakers about what inspired their films, the challenges they faced and other general questions. They were also free to add additional comments related to their projects.]

Responses courtesy of “A Year in Mooring” director Chris Eyre.

Using images to delve into the past…

I became a filmmaker when I started taking pictures as a teenager. I photographed everything — people, animals and many landscapes. I didn’t know why, but as a Native-American adoptee, I first started looking at all the historical photos of my own tribe in high school and tried to figure out who all these distant relatives might be. I especially loved the historical photos by Edward Sheriff Curtis. I found out later that my great, great grandfather on my Cheyenne-side was photographed by Curtis in 1899. His name was “Cohoe/Nohoe” or “lame man” (due to a bad leg). By using images, I was trying to go back somewhere and understand more of who I was or who my biological people were that I had lost.

My new movie “A Year in Mooring” uses landscapes as atmosphere to help tell the characters stories. Those are the type of movies I like best, one’s that could come from a lost photograph.

How it all came around…

In 2007, I was screening a movie I directed for Showtime at Willamette University in Salem, Oregon. After the Q&A, a tall 6’5″ man approached and said he wanted me to direct his screenplay. I was flattered, assumed he was un-produced, and there was no financing attached — I was right. This polite and spirited man turned out to become a great friend; screenwriter Peter Vanderwall. I asked if he would send the script to my agent. Three months or so later, I received a call from my agent Nancy Nigrosh. She had looked at this unsolicited screenplay and wanted me to read it. It was a script that moved everyone, but most importantly it moved producer Sally Jo Effenson of Joule Films, who I’ve known for almost 20 years. She got it!

“I wanted it to feel real, spirited and weatherly”…

Given the atmosphere of the script and the organic nature of the character’s journey over the course of a year in the harbor with the elements, I was very aware I didn’t want it to feel staged or over-rehearsed. I wanted it to feel real, spirited and weatherly.

After planning our shots and some rehearsing, we came up with a solution that was recited on set in situations that either weren’t working or when it seemed we needed more. We would say, “Let it reveal itself.” And, it always does. Our story continued to reveal itself to all of us during this collaborative process. Without the forcing of a method or approach, this movie was about a time and place of its own, right down to its rhythm. The characters are never named in the script. For instance, Josh Lucas’ character was simply “the young mariner.” In the script the characters read in a very autonomous way further enhancing the mystery of who they are and what had happened in their lives. The approach was to let the film speak.

The biggest challenge in developing a movie is always the financing especially a drama. Creatively, one of the harder development issues was where to shoot the movie. Conceptually, we were open to anywhere with a beautiful harbor (though originally Peter had set it at the Columbia River in Oregon, which is near where he lives). When we found Bowers Harbor in Michigan, we knew the minute we saw it that was the harbor. It was isolated and beautiful, free of wires, industrial buildings and trashy clutter — a place where a person could get away from the world and disappear. So, I called Peter and asked if he would change his beautiful script to Lake Michigan. Silence from the other end of the phone, finally, he said, “let me look at that.”

The most challenging obstacle we overcame was definitely the weather, but we were extremely lucky once we committed to shooting. When you see the movie with sunsets and snow and all the between of seasons, I can only say it was good karma. We shot the movie on a tight schedule yet had to reflect a “movie-year” on screen, so weather gods – “Thanks!!”

A remake of the 1983 movie “Running Brave” that follows the true-life story of Native American Olympian Billy Mills from his time growing up on the Pine Ridge Indian Reservation in the 1950s to becoming the only American to win a Gold Medal in the 10,000 meter long-distance race at the 1964 Tokyo games. To this day, his victory is described as one of the greatest moments in Olympic history.