Steven Soderbergh: When you're talking about yourself, less history, more mystery. And don't Twitter 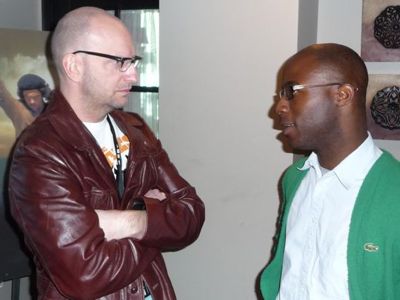 Last May, Steven Soderbergh received an honorary degree from Pratt Institute for his artistic contributions to the filmmaking community. Soderbergh returned to the Institute on March 24 as part of Pratt’s 17th Annual President’s Lecture Series to offer his opinions on what constitutes a successful directing career. Reflecting back on his catalog of over 24 films, including the “Ocean’s Eleven” series, “Erin Brokovich” and “Traffic,” for which he received the Best Director Academy Award, Soderbergh spoke for over 40 minutes about such varied topics as cultivating a point of view, the role of art in society, changes in technology and the importance of remaining anonymous. In the subsequent Q&A, the director also touched upon the recent news that he will retire after completing his next two movies, “Liberace,” with Micheal Douglas, and “The Man From U.N.C.L.E.,” a take on the ’60s spy series that will star George Clooney. Below are some highlights from the conversation.

On his motivation for retirement: “The most blunt answer I can give you is that as someone who spends a lot of time trying to get better, I’m not improving in the ways that I think will result in me making something as extraordinary as I think things ought to be or as things that I’ve seen. I’ve run out of things to try. What I want is to find something else to do that makes me 17 years old again, and then I will have, if necessary, multiple decades of work to get good at it. That is more exciting to me than trying to grind out the last little corner of what I can figure out over the next 20 years and make stuff that I feel like I’ve made before…I’m not saying there aren’t more ideas out there. I see other people do them. I’m just saying I’m running out.”

On the why he believes so strongly in remaining anonymous, to the point of refusing to pose for photos when he does interviews: “I’ve constructed my life in such a way that I can still be the man on the bus. My ability to remain the observer and not be observed and not be the focus of a lot of people’s attention gives me access to behavior and ideas that some other filmmakers are not being exposed to…I’m really lucky, I don’t get bothered…When I go to McDonald’s, people jump the line in front of me all the time…You have to make a conscious effort to organize your life in such a way that you can still be the observer.”

On speaking to the press: “There’s no class to teach you about it…When you’re being interviewed, you really do need to imagine everything you say being blown up to 72 point type…When you’re talking about yourself, less history, more mystery. And don’t Twitter.”

On what happens when something isn’t working in the editing room: “If the movie’s really not working, really not coming together, I’ve never seen it fixed by making a series of tiny little changes…It usually involves a limb coming off. You have to be open to that idea.”

Tips on storytelling: “In my experience, you have about 15 minutes to really screw with people and then you have to start coming clean about what you’re trying to do.”

On how to approach actors: “Hostility and chaos are interesting as subjects but I don’t find them very interesting as methods. Your actors and crew are your family and the power that you wield over their mood and their experience is really equal to that of a parent over a child, or that of Donald Trump over anyone.”

On starting out: “When I first got out of college, I didn’t know anybody. I had no connections to the film business at all. All I had was a lot of energy and a lot of interest. And I felt like, ‘Why can’t it be me?’ It’s going to happen to somebody.”

On changes in technology: “The democratization of the technology has been a wonderful thing in a lot of ways. It means that everyone can make a film…[but] I still think only a handful of them will be good.”

On the 2002 incident in which a man in Germany decided not to be eaten by a serial killer after viewing “Ocean’s 11” with said killer: “At least I know when somebody’s watching a movie, for the most part, they’re not doing something terrible to another human being. So, for two hours everyone’s getting a break from the psychopath watching ‘Ocean’s 11.’ We saved a guy’s life.”

On the purpose of art: “Why do we create? What is art for exactly? I don’t always know the answer to that but…I guess the answer is that, in the moment of experiencing art, you’re not alone…You’re connected to another human being, often in a way that transcends description…I believe we would be diminished if we didn’t have that particular form of human connection…I want in that moment, for that person to feel like I gave them everything that I have. I feel like I owe them that. I feel like we owe each other that.”

[Soderbergh’s upcoming films, “Haywire,” with martial arts artist Gina Carano, and “Contagion,” a thriller about the outbreak of a fatal disease, will be released later this year.]

This Article is related to: Toolkit and tagged Inside Info, Interviews, Toolkit