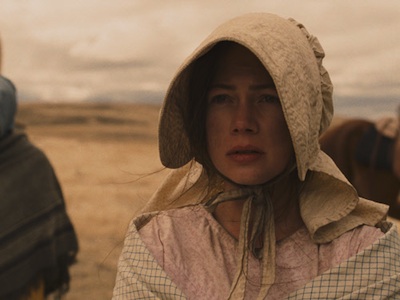 While the overcrowding of last week’s crop of debuts resulted in a rather dismal weekend box office, this weekend once again sees a large offering of new specialty films hoping to stop that from being a trend. Opening in limited release is Kelly Reichardt epic indie Western, “Meek’s Cutoff,” Robert Greene’s documentary about his teenager half-sister, “Kati With an I,” Keanu Reeves-Vera Farmiga starrer, “Henry’s Crime,” Joao Pedro Rodrigues acclaimed Portuguese import, “To Die Like a Man,” “No Wave” documentary, “Blank City,” and “Meet Monica Velour,” which features Kim Cattrall as an aging porn star. Add that to two wide releases with considerable indie cred – Joe Wright’s “Hanna” and David Gordon Green’s “Your Highness” – and it’s April showers indeed.

In this case, quantity doesn’t seem to be trumping quality. With a few notable exceptions, this week’s debuts offer a diverse and critically acclaimed group of films, as this edition of indieWIRE‘s new weekly column makes clear. Highlighting the top critics picks from our criticWIRE poll, it finds five new films – aforementioned “Cutoff,” “Kati,” “Hanna,” “Blank City,” and “To Die Like a Man” – all receiving grade averages of a “B” or higher. While “Kati” and “Man” (both opening on single screens in New York City Friday) technically took the top averages, the little seen films did so below with only a handful of reviews. So the honor of the critical consensus pick of the week (the top scoring film with five or more grades) goes to “Meek’s Cutoff”, which averaged a “B+ from 34 different critics. That included “A” level grades from the likes of Justin Chang, Ben Kenigsberg, Guy Lodge, Mark Olsen, B. Ruby Rich, and indieWIRE‘s own Eric Kohn.

Kohn summarized his take on 7 of this week’s releases below, suggesting there’s just about something for everyone this weekend (though not everyone will be pleased):

In “Blank City,” a documentary about the No Wave movement that dominated lower Manhattan creativity in the seventies and eighties, filmmakers like Jim Jarmusch and John Waters speak nostalgically of a bygone era where local directors made movies that defied storytelling norms. One of the directors keeping that tradition alive is Kelly Reichardt, whose mesmerizing feminist Western “Meek’s Cutoff” finally opens this week several months after its festival run (another is Joao Pedro Rodrigues, whose remarkable “To Die Like a Man” opens at New York’s IFC Center Friday).

The subject of a retrospective at the Museum of the Moving Image last weekend, Reichardt has steadily gained prominence in the alternative film world ever since her contemplative sophomore feature “Old Joy” turned heads in 2006. With “Meek’s Cutoff,” her second collaboration with Michelle Williams after 2008’s “Wendy and Lucy,” Reichardt delivers her most complex effort yet, a period piece set in the late 19th century about Oregon Trail stragglers led astray by a shifty guide (Bruce Greenwood). It takes Williams, as the defiant Emily Tethertow, to set things straight–with a shotgun. Reichardt cleverly mixes up the classic girl-and-a-gun formula by putting them together at last.

But “Meek’s Cutoff” isn’t the only opportunity to watch strong-willed women on the big screen this weekend. Two of the other highest-rated new releases on criticWIRE, “Hanna” and “Kati with an I”, both focus on teenage girls dealing with the onset of adulthood. However, the similarities end there – Hanna, played by Saorise Ronan with an intense, measured gaze, avoids FBI agents tracking her rogue agent father by unleashing her intense martial arts skills on any threat that comes her way. Kati, the real life subject of documentarian Robert Greene’s sympathetic portrait, faces the big question mark of her future in the days leading up to her high school graduation in Piedmont, Alabama. No punches are thrown, but Greene shows Kati – his half-sister – in a constant battle with the uncertainty her future holds.

Audiences seeking more familiar faces this weekend will find them in laid-back mode. Keanu Reeves plays an characteristically dazed toll booth clerk arrested for a bank heist he didn’t commit – until he gets out of prison and decides that, since he did the time, he might as well do the crime. Egged on by a sagacious James Caan and a nefarious Fisher Stevens, Henry only faces opposition from his newfound love, played by Vera Farmiga. The whole thing amounts to a breezy caper held together by Reeves and Farmiga’s screwball chemistry, which culminates in a daffy scene where the two of them reenact the climax of Chekhov’s “The Cherry Orchard.” Overall: Minor Keanu, but still Keanu.

After all these years, nobody does deadpan like Reeves, possibly because he commits himself to the part. “These characters have a strong interior life,” he told me at the Woodstock Film Festival last year, which is a lot more than one could say about the leads in David Gordon Green’s “Your Highness,” also opening this week. Green’s waltz into the arena of stoner comedies with partner-in-crime Danny McBride follows “Pineapple Express” as another tonally confusing, directionless farce with intermittently funny one-liners. Despite the fantasy elements of this doggedly offbeat medieval yuk-fest – a sub-genre that, by the way, Mel Brooks pulled off a whole lot better with “Robin Hood: Men in Tights” – the weirdest aspect of “Your Highness” is seeing so many talented people in material that’s beneath them.

Check out the links below for more extensive takes on “Meek’s Cutoff,” “Hannah,” “Kati With an I,” “To Die Like a Man,” “Henry’s Crime,” “Your Highness,” and other new releases. Also offered is the top ten criticWIRE scores for films already in theaters, which is currently topped by 2010 Cannes Film Festival Palme d’Or winner “Uncle Boonmee Who Can Recall His Past Lives” for the second week running.

criticWIRE: Films Opening This Week
NOTE: The averages listed here are current as of the publishing of this article. They are subject to change as new grades come in, and will be updated in next week’s edition of this article.

Kati With An I (iW film page)
Average criticWIRE rating: A-

To Die Like a Man (iW film page)
Average criticWIRE rating: A-

1. Uncle Boonmee Who Can Recall His Past Lives (iW film page)
Average criticWIRE rating: A-