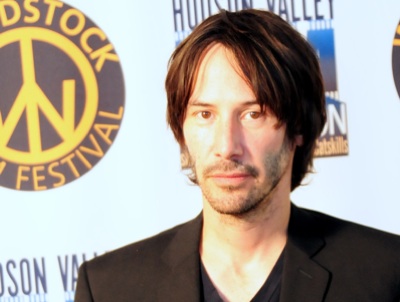 Over the last eleven years, the Woodstock Film Festival has honored numerous movers and shakers from across the spectrum of the international film community, but few guests have turned as many heads as Keanu Reeves. The recipient of Woodstock’s inaugural Honorary Excellence in Acting Award, Reeves made a surprisingly personable visit to the festival over the weekend. Sans publicist or limousine as he strode down Woodstock’s quaint center of town, a prototypical Hollywood face came down to Earth.

At the festival’s awards ceremony on Saturday night, Reeves accepted his honor from a very pregnant Vera Farmiga, accepting it “on behalf of myself and everyone I’ve ever worked with,” which sounded like an acknowledgment of Woodstock itself for plugging his latest endeavor. Slipping away from the New York City production of Mark Mann’s “Generation Um…,” Reeves journeyed upstate to spend two days in Woodstock for the U.S. premiere of “Henry’s Crime,” an understated comedy directed by Malcolm Venville from a screenplay originally conceived by Sasha Gervasi, whose last outing was the heavy metal documentary “Anvil! The Story of Anvil.”

Despite Reeves’ celebrity, “Henry’s Crime” has very few Hollywood attributes. It’s a romance posing as a heist movie with hardly any violence and no death. As the titular character, Reeves plays an uninspired tollbooth attendant whose salvation from boredom arrives when he gets imprisoned for a bank robbery he didn’t commit, allowing for a handy exit strategy from his aimless marriage and generally purposeless existence.

Once out of jail, he enlists the help of a former cellmate (James Caan) to commit an actual bank robbery, guided by the dubious logic that, having done the time, he might as well commit the crime. Eventually, he finds a new romantic interest in struggling actress Julie (Farmiga), which naturally leads him to question his illegal goal. The story builds to a farcical conclusion in which Reeves, masked by a false beard, confronts Farmiga onstage and ad libs a new finale to Anton Chekhov’s “The Cherry Orchard.”

Enjoyably lighthearted and marked by comedic wordplay reminiscent of early Hal Hartley, “Henry’s Crime” sports a vintage Reeves performance, displaying his deadpan talents in constant close-ups. It makes sense, then, that the actor played a key role in bring it to fruition. The movie represents the first completed feature from Company Films, the production company that Reeves launched with Stephen Hamel nearly a decade ago. As a first-time producer, Reeves said he went to “the Lemore Syvan film school,” crediting the “Henry’s Crime” co-producer whose previous credits include “The Ballad of Jack and Rose” and “The Private Lives of Pippa Lee.”

If Reeves was a disciple of the indie world, he did his homework. During a roving half hour conversation with indieWIRE on Sunday, the actor struck an inspiring tone when discussing his intention of getting “Henry’s Crime” seen. “Right now, we’re in the battle of trying to get domestic distribution,” he said. “In this changing economy, a lot of traditional routes have been constricted.” Having left the Toronto International Film Festival without securing a theatrical release for the movie, which cost under $10 million to produce, Reeves said at one point he considered releasing it himself.

“That ran across my mind,” he said. “But in order to do that, with the cost of the infrastructure, you always want someone who has experience.” He referenced the speech delivered the night before by FilmDistrict president Bob Berney, the winner of Woodstock’s Maverick Award. “It’s like what he said about being the messenger for a movie,” Reeves explained. “We need to hire someone to be our Bob Berney to get this kind of film to exhibitors.” (Syvan said they’re hoping for a March release date.)

Meanwhile, Company Films has several projects on the burner, including a screenplay titled “Bloom” written by Mark Andrus, with Scott Ellis attached to direct. He’s also developing the science fiction feature “Passengers,” in which Reeves plays the only person awake on a spacecraft containing 500 passengers — until his character chooses to wake up a woman. According to Reeves, “Passengers” represents a different kind of production hurdle. “It’s a $60 million dark romance,” he said. “It’s hard to raise that kind of dough.”

Additionally, he hopes to find time to make his directorial debut with a project tentatively “Man of Tai Chi,” with the assistance of “The Matrix” fight choreographer Tiger Chen. Reeves intends to shoot the movie in Mandarin, although he’ll play an English-speaking villain named Domico who convinces a poor young man to get involved in underground fighting.

Despite his indie efforts, Reeves still has Hollywood on his side. He plans to act in the Universal-produced samurai story “47 Ronin” next year, and spoke excitedly about the prospects of a long-awaited third installment in the “Bill and Ted” franchise. “People want me to do another one, and I think the script is worthwhile,” Reeves said. “It’s about these older guys, these positivists, who are always going against the forces of control — whether it’s the dad, the school system, time or god.” The latest version of the sequel calls upon their musical talent to save the world. “These guys are almost fifty now and trying to write the perfect song,” he explained. “They’ve neglected their children, they’ve neglected everything. They have this messianic outlook. It’s going to have to be profound in order to get made.” 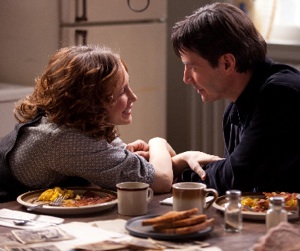 Regardless of his dense schedule, Reeves insisted he would stay on board to ensure “Henry’s Crime” gets noticed. “I’ll promote it,” he said. “I’ll make time.” Of course, his presence at Woodstock represented a part of that feat. When “Henry’s Crime” premiered at Toronto, much of its exposure was buried by major awards season fare, and Reeves’s press conference was an infamously aimless affair.

At Woodstock, the movie played to enthusiastic crowds, and its identity seemed to sync with many of the small scale projects dominating the program. Woodstock’s narrative feature award winner, the gently moving British production “Stranger Things” (directed by Eleanor Burke and Ron Eyal), follows a lonely woman coping with the death of her mother and forming an unlikely bond with the homeless man she discovers squatting in her dead parent’s home. Although quieter and more somber than “Henry’s Crime,” both movies epitomize the desire to tell an entirely unpredictable story without sacrificing the underlying romantic appeal of the narrative.

If it only takes one degree to connect Keanu Reeves with an ultra-low budget indie, it took even less to connect him with Woodstock’s audience. After the first screening of “Henry’s Crime,” the actor engaged in a highly amusing Q&A, happily fielding off-the-wall questions about “Point Break” and Jack Nicholson. (The biggest laughs came from an anecdote about Nicholson’s tendency to drink a lot of water before scenes where he has to cry.)

Safely hidden from the prying lens of paparazzi, Woodstock allowed Reeves to reflect on his career without the pressures of a mass audience. Asked about IMDb’s description of him as “one of the most inscrutable actors to ever hit it big,” he took an analytical approach. “That makes me feel like they must understand something about my characters,” he said. “In terms of mainstream Hollywood studio pictures — “Speed,” “Point Break,” the “Matrix” films, or even “Constantine” — I don’t really feel like those are inscrutable, but they have a strong interior life. These characters are on very internal journeys.”

Reeves said he appreciated hearing from fans at Q&As and on the street. “Obviously, you want to have your privacy, but in terms of meeting folks and saying hi, for the most part it’s a good experience,” he said. “When people seem to enjoy your work and your films, that’s easy.” Woodstock’s winning filmmakers would almost certainly agree.

This Article is related to: Features and tagged Henry's Crime, Interviews