SFIFF '11 | Christine Vachon: "The State of Cinema is not necessarily taking place in a cinema" 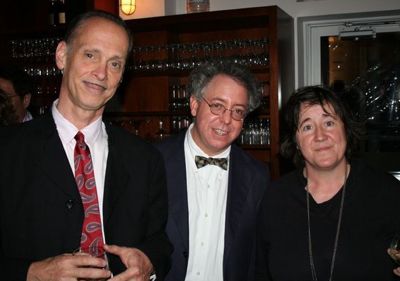 Veteran producer Christine Vachon gave her thoughts on the art and business of filmmaking over the weekend at the 54th San Francisco International Film Festival. The talk, dubbed “The State of Cinema Address,” covered a number of areas, including the creation, distribution and definition of independent film. With well over 60 titles to her credit, Vachon noted that both the business and creation of independent film have had several cycles during her two and a half decade career, though the industry continues to fear evolution.

“I’ve produced over 60 films which is unreal. The important part of that is that I’ve seen independent film die and be re-born at least three or four times. When it does, it reminds me how terrified we are of change – how terrified the film business is of change.”

During her twenty minute speech, which was then followed up with an audience Q&A, Vachon said that she began her career by identifying under served audiences and making and marketing film directly to them. She also touched upon how the whole filmmaking process continues to change with evolving consumption habits and platforms.

“We are now in a new place of trying to figure out who we are making movies for and are the ways we are consuming media actually changing the kind of stories we’re telling? And if so, how are we reaching out to those audiences that we hope will want to celebrate and enjoy the kind of films – media – that we’re making.” Vachon shared that she recently signed a contract on a new project that includes a specified number of Tweets and Facebook posts that she and others in the production will be required to do per week, an example of the direct relationship filmmakers have with their potential audiences. She also related today’s state of independent film with the past, noting that DIY filmmaking was born out of a sense that traditional movie making lacked the kind of content particular audiences were seeking.

“When I started at that time there (20 – 25 years ago), there were extremely experimental films and there were Hollywood films, but there wasn’t a whole lot in between. And [there was a] notion of a film culture that needed production and telling stories but wasn’t super Hollywood and not super anti-narrative experimental films, which was really was it. Then I started to see filmmakers like Jim Jarmusch, and Betty Gordon, Coen Brothers – and started to realize there was this whole other kind of cinema – Spike Lee also. I realized people were starting to make movies and not asking permission to make them. They said, ‘I’m not seeing what I want to see. I’m not seeing my life reflected up there…so I’m going to take matters into my own hands.’ And one of the things that’s very exciting to me right now is, I feel like that’s what filmmakers are doing again. But they’re doing it not necessarily in a theater near you. A lot of it is happening on YouTube, a lot of it is happening in platforms I couldn’t imagine back then…”

Adding further about film’s evolution, Vachon added, “The state of cinema is not necessarily taking place in a cinema.”

Relating to her recent experience with the Todd Haynes-directed miniseries, “Mildred Pierce,” starring Kate Winslet, Vachon noted that television allows for risk taking. “TV is so much less risk averse than cinema in so many ways. A lot of young filmmakers grew up with fantastic television, I didn’t… [Back then], TV was supposed to be the low-brow alternative when I grew up – it wasn’t supposed to be good. In the last 20 years – with HBO leading the call – TV has become absolutely amazing, and that has attracted filmmakers. That kind of risky content is what has excited people. I started to think that we should look at the way people are consuming media and that will affect the stories we tell.” Vachon also said it was “amazing” that they had finished “Pierce” and it was playing on television the following day, adding, “And that absolutely isn’t what we go through in the movies.”

“If [someone] said five years ago Todd Haynes would do a long form miniseries for HBO, people would have said, ‘Why would he do that? That’s a come down’… And that’s a real sign to me of changing times. And I think it’s changing times ultimately in a good way. We’re being forced to be budget agnostic, format agnostic, content agnostic and platform agnostic. And I think that’s exciting… On Netflix, my movies are going up against all the great movies of the past 25 years.”

Despite changing habits surrounding media consumption, Vachon did not express a “sky is falling” prognosis on the traditional theatrical experience, saying “I don’t think theatrical movies are going anywhere soon.” She noted that having a big screen experience cannot be easily replicated and that will sustain that form of distribution into the future.

“Theatrically seeing a movie with a group of people and having a collective experience has an authenticity that you can’t get with your big screen television. So I think it will stick around.”

Beyond the business of film, she turned to the creation of the art form, saying that she was excited about how technology has allowed filmmaking to become much easier and cheaper.

“It is super exciting to me that it’s so much easier to make a professional looking film these days,” said Vachon. “Back when I was making ‘Poison,’ $100,000 didn’t get you much. Now with these new cameras, you can make extraordinary movies for half that or a quarter of that. And now you don’t have to wait for permission from a distributor. It gives filmmakers an even more direct relationship with their audience ultimately in a good way because that relationship of going back and forth really helps – ultimately it makes filmmakers understand who they’re making their work for, which is something that went further and further away from us as we’ve been making movies that can crack bigger distribution systems.”

As she closed out the speech part of the program, Vachon tackled the very definition of independent film today, saying that she is often conflicted by what that means, but said that at the end of the day, a filmmaker’s vision and authenticity is what defines an independent film.

This Article is related to: Toolkit and tagged distribution, Toolkit