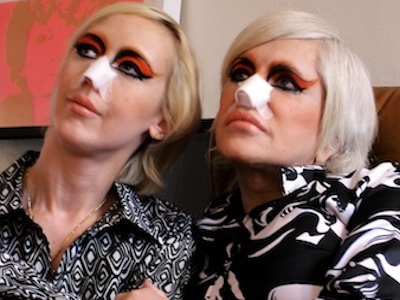 Why She’s On Our Radar: After making over a dozen experimental shorts, Losier made her feature film debut with the doc “The Ballad of Genesis and Lady Jaye.” The film debuted at the Berlinale earlier this year (where it won a Teddy Award for best documentary) and is currently making at stop at Hot Docs in Toronto (it also recently screened in SXSW, Tribeca and San Francisco). “The Ballad” is an intensely affecting portrait of the relationship between Genesis P-Orridge, one of the most influential figures in underground industrial music, and his collaborator and muse, the late Lady Jaye. The film centers around the sexual transformations the pair underwent for their ‘Pandrogyne’ project (in which they underwent surgeries to more closely resemble each other).

More About Her: Losier didn’t study film. She studied literature in France “while skipping out of classes a lot to go see films ‘rue des Ecoles’ all the time.” But since she was a child, Losier was “obsessed with old black-and-white films from the 1930s,” as well as westerns and musical comedies. So when she received a grant to write a PhD, she took the money to do “research” in New York but instead used it to stay in the city and make art. “Then I did a Master of Fine Arts in painting at Hunter,” she said, “in which I skipped classes to go see films… and ended up working for Richard Foreman doing props for his play Hotel Fuck, Paradise Hotel, which changed my life. I discovered the experimental world of theater, cinema and music and it was the beginning of a big adventure for me… I ended up at Millennium Workshop in the East Village to see a film and met this wonderful older beautiful man with a very clumsy walk who was eating gallons of ice cream… It was Mike Kuchar! I became his close friend, eating ice cream in return and performing in his films, and that is when he showed me how to use the Bolex a boyfriend had just given me. I made my first film on Mike Kuchar, ‘Bird, Bath and Beyond’… and voila, the beginning of my filmmaking!”

What’s Next: Losier is currently working a couple of music videos with April March, Genesis and Marisol. “At some point I’d like to challenge myself again by finally making a fiction film,” she said, “and that would be of course with music and cowboys on donkeys!”

indieWIRE Asks: How did you get involved in “The Ballad of Genesis and Lady Jaye”?

My story with Genesis P-Orridge begins three years ago with a typically miraculous New York City coincidence. I had just seen Genesis perform with her band Thee Majesty at the Knitting Factory, along with Alan Vega, who gave a memorably awful performance by fondling his balls and grunting sex to an ’80s beat. Genesis, on the other hand, was pure enlightenment to me. Chanting half-sung, half-spoken lyrics of deep poetic meaning in a primal – at times scary – voice, she somehow maintained an aura of delicacy and softness, as her giant breasts floated, half naked above the crowd. I was completely hypnotized by her, never having seen anything like her, and I knew then that I had to find a way to meet her and film her.

A week later, New York City took care of it. I was at a gallery opening in Soho, one of those sardine-can spaces where you can barely walk and breathe. I got pressed into a corner and stepped on someone’s toes. I turned to apologize and there she was, talking with Bjork and smiling, her golden teeth glittering in my eyes. We spoke only briefly, but something special passed between us and she gave me her email and asked me about my films. So I guess you can say that fate – or clumsiness – stepped in and opened a very special door of friendship and filmmaking. 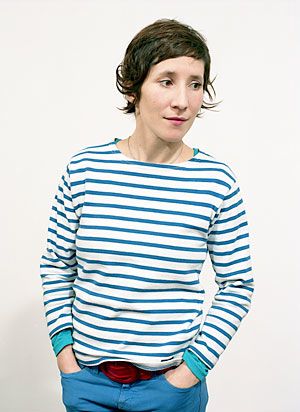 We emailed each other for a while, exchanging details of our lives. She’d invite me to her concerts, and one day I found myself in her house, sitting on a giant plastic green garden chair in the shape of a hand. There appeared Lady Jaye, his/her wife, strikingly beautiful with a strong posture and a directness that was so inviting and intimidating. After a short talk about my work, Jaye pointed to me and said to Genesis, “She is the one.” I had no idea what it meant, but she explained they had been looking for the right person to film their life and love and I was the one. So I didn’t question it and let life take me on the next adventure and a few weeks later I was on tour with the band! It was the beginning of seven years of filming and a very beautiful and deep friendship that continues today as the film is finished.

What made you decide to get into documentary filmmaking after a career working in more experimental veins?

Most of my short experimental films are often film portraits in the same manner the feature film, is so it was a challenge to try make a longer portrait and keep my style, push the story and create a more narrative film with the same experimental technique I use: non-synch sound, three-minute rolls of film, 16mm shot on old hand-crank Bolex, and seven years to make it… so to me, the feature is still very experimental in its form and not a classical documentary at all.

Had you heard of Genesis & Lady Jaye prior to taking on the project?

Absolutely nothing and that is always best for me, to just know nothing and not be a fan so I can become a friend and our relationship grows beautifully with the film and time and discovery. It enables me to film in a genuine, fresh manner with no preconceived ideas and concept and it allows me to be totally free.

What was one of the most challenging aspects of making this film?

It was very hard for me to work full time and make this film at the same time, I had no budget and did it all alone with camera work, sound recording, costume design, editing… very intense. I had to be very disciplined, stubborn and find faith while the love was intense and Jaye died, and I had no idea where the film was going… but I had faith inside and much love.

What do you hope people take from this film?

Maybe feel as moved as I did and go through a real ballad through an unusual life in music and whimsicality.

This Article is related to: Festivals and tagged Features, Futures, Interviews