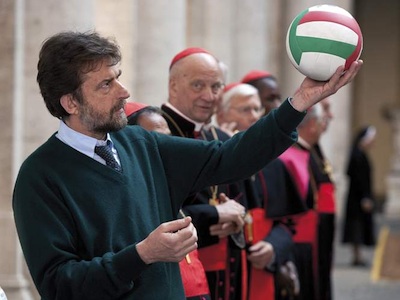 Editor’s Note: This review was originally published during the Cannes Film Festival. “Habemus Papam” opens in limited release on Friday.

“Habemus Papam” (“We Have a Pope”) is stuck somewhere between religious satire and an earnest look at a crisis of faith. Italian director Nanni Moretti, winner of the Palme d’Or for 2001’s “The Son’s Room,” delivers the leisurely story of a would-be pope without settling on the right method for telling it. Intermittently amusing, the movie never digs deep enough to justify its philosophical connotations, and lacks enough comic inspiration to sustain its lighter ingredients.

Built around an impressively subdued performance by Michel Piccoli, “Habemus Papam” contains an intriguing premise. It opens with the Pope’s funeral, a bleak public affair that takes an amusing turn when a local journalist abruptly begins narrating the scene, wondering aloud which of the passing Cardinals could land the top spot. Cut to the secret proceedings in the Sistine Chapel, where an intense voting process quickly leads to a verdict. Moretti announces his playful intensions by foregrounding the Cardinals’ internal monologues, as they each express a desire to evade papal responsibilities. Everyone lucks out save for Piccoli’s sullen character, who bails on his initial responsibility to address the gathered masses in St. Peter’s Square and retreats to his chambers in fright.

With the media unaware of the drama behind the scenes, the Vatican scrambles to convince their new leader to accept his responsibility. Moretti cleverly underlines the gap between faith and practicality when the pope’s minions hire a secular therapist (Moretti himself) to advise the pope, but refuse to let him ask private questions. Fed up with the pressure, the pope escapes the Vatican and hides among the masses. The set-up has enough momentum to give the impression that Moretti is gearing up for a clever follow-through.

But the individual strands drift apart and never come back together. Piccoli’s character wanders around, befriends an actor and rejuvenates his initial interest in theater. Moretti’s shrink – forced to stay within the Vatican walls to keep the situation under wraps – passes time by gathering the Cardinals for a volleyball tournament. None of them realize the Pope’s absence, another plot detail that demonstrates Moretti’s indictment of religious bureaucracy. He portrays the Cardinals as a group of wizened Keystone Kops, stumbling through their spiritual duties while keeping an eye on cell phones and attempting to steal away to the museum. Unfortunately, this is all more amusing to think about than to watch. Moretti never delivers enough energy to make these ideas pop; instead, they slowly dwindle.

Piccoli and Moretti both deliver tolerable performances, but the screenplay lacks a means of pulling them together. Moretti’s meandering story fails to arrive at a specific takeaway for its irreverent premise and instead continually dwells on the Pope’s unwillingness to face the task forced on him. He expresses deep regret for the missed opportunities of his youth, and lacks any measurable amount of self-confidence. “God sees abilities in me I don’t have,” he says, but Piccoli’s abilities as an actor are really the only assured aspect of this humdrum tale.

HOW WILL IT PLAY? Sundance Selects releases “Habemus Papam” in limited release this week. While Moretti is an established filmmaker in Europe, his U.S. following is relatively tame. The movie is likely to struggle at the box office but may find a more welcome response on VOD.

Watch the trailer for “Habemus Papam” below:

This Article is related to: Festivals and tagged Cannes Film Festival, Habemus Papam (We Have A Pope), Reviews