INTERVIEW | "If a Tree Falls"'s Marshall Curry: "This movie has a point of view. It’s complex."

Marshall Curry’s (“Street Fight,” “Racing Dreams”) latest documentary, “If a Tree Falls: A Story of the Earth Liberation Front,” tells the story behind what the FBI has deemed America’s “number one domestic terrorism threat” — the radical environmentalist group, the Earth Liberation Front (ELF). In 2005, Daniel McGowan was arrested by the FBI in a nationwide sweep of the activist organization. Curry (and co-director Sam Cullman) use his arrest as a springboard to launch into what led him to join the group and the reasoning behind their extreme actions.

The story they weave together is a complex one; one that’s been forcing people to examine what constitutes a ‘domestic terrorist,’ since its world premiere at the Sundance Film Festival where it won an award. The film opens in limited release through Oscilloscope Laboratories this Wednesday, June 22. indieWIRE caught up with Marshall to discuss how he pulled it all off.

So you knew Daniel prior to shooting right? The subject sort of landed in your lap.

I didn’t know him well but he worked for my wife – that was our introduction. She came home from work and said, “Guess what happened. Four federal agents arrested that guy, Daniel.” I had no idea about his past at all. When reality cuts against stereotype…that’s what interests me. He’s a guy who would never come to my mind when I think ‘domestic terrorist.’ That was kind of the question that drove the movie.

Why did he not seem to be that ‘type’ when you first met him?

Well, he grew up in Rockaway, Queens. His dad’s a cop. He was business major in college. He never spent a lot of time outdoors until his 20s. He doesn’t look like a radical. He’s not a tattooed, deadlocked guy. He seems very regular on his surface. And yet he’s facing life in prison for domestic terrorism.

Did you know instantly that you had a movie when your wife walked in and told you what had happened?

It came to me over the course of a few weeks. When he was first arrested they took him away. It was weeks before his sister was able to get him out on bail. She put up everything she owned in order to get him out. So by the time he was released, which was some time after the arrest, Sam Cullman, who shot the movie and is co-director, he and I just said, “This is going to be an interesting story.” At the time Daniel was saying he was innocent. Either it’s the story of an activist wrongly targeted by the government or the story of an unlikely eco-terrorist.

Is that why the film was originally conceived as a short?

I wasn’t sure how rich it would be. I think most documentaries are too long. But as we started digging, it just became more and more interesting. Each of the characters surprised me. There are some topics for documentaries that on the surface seem really great. Then you start digging and things are what you expect. In this case, it was the opposite. That is the goal in a documentary: to have those moments of surprise.

I was amazed you were able to cut it down to a relatively short running time given the span of the story. You spent, what four years making it?

Part of the four years was fund raising, part was editing and part was making “Racing Dreams” at the same time. Once Daniel went to prison, we put this on ice. As soon we finished “Racing Dreams,” we edited this for about a year-and-a-half. Access took us a lot of time. A lot of the interviews came after, in the year or two after Daniel went to prison. It was necessary to let things settle down before the government would speak to us. They didn’t want to jeopardize their cases.

How did you gain that kind of access, namely the trust of your many subjects? 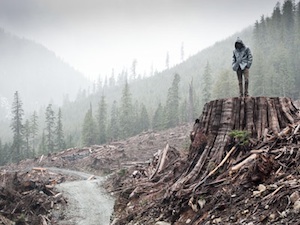 Just through a lot of conversations. In some cases, like with the owner of the timber company, he said no. He just imagined that we were going to be this New York, kind of liberal documentary company out to make him look bad. I just had to explain to him that that wasn’t what I was interested in doing. The film was not going to be his point of view, but it was going to include his point of view. By being direct, he got a sense that he could understand us. Once we got a couple of interviews, people would vouch.

The finished film seems fairly objective to me in many ways. Would you agree?

I think that everything has a point of view, whether it’s The New York Times or CNN. This movie has a point of view. It’s complex. It reflects the way our team really sees this story. It is complex not because I have some slavish obedience to ‘he said, she said’ journalism. In fact that sort of journalism drives me crazy…where people won’t take an opinion. When things are complex, there’s a responsibility to explore the complexity. In this case, I think it’s a complex story. So that’s why the movie is complex. But I do think it has a strong point of view. There are some people who will set up straw men just to knock them down. That wasn’t what interested us in this process. We wanted to let people’s strongest arguments bang up against one another. That’s when the sparks fly.

How did both sides react when they saw the film?

I was nervous. People are surprising when you show them movies of themselves. They all have said it’s an accurate and important story. Daniel hasn’t been able to see it; he’s in prison. But his family has seen it. They thought it expressed their point of view and challenged their point of view, in a way that will stretch the movie. We talk of the movie as a cautionary tale for activists to think about the ethics, what’s effective and the legal ramifications of what they do; and also a cautionary tale for the government to think about activism and how to properly respond to it.

So you sought to make both sides of the argument find a sort of common ground?

Common ground might not even be right. To stretch people out of their comfort zone…to nudge people. It’s kind of the same thing I wanted to do with “Street Fight” and “Racing Dreams.” With “Street Fight,” it took an urban mayoral election and found lots of complexity in there. The same with “Racing Dreams.” I wanted to show complexity within this world that most documentary people don’t know anything about.

Speaking of “Racing Dreams,” DreamWorks bought the rights are are planning to make a feature fiction film out of the material. How involved are you with the adaptation?

At this point they’re just writing it. What I hear is that it’s going well. I’m an executive producer. I imagine once they have a draft I’ll be involved at some arm’s length.

Were you surprised when they approached you?

I mean, I think that movie plays like a fiction film. When I’m making documentaries I think a lot about how fiction films play. I want them to have the pacing, the twists and the character development of fiction films. So all the time when I’m editing we would say, “Okay, if this were a fiction film what would happen here.” And then you’d say, “Well, okay I have a scene that would do that.”

Given that, would you ever consider directing a fiction narrative?

Maybe. I’m not one of those people who sees documentaries as a stepping stone to doing fiction. I love documentaries and watch tons of documentaries. But, I like fiction films a lot too. I’ve been thinking a little about a project…we’ll see.

Any hints you can give us?

This Article is related to: Features and tagged If a Tree Falls: A Story of the Earth Liberation Front, Interviews