It’s not always about length… enjoy some quality shorts this summer! The 2011 Palm Springs International ShortFest, Short Film Festival & Film Market announced today its roster of 331 films, selected from more than 3,000 worldwide entries. Now in its 17th year, ShortFest will showcase 64 World Premieres, 58 North American Premieres and 25 U.S. Premieres. The selection of films for screening and competition features star-studded casts and award-winning films from 50 countries around the world. All selections are structured into 52 themed programs, which will screen June 21-27, at the Camelot Theatres in Palm Springs; all Festival submissions will be available in the ShortFest Market. See attached or visit www.psfilmfest.org for a complete list of film programs.

“It’s a watershed year for ShortFest,” said festival Director Darryl Macdonald, “encompassing our first foray into the world of online short film streaming, an expanded lineup of international participants and new sponsors like Persol and The Pipeline in the mix. I’m particularly excited about the inclusion in our lineup of a wealth of striking new filmmaking talent emerging from the Middle East, South America and a number of Asian countries. Beyond that, the extensive number of high-visibility talents showcased in this year’s ShortFest films provide vivid testament to the increasing vitality and viability of the short film art form.” 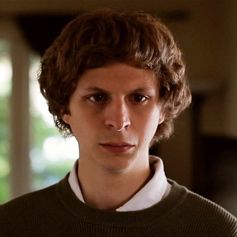 Michael Cera in “Bad Dads.” Image courtesy of the festival.

“We are thrilled to see the increase this year in films from around the globe,” said ShortFest Film Curator/Director of Industry Programming Kathleen McInnis. “We have a number of new countries represented, by films such as Bekas, the Student Academy Award winner from Iraq/Sweden; Red Umbrella from Indonesia, and Salar from Bolivia, totaling 50 countries in all. This bounty of international storytelling translates to an explosion in quality filmmaking available to our industry and filmmaker guests in our PSSF Film Market, where we will have nearly 3,000 titles for screening.”

Allison Anders (Director – Border Radio, Gas Food Lodging, Mi Vida Loca), Effie T. Brown (Producer – Real Women Have Curves, Rocket Science) and Kirsten Smith (Producer/Writer – Legally Blonde, 10 Things I Hate About You, The House Bunny) will serve on the ShortFest jury. A total of $118,800 in prizes, including $14,000 in cash awards, will be given out in 18 categories to this year’s short films in competition. The Panavision Grand Jury Award winner will receive a digital or film camera package valued at $60,000. First place winners in four categories will automatically become eligible for consideration by the Academy of Motion Picture Arts and Sciences (AMPAS) for a possible Academy Award nomination. Over the course of its first 16 years, the Festival has presented 80 films that have gone on to receive Academy Award nominations. Winners will be announced on Sunday, June 26 at a Closing Night screening and reception.

The Opening Night screening, on Tuesday, June 21 at 6:30 p.m., will be highlighted by live-action short comedies in a program titled “Make ‘em Laugh.” Throughout the Festival the selected short films are organized into 52 programs covering a variety of genres – including action, comedies, dramas, horror stories, thrillers, mysteries, and even a 3-D short – and themes such as animals, art, communication, crime, dreams, family, future worlds, love, memories, siblings, sins, travel, work, GLBT shorts, shorts from Australia, the Middle East and French Language shorts.

Prominent industry figures will lead three days of panels, workshops and meetings, discussing trends, new technologies and emerging paradigms in film funding, production, distribution and exhibition. Friday, June 24, is “Examining Key Elements of Visual Storytelling”, with panels on cinematography and its shifting technologies; the politics and business of story, and outside-the-box film funding. Saturday, June 25 and Sunday, June 26 are “Expand Your Network Days” with interactive panels, meetings, discussions and a brunch with festival programmers, top film journalists and major agents, managers and producers.

Designated by AMPAS as an award-qualifying festival, and accredited by the International Short Film Conference, the Palm Springs International ShortFest and its Short Film Market are the largest and most prominent short film showcase in North America. The Festival and its concurrent 3,000-film Market continue to serve as a scouting ground for new filmmaking talent and are well attended by those in the business of buying and selling short films.

The Palm Springs International ShortFest is supported by an ever-growing number of new and longtime sponsors with local, national and international prominence. The Title Sponsor is the City of Palm Springs with Presenting Sponsors The Desert Sun and Spencer’s. Major Sponsors include Persol, MAKE, Panavision, The BottomLine, Greenhouse Studios, KPSP Local 2, The Pipeline, Australian Consulate General in Los Angeles and Palm Springs Life. The official host hotel and media center is the Renaissance Palm Springs. More information is available online at www.psfilmfest.org or by calling (800) 898-7256.

This Article is related to: News and tagged Festivals, Shorts