"The Room" Director Tommy Wiseau Says a Sitcom and a Vampire Movie are Next: The Interview, Part 2 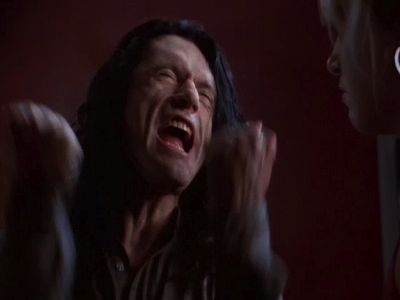 Here’s the conclusion of our interview with Tommy Wiseau, director, writer and star of cult classic “The Room.”

This weekend, Wiseau heads to the AFI Silver Theater in Washington, DC for two midnight screenings of “The Room,” which will include a live staging of the film, featuring “never-before-seen scenes and characters.”
Click here for part 1.

Any more stories from “The Room” midnight screenings?

I have dozens of stories. They want me to drink, they want me to do this or that. We play football. We always have a groovy time. I haven’t had one bad screening in my entire eight years screening “The Room.”

How long do you foresee these screenings going on? And how long will you continue touring with them?

Right now we’re fully booked for this year, but next year we have another tour. It’s called “‘The Room’ Blu-ray Tour.” We’ll be releasing “The Room” on Blu-ray and we’ll be promoting that. At the same time, and you can stress this, I encourage everyone to see it in the theater first. It’s the best way to see it. I always say, ‘You can laugh, you can cry, you can express yourself, but please don’t hurt each other.'”

What have you learned from all these screenings and experiences? Both as a filmmaker and as a person?

Well, I’ve learned a lot. About people, culture. And about “The Room” as entertainment. I don’t want to be self-centered, but I guess I was right. You see, if I had produced the way they want me to produce in Hollywood… Which again, I am very respectful of those people. I’ve worked with lots of people in Hollywood and I am respectful of any kind of project. But the fact is that “The Room” is a different cookie cutter than Hollywood. It’s much different than a regular movie. You probably know this, since you saw it. Again, nothing happened by accident. No. Keep in mind, 600 pages had already been written prior to the movie. What I decided to do is that I wanted to put as much perplexity [sic] and symbolism within “The Room” so audiences would say, “what is this about?” It’s that consistency from the beginning to the end of the film. How I tackle different issues relating to relationships? Two’s better than three, but three’s a crowd. But three is okay too, you know?

But it’s questionable. Is it okay to betray someone? Your friend? And again, it doesn’t matter who you are. He, she, they, whatever. It’s okay to love someone. “The Room” was designed for American people, but we have a great fan base in the entire world and I’m very happy. I didn’t expect it, if you ask me. I’m a very simple guy. So you know, I didn’t know this would happen. I like how people seem to really, really enjoy the film. It’s not like you force it on them. I did my job well, you know what I’m saying?

So whatever negative things mainstream media said… They didn’t get it at that time. But little by little people learned about it, anyway. I like the way you ask questions. You’re very straightforward and ask about the movie and my experiences. That’s how it’s supposed to be. People don’t understand, for example, technical aspects of “The Room.” That I shot it in two formats: HD and 35mm. What you see in the theater is a 35mm format. Why? Because it’s better, etc, etc. But I still shot it on both formats. It’s not just because I said so. It’s because every time in Hollywood, they didn’t want anything in HD, for your information. That’s a fact. When you go way, way back you can see certain data that explains that Hollywood is afraid. Again, the system was set up on 35mm. Keep in mind, by now we convert some of the classic movies to HD. But the fact is fact. Film is the film. You know? You cannot change that. I don’t care how much you improve the technology that you have today. A lot of people are shooting on HD, as you know. It seems to me we can use technology for art. But it’s very expensive. That’s another aspect that people don’t realize. I don’t care who you are, you will still spend money. I don’t care what camera you use. You know, you can use your iPhone and shoot some scenes. But the fact is you can’t bring it to 35mm because it’s grainy, etc, etc. I always encourage people and say before you do something, please do research first. That’s about directing and acting and anything you do. Anyway, continue, move on [laughs]…

Well, how about a question that’s not about “The Room”? What else have you been up to, and where do you want to go as a filmmaker and an artist from here?

Right now I’m working on “The Neighbors.” It’s a sitcom for TV.

Actually, no. For Comedy Central, I completed something called “The House That Drips Blood on Alex.” But right now I’m working with someone else. I can’t tell you the name of the network because they told me not to tell.

But the fact is that they’ll be releasing 15 episodes. And we’ll actually be doing theatrical release as well. A lot of people want to see it so we’ll be showing both in theaters and on TV. That will be a sitcom. Then I’m working on a vampire movie, as well as a movie that relates to the economy of America. I hope everybody will like it. With the vampire movie, I know one thing. If you see my vampire movie you will probably not sleep for two weeks.

When do you think these projects will all come out?

With “The Neighbours,” we will have the first episode within two months and then we will be continuing shooting one episode a month. Then with the economy movie, we want to submit to the Academy Awards so probably September or October and the vampire movie I’m working on. So it will probably be later this year. And for your information we are releasing “The Room” on Blu-ray at the end of this year, as I mentioned.

Great. I look forward to all of it.

Sure. No problem! And then I’m working with someone doing “The Tommy Wiseau Show” and also some other projects. I’m extremely busy. And then I travel too, as I mentioned.

I don’t know how you do it.

Good! Okay, thank you very much and I want to say thank you to all your readers. Is this your website’s first article on “The Room”?

I’m not actually sure. But it’s definitely the first in a few years.

People like to hear and I encourage you to attend any screenings and interview some of the fans. It’s just a suggestion.

Because some of those fans are really crazy [laughs!]

This is part 2 of a two-part interview, the first of which is available here.