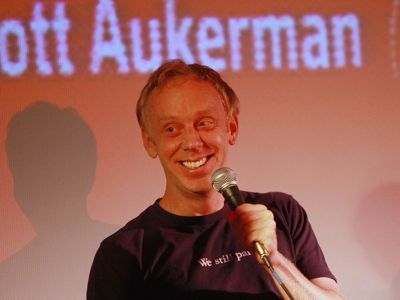 For its second annual ShortsLab: LA, the Sundance Institute put the emphasis on comedy. The result was a day packed full of expert tips invaluable to anyone interested the delicate art of making people laugh.

Trevor Groth, Director of Programming for the Sundance Film Festival, began the day on a humorous note by joking that most people associate the festival with playing “dark heavy films about incest and other dark weird things, but really we have a rich history with comedy as well.” He cited a roster of comedy masters who began their career with shorts in the festival, including Wes Anderson, Louis CK, Spike Jones, David O Russell, Adam Shankman, Trey Parker and Matt Stone, Tamara Jenkins, and Jason Reitman.

Groth also went out of his way to praise comedy shorts exhibited online. He noted that the Sundance Film Festival actively embraces work found on the internet, and for the past two years the jury award-winning short has been a comedy with the Funny or Die imprint (“Drunk History” in 2010, and “Brick Novax Pt 1 and 2” in 2011).

The eight-hour lab covered such topics as creating a comedic premise, development of a unique voice, creating comedy through timing and structure, creative production techniques, working with actors, making an online hit, and finding what works for an audience.

With words of wisdom flying fast and furious, here are fifteen proclamations that rang out particularly strong during the ShortsLab dedicated to the craft of comedic short form filmmaking and exhibition.

2. “The comedy I like is more individual than premise-y. I like getting someone’s personal voice: communication from somebody of something they have to say, and it’s an individual expression.” – Mike White (“Year of the Dog”)

3. “Be ruthless with material. I feel a lot of comedies are self-indulgent. There’s a lot you can tighten up. If it doesn’t earn the right to be on the screen, cut it. As someone once said, ‘Brevity is the soul of wit.’ Keep it short.” – Ruben Fleischer (“Zombieland”)

4. “There’s nothing I like better than a 90 second running time.” – Scott Aukerman, producer of “Between Two Ferns” on ideal length for the Internet

5. “With our sketch shorts, we were very premise-based. One premise – explore it as easily and uniquely from as many surprising places as you can, and end it.” – The Derrick Comedy troop (Donald Glover, Dominic Dierkes, DC Pierson, Dan Eckman and Meggie McFadden)

6. “People are so quick to go to Crazytown in comedy if they aren’t confident in the underlying material: ‘Jazz it up! Say it in a funny voice!’ Be as real, as normal as you can. Anything else would be superfluous if it doesn’t serve the idea.” – The Derrick Comedy troop

7. “Picking something topical and attaching your comedic point of view, that will get attention. But if it’s not funny or you don’t believe it in, people can tell.” – Funny or Die executives

8. “Don’t underestimate the power of a good title, thumbnail, and tags.” – Funny or Die executives

9. “Filmmakers, tell a story and be funny – don’t try to make a reel. Directors come up with awesome shots, but it has nothing to do with the story. Just tell stories.” – Bobcat Goldthwait (“World’s Greatest Dad”)

10. “A cardinal sin is directors showing up knowing exactly what they want. There are so many variations on the way you can execute beats. Show up clear on what has to be accomplished, but be open.” – Actor Romany Malco (“The 40-Year-Old Virgin”)

11. “When we ‘speed through this take,’ it’s usually the funniest one.” – Actor Danny Pudi (“Community”)

12. “Comedy is a very vulnerable entity on set. It’s important not to get in the way of the comedy. I’m a comedy facilitator. I do my job and step back and let it happen.” – Director of Photography Michael Price (“Ugly Betty”)

13. “You can find the comedy on set and it’s working, but you can break it in editing. Comedy is fragile. It relies on timing and subtlety.” – Editor Kabir Akhtar (MTV Movie Awards)

14. “Never stop making things that you find funny. Weird as your idea is, if it comes from your heart, you’re not going to lose.” – Derek Waters (“Drunk History”)

15 “Keep making stuff and don’t be afraid to try your own thing. Find your voice and don’t try to mimic what’s out there. Eventually it will get recognized.” – Zellner Bros. (“Sasquatch Birth Journal 2”)

This Article is related to: Toolkit and tagged