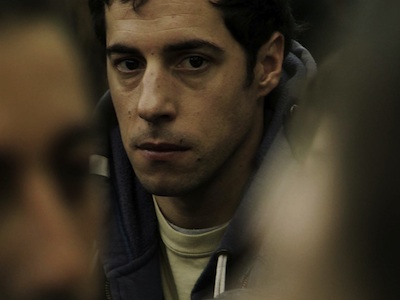 A speedy depiction of university politics and the spirited radicalism associated with them, “The Student” (“El estudiante”) announces 31-year-old Argentinean filmmaker Santiago Mitre as a South American Aaron Sorkin. A screenwriter whose credits include Pablo Trapero’s “Carancho” and “Leonera,” Mitre uses his directorial debut to craft a fascinatingly heady universe filled with moody young intellectuals and back-stabbing schemes. It might be the first serious political narrative about undergraduate matriculation.

The story revolves around Roque (Esteban Lamothe), a two-time college drop-out who returns to his Buenos Aires campus unsure what to do with his time. University life offers no shortage of opportunities for the disillusioned to waste their time, and Roque quickly starts wasting his days away with late night parties and bedroom trysts, bonding with the equally carefree Paula (Romina Paula), his best friend with benefits. But when Roque falls for the politically-charged assistant professor Valeria (Valeria Correa), his hidden passion for strategic planning comes out to play.

At first simply arm candy for Paula during a staff meeting about the upcoming election of the university dean, Roque confidently speaks up when the faculty resign themselves to supporting a candidate whose platforms no longer conform to their own values. Does Roque actually care who wins or simply enjoy the art of winning? It doesn’t matter: His enthusiasm captures the eye of the group’s elder statesman, faculty member Alberto Avecedo (Ricardo Felix), a former politician who enlists Roque in a grassroots protest of the election, eventually paving the way for Alberto himself to enter the race. The following weeks and months worth of events shift between Roque’s cunning ability to pave a smooth path for his new-found leader without sacrificing the socialist allegiances that helped him woo Paula in the first place. With its likable suave leading man always in danger of letting success get to his head, “The Student” develops into a universal parable about danger of self-confidence among the power-hungry elite.

One of the sharpest campaign movies since “Primary Colors,” Mitre’s story is almost entirely concerned with the electoral process as an abstract event. Supremely chatty and littered with specific references to Argentinian university culture bound to go unheard by anyone unfamiliar with them, “The Student” nevertheless has a clear-cut arc, which could be seen in its most basic sense as a version of the “Star Wars” mythology with Roque as an academic Anakin Skywalker. Drawn to the excitement of the race, he barely realizes that he has been coaxed into burning bridges until it’s too late.

Given that epic dimension, “The Student” is particularly impressive for the smallness of its design. Shot with a crew of six on a micro-budget, the movie never feels sloppy or aimless (although an occasional disinterested voice-over could have been excised). A dense middle section appears to mimic Roque’s subjectivity as his immersion in the campaign world reaches a fever pitch, but then the final third increases in clarity, sharply reflecting the character’s progression into a mature thinker.

Still, it’s easy to get the feeling of becoming lost in the details, but that’s what makes “The Student” incredibly engaging in the first place. When the elder Alberto advises Roque that “the secret is never to argue,” they have a good laugh. Arguments keep them in the game, even though they paradoxically doom them from the start. As the texture of “The Student” grows more crucial than its specificity, it shrewdly portrays youth activism in motion; that is, students who are never entirely certain of the meaning behind their cause, but utterly convinced that it matters.

HOW WILL IT PLAY? A big hit at the Buenos Aires Film Festival several months ago, “The Student” dropped off the industry’s radar until this week when it had its international premiere at the Locarno Film Festival. It should continue to garner strong notices at the Toronto International Film Festival next month and land a home with a midsized U.S. distributor, extending its audience beyond the Latin American market.

This Article is related to: Festivals and tagged Locarno International Film Festival, Reviews