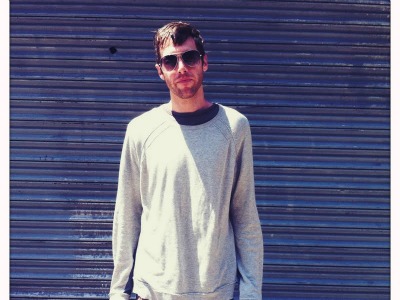 Courtney Fathom Sell is like a reincarnation of the young John Waters. Obsessed with making transgressive low-budget movies on Hi 8 and possessing little regard for societal norms (his company is Slumlord Productions), Sell embodies the DIY spirit taken to its sometime illogical extreme. And in it’s in that spirit that indieWIRE presents Sell’s Top 5 Slightly Illegal Tips For No-Budget Filmmakers.

Actually, that adverb is something of a misnomer; it’s pretty clear that some of these tips are entirely illegal and as such indieWIRE can’t advocate them. While this kind of dedication and creativity demands a certain admiration, these opinions are strictly those of the author.

Sell’s latest film, “The Hole,” will screen this Sunday at Brooklyn Grange through Rooftop Films, presented by IFC.

Let’s face it, making films is always better when you’re breaking rules, dodging bullets, and narrowly avoiding the police. As a no-budget filmmaker with nearly hundreds of completed projects under my belt, I can honestly say that if you want to make your movie, you should simply make your movie. Nothing, and I mean nothing should hold you back, even if it’s slightly illegal.

I have learned many ways to avoid being arrested, detained or even killed. I cannot promote the idea of putting others in danger; nor would I want you to get hurt or in trouble during the making of your film. So here’s some tips — not reasons to break the law –that will hopefully allow you to create your project in the most independent fashion.

I’m not saying that you need to go out and hijack a RED; I’ve shot almost all of my work on a Hi 8 video camera and occasionally a cell phone. But if you’re going to use the equipment you’ve somehow ‘obtained’ to make your films, you have already paid and in my eyes, the only crime is letting that camera go unused.

Though borrowing is probably the best, most efficient way to go about this, there is certainly no problem with a little begging or lying to get what you need. To me, begging shows initiative and lying shows heart. If you happen to be in film school, make sure to befriend the equipment rental students. Though I refuse to share names, I do know many filmmakers who have utilized their school’s equipment long after they either graduated or dropped out. However, if you are going to be so bold, please obey the no-budget filmmakers’ golden rule: Make sure you put the equipment to good use!

2. Who cares about shooting permits?

The idea of getting a shooting permit for a no-budget, small crew project is ridiculous to me and as long as you’re not holding up traffic or hurting anybody, who cares?

Still, this one is tricky; it can lead to lawsuits if you don’t go about it in the right way. When it comes down to shooting a scene on the street, I just go out and shoot it. If you are accosted by the police seeking some form of permit, either be a great talker or have forge a reasonable-looking fake document that you can flash at them before you get back to work. If you are told to leave and it doesn’t look like there’s a way out, simply continue rolling the camera and get your scene anyways! Just be sure you’re wearing good running shoes.

A great example of this was done by a close friend of mine who needed shots of his main subject portraying a bank robber being arrested by the police. He figured that if his actors made a minor commotion, he would be able to get the shots he needed — and without paying the city or the police for their cameos. He directed his subject to begin acting up on a sidewalk in the Financial District during the lunch rush; happily, the actor was immediately accosted by the big boys in blue. They were so involved in figuring out what was going on that they completely ignored the camera set across the street. Not only did he get the scenes he needed, but the cops dismissed the disturbance as the antics of just another drunk and told him to leave the area.

Another, simpler method is to dress like tourists and pretend you don’t speak English. They may leave you alone if you act confused.

3. Promotion to catch their attention!

For no budget filmmakers, promotion can be the hardest struggles. Either the press has never heard of you, or they don’t care about your film, or you’ve pissed off one too many people while making your masterpiece and created a lot of enemies who have vowed to never help you out.

My favorite form of raising promotion is raising controversy. It’s easier to receive attention by shocking the public than by handing out dull flyers that will likely end up in the trash. I appreciate the idea of ‘flyering’ ever telephone pole in every neighborhood within 100 miles of your city, but it’s not as effective as it used to be. In high school , I was arrested for covering every tree in my neighborhood with offensive film flyers promoting a horror film I made with a group of friends. The image on the flyer was of the main character throwing up, and the local police considered it as lewd as urinating in public. Charges were dropped when the film finally screened at the local film festival and it had the largest audience of the event. Ah, how legal issues can sell a project!

I now like to call every news station in the city telling them that something exciting is happening at a certain location and staging a fake event that promotes the project upon their arrival. Word of mouth is the best promotion tool, so other methods of getting attention could be by prank calling radio stations pretending to have something intelligent to say and when they get you on the air, simply plug away. Or, if you want to be a bit more extreme, just fake your own death and leave a false suicide note that promotes your film. Tell them to screen your movie at your own funeral. Imagine that publicity. Then, once the air has settled, just begin making movies again under a new name. This idea however is only suited for the most extreme, most passionate, and probably the most insane of the lot.

This one is my favorite. I grew up in a small, conservative community and I began questioning authority at a very early age. I hold the same mentality while making a film. Most of the time, people who tell you “no” are simply doing it out of habit. Therefore, it is always beneficial to stop and think, and to never go along with something just because they said so. I understand this is a broad idea, yet it is extremely important for the independent artist. If I had a dollar for the amount of moments in my life when people told me there was no way in hell I could become a filmmaker by making movies on a Hi 8 video camera, I would be a millionaire. (At least then I could afford a better camera!)

If someone says no to you, including the police, ask them why. Challenge them. Get them angry. Make them question themselves. When they say no to you again, follow through with your scene anyway. The power of protest can be amazingly strong. Imagine how many amazing films would not have been made had the filmmaker followed the rules. Just be sure to map out your escape path.

5. Screen your film anywhere! And I mean, ANYWHERE.

I have just about screened my work at every type of venue or platform imaginable, from family living rooms to abandoned bowling alleys and warehouses. Don’t be discouraged if the audience doesn’t react the way you planned, as each screening is a gamble, especially in locations not generally suited for seasoned filmgoers.

A great story I heard from fellow no budget filmmaker was how he once used his school’s computer library to screen his work by uploading it online and playing it on every screen in the room. Though I’m sure the ‘screening’ didn’t last long, it is exactly the type of attitude I adore and appreciate in a filmmaker. Maybe next time he could try doing this technique at a city library, town hall or even at an Apple store!

In the end, we have the freedom and opportunity to make the films we want to make, without any loss of creative control. Please do not let anything stand in your way. I look forward to seeing your film.

This Article is related to: Toolkit and tagged Inside Info, Toolkit