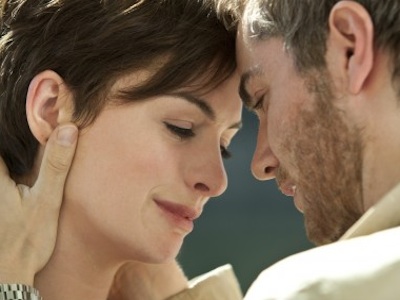 Anne Hathaway’s faux British accent might be the first obvious conceit in “One Day,” but not its most cumbersome. That distinction belongs to the eponymous structure, a claustrophobic device that follows a pair of best friends over the course of a 22-year period, but only on many versions of July 15th.

Locked into this oppressive structure from start to finish, “One Day” continually reboots its tone. Initially, the platonic relationship of recent college grads Emma (Hathaway) and Dexter (Jim Sturgess) comes across like a serene take on “When Harry Met Sally” before it drifts into darker territory. However, from one year to the next, “One Day” avoids fleshing out the story and tells the same one over and over again.

Adapted from David Nicholls’ novel by Lone Scherfig (working with Nicholls’ screenplay), “One Day” finds the director with enough momentum from the success of her astute period piece “An Education” to deliver a similarly delicate two-hander, but in this case the narrative lacks a strategic purpose. After agreeing to remain friends when their bedroom antics don’t pan out in 1988, Emma and Dexter become consultants in each other’s fluctuating lifestyles. While Emma remains stuck in a dead-end waitressing gig and Dexter turns into a vapid television star, they look to each other to broadcast their complaints.

Time passes with the ease of the caption that repeatedly pops up on the screen. Benoit Delhomme’s cinematography lends a sunny, expressive vibe to the proceedings, and a chronologically astute soundtrack keys us into each new period by playing the singles of the moment. The actors are game to show the wear and tear of the aging in virtually every other scene, but the speed of their progress grows tiresome. Scherfig constantly hits the reboot button, moving the actors closer together from year to year, but casting them in the same uninspired melodramatic romance.

Covering 22 years of ups and downs, “One Day” oscillates between Emma’s dissatisfied relationship with an unfunny comic (Rafe Spall) and Dex’s grief over an estranged relationship with his late mother (Patricia Clarkson). In dialogue (and sometimes on vacation) with each other, the two pals grow increasingly certain that they belong together. For a while, this ritualistic acknowledgement works thanks to the fundamental appeal that both actors bring to their perpetually lonesome characters. But the story never allows them to develop beyond the plot demands that they grow slightly older and wiser every few minutes.

After a dozen years’ worth of scenes, “One Day” lags before it goes into a tailspin. Scherfig ably directs terse exchanges and fawning expressions of the two leads’ mounting desires, but can’t find the connective tissue to string it all together. “One Day” works as a succession of short films, each demonstrating the potential for a greater story locked away in the context of another unexplored year. As a single work, however, it’s just a string of do-overs.

HOW WILL IT PLAY? With the charisma of its two leads and a one-sheet that suggests gentle summer counterprogramming to the bigger blockbuster fare, “One Day” is likely to do solid business at the box office in limited release for its first weekend, but probably won’t gain much traction in awards season.

This Article is related to: Reviews and tagged In Theaters, One Day