The 7 Indie Films You Must See This August 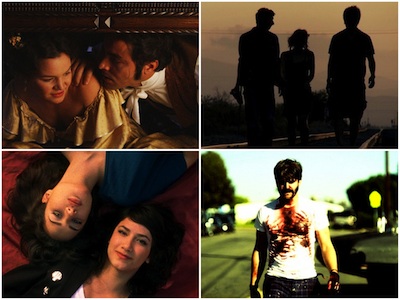 There’s a whopping 25 films listed on indieWIRE’s August calendar. From an apocalyptic love story to the best race-car driver who ever lived, check out indieWIRE‘s picks for the seven best options, and then check out the full calendar or iW’s summer movie preview; there’s many worthy films that didn’t make this list.

What’s The Deal? From first time Iranian-American filmmaker Maryam Keshavarz, “Circumstance” takes on culture wars in contemporary Iran through the story of a wealthy family that struggles to contain a teenager’s growing sexual rebellion and her brother’s dangerous obsession.

Who’s Already Seen It? Eight critics gave it an average of A- on the film’s criticWIRE page.

Why It’s a Must See: Winning the audience award at Sundance is a pretty good suggestion of quality (especially when you beat out the likes of “Martha Marcy May Marlene,” “Like Crazy” and “Take Shelter”), especially when critics are in agreement, which they certainly have been with “Circumstance.”

What’s The Deal? Legendary Chilean director (though he has worked mostly in France since the ’70s) Raoul Ruiz gives us the first film of his sixth decade of filmmaking with “Mysteries of Lisbon.” An adaptation of a famous 19th-century novel by Portuguese author Camilo Castelo Branco, the film focuses on the child of an ill-fated romance between two aristocrats who are forbidden to marry. Many thought “Lisbon” would be Ruiz’s final film, but thankfully surgery for liver cancer saved his life.

Who’s Already Seen It? 15 critics gave it an average of A- on the film’s criticWIRE page.

Why It’s a Must See: At 257 minutes long, its no quick trip to the art house (it was released as a TV mini-series in some markets, similar to “Carlos”), but it’s definitely a worthwhile one. Since its debut at last year’s Toronto International Film Festival last year, “Lisbon” has been lauded left and right, averaging one of the highest scores on criticWIRE among any release so far this year.

What’s The Deal? Asif Kapadia’s doc is the story of Ayrton Senna, perhaps the greatest race-car driver who ever lived. In the mid ’80s, Senna burst onto the world of Formula One racing. As a Brazilian in a predominantly European sport, he had to fight hard both on (against his nemesis, French World Champion Alain Prost) and off (against the politics which infest the sport) the track.

Who’s Already Seen It? Four critics gave it an average of A- on the film’s criticWIRE page.

Why It’s a Must See: Sure to be one of the best-reviewed documentaries of the summer, “Senna” has been winning over audiences at film festivals left and right all year. Producers Distribution Agency will give general audiences the chance to feel the same this month.

What’s The Deal? The second feature film from Mike Ott, this heavily improvised film follows a Japanese brother (Rintaro Sawamoto) and sister (Atsuko Okatsuka, who also co-wrote the script) who find themselves in Littlerock, California when their car breaks down. After meeting locals (including a particularly eccentric loner played pitch-perfectly by newcomer Cory Zacharia), the sister is charmed into staying behind while her brother continues on.

Who’s Already Seen It? Four critics gave it an average of A- on the film’s criticWIRE page.

Why It’s a Must See: Winner of both the “Best Film Not Screening at a Theater Near You” award at the Gothams and the “Someone To Watch” award at the Indie Spirits, Ott’s film could very well mark the entrance of a strong new voice in American indie cinema.

-continues on the next page-

What’s The Deal? DIY filmmaking in the truest sense, Evan Glodell’s directorial debut “Bellflower” revolves around two men obsessed with the post-apocalyptic universe of “Mad Max.” Glodell explained to indieWIRE that he spent two and a half years “obsessing over the movie, re-editing and re-shooting shots to try to get the story and idea to come across the way it should.”

Who’s Already Seen It? Eighteen critics gave it an average of B on the film’s criticWIRE page.

Why It’s a Must See: “‘Bellflower’ unquestionably provides a phenomenal showcase for newcomer Glodell that’s all the more impressive given its multi-year production history and minuscule budget, a backstory that should help garner some media attention,” Eric Kohn wrote in his Sundance review.

Who’s Already Seen It? Nine critics gave “Higher Ground” an average of B on the film’s criticWIRE page

Why It’s a Must See: Warmly received at Sundance, it offers the summer a distinctive dose of counter-programming to typical Hollywood fare.

What’s The Deal? Featuring an exceptional cast in Paul Rudd, Elizabeth Banks, Zooey Deschanel, Emily Mortimer, “Brother” finds Rudd playing just that to his three female co-stars. After being kicked out of his home by his ex-girlfriend, Rudd’s character barges into the lives of his three sisters as he attempts to get his life back on track.

Who’s Already Seen It? Twelve critics gave it an average of B+ on the film’s criticWIRE page.

Why It’s a Must See: Snatched up by The Weinstein Company for several million dollars after its world premiere at Sundance, this well-received R-rated comedy should play as an indie alternative to the many R-rated studio success stories so far this summer (“Bridesmaids,” “The Hangover Part II,” “Bad Teacher,” etc).