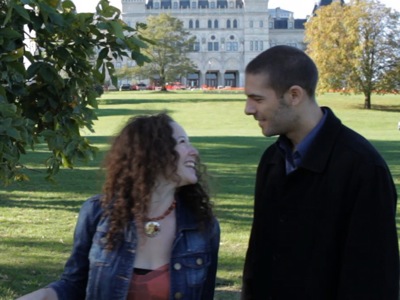 An overworked insurance adjuster must decide between his job and his passion after he accidentally meets his online love interest.

Chris, an overworked insurance adjuster, finds out one Friday layoffs are coming. He sulks at the bar, but then meets Alyza, a girl he’s been talking with online, in real life for the first time. They spend the night together, but Chris doesn’t remember what happened. And Alyza remembers – but won’t tell him. They spend the next day together, trying to find Chris’s lost car keys, and he begins to think there could be more to life than work. But work keeps calling him, so Chris must decide if work is the only thing he can devote himself to.

“There are two major things that motivated me to make ‘Rising Star.’ The first was realizing that my personal life was slipping away, since I was pouring all my energy into my job. I wasn’t pursuing any hobbies I had, like basketball or filmmaking. And the second was my being laid off from that job (the fourth time I’d been laid off). I figured that if I was going to make a movie, it would be while I wasn’t working. So I took advantage of the opportunity, and now the film’s in post-production, and will be completed by year’s end.” — Marty Lang

The film is in post-production now.

For more information and to support this film:

This Article is related to: Toolkit and tagged In The Works, Project of the Day, Toolkit