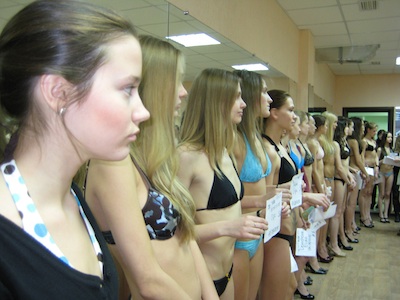 It should come as no great surprise that a movie called “Girl Model” has a dark side. The particularly startling aspect of this sharp non-fiction exposé from documentarians David Redmon and Ashley Sabin is the eerie, visceral horror the haunts every scene. “Girl Model” portrays a business defined by inherent corruption.

Redmon and Sabin focus on two heroines with vastly different perspectives on this troubled world. A jaded model scout, identified only as Ashley, rides the Trans-Siberian railway in search of young recruits she can ship to her Asian clients. One of those selections, an impoverished 13-year-old Siberian recruit named Nadya Vall, heads to Tokyo expecting a payday for her entire family. Toasted by her relatives before heading out, her provincial grandmother says, “Who knows what fate will bring her?”

Ashley has a fairly good idea of the answer and it’s not glamorous. The filmmakers reveal the video diaries from the 15-year veteran scout’s teen years, when she was a model and dealt with the same isolation and confusion that Vall finds once she shows up in Tokyo. Redmon and Sabin travel alongside Vall but barely intrude, leaving no question that she’s lost and clueless. In short time, the girl has found a phone and made a tearful call to her mother in the hopes of going home, but the uncertain promise of a financial reward keep her rooted in purgatory, aimlessly searching for a gig that fails to turn up.

The movie implies that there’s a logic to the unrewarding system that traps Vall and the innumerable girls like her. Nadya’s representative, an affluent man named Tigran, expresses his intention with an absurd idealism. “For me,” he says, “this is a religious matter.” That pronouncement initially goes unchallenged, but Vall’s fate reveals the cracks in any convictions about her road to success. Everyone seems to profit from Vall — except for the girl and her family.

It turns out there’s nothing sacred about this hyper-competitive industry. Sabin and Redmon don’t aim for a complex empirical approach, but they do present an argument, with Vall as their chief rhetorical instrument. One particularly effective contrast cuts from the dolled-up Nadya’s ostentatious DVD clip reel to a decidedly less flattering shot of her in a state of duress. In place of facts and figures that would dominate a more journalistic approach, “Girl Model” is chiefly a visual affair, starting with the opening shot of an audition in which of dozens of prospective young models glance at the camera and flash rehearsed smiles.

“Everyone has their own version of beauty,” Ashley sighs, at once recognizing her bleak job and resigning herself to it. A surgery she faces is another story tangent, bringing the aging scout a different perspective on physical standards than the one demanded by her professional life.

But “Girl Model” doesn’t aim for a redemptive finale. Ashley deems her practice “an addiction” and the cyclical nature of the movie confirms that diagnosis. It ends where it began, with the introduction of another new teen recruit. The conclusion implies that the commodification of the female body is a disease with no obvious cure.

HOW WILL IT PLAY? “Gilr Model” landed distribution in several foreign markets during its successful run at the Toronto International Film Festival. Critical acclaim and strong word-of-mouth should propel it to a healthy life on the festival circuit and strong returns from ancillary markets, if not in theatrical release.

This Article is related to: Festivals and tagged Girl Model, Reviews