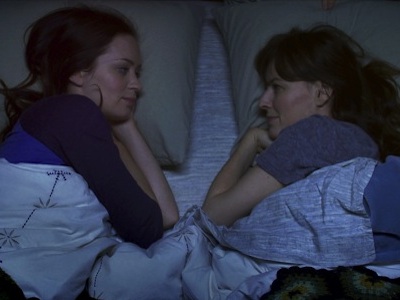 Two years ago, Lynn Shelton’s “Humpday” made waves for its impressive combination of improvised dialogue and keen insight into human relationships, a tricky balance achieved while also seamlessly drifting between comedy and drama. Her follow-up doesn’t expand her range but applies it differently. “Your Sister’s Sister” is another highly enjoyable relationship comedy, but a far quieter and contained work. Fortunately, Shelton stays within the boundaries of the material without overextending it, reaffirming the effectiveness of her homegrown approach.

“Humpday” co-star Mark Duplass plays Jack, an unemployed slacker whose brother Tom dies in an unspecified accident shortly before the movie begins. Tom’s ex-girlfriend Iris (Emily Blunt, one of the two stars in “Your Sister’s Sister” signifying Shelton’s post-“Humpday” career boost) remains best pals with Jack, but worries about his emotional stability. On a whim, she offers up her family cabin on an island in the Pacific Northwest so Jack can seek catharsis in solitude. Once there, however, he runs into Iris’ sister Hannah (Rosemary DeWitt, that other star, in a role initially assigned to Rachel Weisz). A lesbian reeling from the abrupt end of seven-year relationship, Hannah finds solace in the affable Tom’s unexpected presence, and the two bond over a long night of drinking. The blurry evening concludes with an awkward sexual incident made even worse by the oblivious Iris’ sudden presence at the cabin the next morning.

Her arrival provides the main dynamic that keeps “Your Sister’s Sister” moving in interesting directions. While a network of secrets constantly threatens to change the terms of their interactions, the trio attempts to enjoy themselves. Shelton pulls us into their conversations and lets the story meander long enough to let the subtext fade to the background, only to unleash it just in time to let chaos take over. Still, explaining the interlocking plot strands makes “Your Sister’s Sister” sound like a rudimentary sitcom: Jack loves Iris and Iris loves Jack, but neither wants to tell the other one in case the feeling isn’t mutual; Hannah knows about their reservations and has a few of her own.

While that arrangement might sound cliché, the characters never speak in obvious soundbites. “Your Sister’s Sister” has few memorable lines due to its lack of a conventional script, but that’s exactly what makes it click. Like “Humpday,” the movie’s technique is based around an ability to evade writerly phrases and histrionics. “Humpday” worked because the wandering dialogue revolved around a coherent arc, and that restriction has an even stronger cohesiveness here. The second Shelton feature after “My Effortless Brilliance” to primarily take place in a wooden cabin, “Your Sister’s Sister” contains a now-standard form of naturalism used for much humbler purposes. Within the first half hour, it settles into exploring the interactions of only three characters almost always seen in close-ups. With the restraint of an intimate play, Shelton moves from one revealing conversation to another, gradually unearthing the various private interests lurking amid their triangular relationship.

While not an unbridled crowdpleaser on par with “Humpday,” this smaller achievement is endearing for other reasons. The excessive chatter flows nicely thanks to fine-tuned performances and the chemistry to sustain them. Duplass’ feisty energy is matched by DeWitt’s constant smarminess, while Blunt’s shy, fragile behavior balances off the forceful personalities surrounding her. When “Your Sister’s Sister” dips into formula, replete with tired confrontations and sentimental monologues, it loses some of its raw energy. But that misstep is redeemed by the last shot. Like “Humpday,” it leaves the precise fate of the characters open-ended. Shelton’s skill involves an ability to explore familiar situations with a flair for ambiguity, but plenty of payoff.

HOW WILL IT PLAY? Although not destined for the same breakthrough status that propelled “Humpday” to widespread attention, “Your Sister’s Sister” should easily find a home with a midsize distributor and could perform decently in limited release on the basis of its name actors alone.

This Article is related to: Festivals and tagged Reviews, Your Sister's Sister