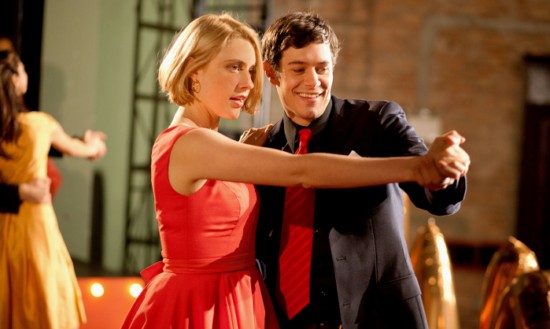 Writer-director Whit Stillman’s insightful 1990 debut, “Metropolitan,” was a smartly envisioned fantasy about the end of the debutante era. “Damsels in Distress,” his first feature in over a dozen years, also works as a fantasy, but a far less purposeful one. Stillman’s lengthy filmmaking absence puts an unfair amount of pressure to deliver something transformative, but he hasn’t risen to the bait. Playing with the quirky stereotypes of upper class college life, Stillman delivers a minor work that’s nevertheless amusing enough if viewed outside the shadow of its superior predecessors.

The opening credits list “the damsels” and “their distress,” a witty tone-setter for the ensuing story. Set almost exclusively on the campus of Seven Oaks University, where female students are in the minority, “Damsels in Distress” opens with exuberant junior Violet (Greta Gerwig) taking lonely newcomer Lily (Analeigh Tipton) under her wing during freshman orientation. While showing Lily around, Violet’s uniquely ostentatious style of speech throws off the comparatively normal Lily, establishing a contrast between the characters that continues throughout the movie. While Lily is a grounded young woman exploring her newfound freedom, Violet inexplicably adheres to Victorian formalities. The dialogue Stillman gives her often wears out its welcome, but still maintains an enjoyably silly internal logic (womanizers are routinely called “operators or playboys”).

If Juno read too much Jane Austen, she might sound like the strangely garrulous Violet, whose world has its own rules. She throws her energy into running the irreverent suicide prevention club, an endeavor mainly based around tap dance therapy and free doughnuts. Gerwig gamely navigates this strange and often inscrutable terrain with constant charm, and the movie’s main appeal rests on her shoulders. The ensuing drama, a contrived relationship story in which Violet falls for Lily’s romantic interest, Charlie (Adam Brody), simply can’t keep up.

Nevertheless, Stillman’s portrayal of campus life is inherently funny. The Roman frat life contains a smattering of blunt stereotypes, including a brawny young man who never learned how to recognize colors, but insists he came to college “to hit the books.” The epiphany has has when he figures out how to name the bands of a rainbow provides one of the movie’s high points. Stillman enthusiastically pokes fun at the notion of a rich class pouring its money into the education of undeserved disciples, but his analysis doesn’t run very deep.

In between the surreal flourishes and gags, “Damsels in Distress” meanders along without the energy needed to justify its idiosyncrasies. For long stretches of time, the drama of campus life has more in common with “The House Bunny” or an episode of “Gossip Girl” than the insightful humor Stillman clearly aims for.

Still, whenever Stillman shoots for a stranger conceit, the movie comes alive with a zesty identity: The climactic song-and-dance number makes you wish there were several more. “Damsels in Distress” ends with the sense that Stillman still has enough creative lifeblood left in him to keep his crosshairs on the ebb and flow of youth experience. “There’s enough material here for a lifetime of social work,” Violet says about the campus, but she could also be talking about Stillman’s concise filmography and its potential to continue its expansion.

HOW WILL IT PLAY? Set for distribution with Sony Pictures Classics, “Damsels in Distress” will likely receive mixed reviews and similar word-of-mouth, making it a tough sell. However, Stillman’s lingering appeal and the movie’s large cast of young faces may help propel it to solid numbers in limited release.

This Article is related to: Festivals and tagged Damsels in Distress, Reviews